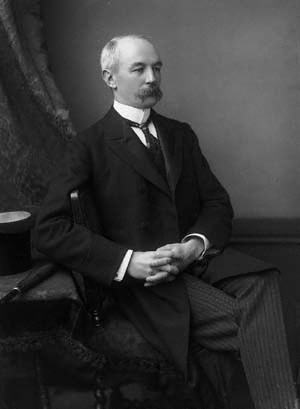 During the last quarter of the nineteenth century a number of highly successful firms developed in the Scotch whisky industry. One of the most successful was John Dewar & Sons Ltd of Perth. The firm had been founded in 1846 by John Dewar, the son of a crofter. Born in Aberfeldy in 1806 and educated at the parish school, he trained as a joiner but in 1828 moved to Perth to take up an offer of employment from a relative, James Macdonald, a wine merchant. They formed a partnership in 1837 which was dissolved nine years later when Dewar decided to begin his own business. When he died in 1880 the business was still mainly local though it made sufficient profit for him to leave an estate worth over £30,000.

John Alexander and Thomas Robert Dewar joined the firm in 1879 and 1881 respectively. Both had been educated at Perth Academy and had served the customary apprenticeship in other wine and spirit firms, John with Condamine & Co. of Leith, Thomas with Forrest and Turnbull of Leith and later with Robertson and Baxter of Glasgow. Together the brothers created a firm whose product became a household name. Profit figures indicate their achievement. When their father died annual profits were a mere £1321. By 1900 they were £59,000 and by 1925, when the firm merged with the Distillers Company, profits were over £1 million.

The brothers' characters were very different. John was a cautious, dour individual, very much absorbed by finance and administration. As older brother he was acutely aware of the family's dependence on the firm and yet wanted it to expand. His main priority was not heavy advertising expenditure but a gradual expansion of sales, coupled with the reinvestment of available profits in mature whisky stocks. He was twice married. His first wife, whom he married in 1884, was Joan, daughter of William Tod, farmer; they had five daughters and one son. She died in 1899, and in 1905 he married Margaret, daughter of Henry Holland, merchant; they had one daughter and one son. Thomas Dewar, who never married, was by contrast an extrovert and an extremely effective whisky salesman. John's career was spent in Perth while Thomas pioneered new markets in England and overseas. Their attributes thus complemented one another where business was concerned. Their political beliefs, however, were a very different matter, with John a Liberal and Thomas an active Conservative and Unionist. As Liberal MP for Inverness-shire from 1900 to 1916, John was to find himself in opposition to his party over the people's budget of 1909 with its increased taxation on spirits, and subsequently became a prominent spokesman for the whisky trade.

John became a partner in 1879, the year before his father's death, and his brother in 1885 when the firm was styled John Dewar & Sons. The firm made modest progress until June 1890 when John obtained a credit of £12,000 from the Distillers Company (DCL) in exchange for Dewars tying their purchases of grain whisky to the DCL. The credit, soon increased to over £75,000, freed resources for investment in whisky stocks and branch offices, and allowed T. R. Dewar to make an international sales tour between 1891 and 1893, during which he visited twenty-six countries, appointed thirty-two agents, and arranged for opening consignments to each country he had visited. The tour cost £14,000, a hefty increase in costs when current profits were less than £7000 a year, but it established Dewars on a worldwide basis. Such sales trips became a hallmark of the firm's approach to exporting. T. R. Dewar undertook another in 1898 and by 1914 the firm's representatives had made five such campaigns.

Dewars' ‘take-off’ was greatly assisted by DCL and by 1896, when Dewars' debts to DCL were in excess of stock in bond at £76,790, the board of DCL noted that 'Although this was considered a very large risk to have with any single firm, it was not deemed necessary to take any steps to reduce it as the firm … were thought to be of undoubted stability' (United Distillers archive, DCL, board minute book 8, 15 Oct 1896). Reliance on DCL diminished after 1897 when Dewars made a public share issue to provide resources for further expansion. Significantly, though, John Dewar advised DCL that Dewars would continue 'to give the DCL a preference in their grain spirit orders' (ibid., 9 May 1897). His close relationship with DCL and its managing director, William Ross, later proved crucially important.

Although Dewars' home sales continued to expand, despite the declining demand for spirits in Britain after 1900, exports were much more important for they were three times as profitable as home sales. With the largest volume of export sales among the ‘big three’ blending firms (Buchanan, Dewars, and Walkers), Dewars were well placed in the amalgamation discussions which began in April 1909. An amalgamation of the ‘big three’ proved unattainable in the pre-war years but the Dewar brothers joined forces with James Buchanan in a holding company, Scotch Whisky Brands, in 1915. This was subsequently renamed Buchanan-Dewar in 1919, and merged along with John Walker & Sons in the Distillers Company in 1925.

John Dewar played a greater role in the merger discussions than his brother on account of his mastery of financial detail and because of his friendship with William Ross, DCL's managing director. Dewar and Ross came to share a common set of beliefs about the problems facing the Scotch whisky industry. They wished to see greater stability in the trade, a reduction in the influence of speculators, and an end to certain 'unbusiness like methods', especially 'the very extravagant distribution of advertising material' (United Distillers archive, John Dewar & Sons Ltd, letter-book, 18 Aug 1900).

Persuading the Walker family that an amalgamation between the ‘big three’ and the DCL was desirable proved extremely difficult. John Dewar's contribution was to urge that it was the future earning power of the combine that was vital, not the precise value put on family interests. He also persuaded the other participants that Ross should be the chairman of the combine. His only major disagreement with Ross was over the location of the head office. Dewar, following his financial adviser, Sir Gilbert Garnsey, argued that London was essential if the company was to have the confidence of the City. Ross thought it inconceivable that the leading firm in the Scotch whisky industry should be based outside Scotland, a view that ultimately prevailed.

John and Thomas Dewar were appointed to the board of Distillers, but were too far advanced in their careers to play a significant part in shaping future developments, as DCL became increasingly drawn into the industrial alcohol and chemical trades in response to the decline in whisky consumption. For them the amalgamation was more important as a means of rearranging their financial interests.

John Dewar had many other interests as a politician, town and county councillor, landowner, and agriculturist. He became a member of Perth town council in 1883, was elected treasurer in 1888, and served as lord provost from 1893 to 1899, pushing through local housing and sanitary reforms. In 1907 he was created a baronet and in 1916 was elevated to the peerage as Baron Forteviot of Dupplin, the first of the 'whisky barons'. His title derived from the estate of Dupplin which he purchased from the earl of Kinnoull in 1910 for £249,000. As a landowner, Lord Forteviot set about the task of rural regeneration, building the model village of Forteviot in the style of a small Dutch township. He held directorships in Longmorn–Glenlivet Distilleries, the Dundee, Perth and London Shipping Company, and the Bank of Scotland, and was chairman of John Shields & Co.

Part of John Dewar's fortune was used for philanthropic purposes. An estimated £50,000 was devoted to projects in Perth such as the restoration of St John's Church as a war memorial, the building and equipping of a maternity ward at Perth Royal Infirmary, and the building of a new model lodging house in Skinnergate. He also founded the Forteviot Charitable Trust with an endowment of £60,000 for the benefit of the city of Perth and its inhabitants. Other public service included chairing two commissions of inquiry into medical conditions in the highlands and islands of Scotland, membership of Perth county council and education authority, chairmanship of the Territorial Force Association, and deputy lord lieutenancy of Perthshire.

Thomas Dewar was active in civic and political life in London: he served on the London county council for West Marylebone from 1892 to 1895, and was Conservative MP for the St George's division of Tower Hamlets in London from 1900 to 1906. He became lieutenant of the City of London. Knighted in 1902, he received a baronetcy in 1917, and was created Baron Dewar of Homestall in 1919. His interests included painting, shooting, racing, and coursing.

Lord Forteviot died at Perth on 23 November 1929 leaving an estate worth £4.4 million. His heir, John Dewar MC, had been appointed to the board of the DCL in 1925 and became chairman in September 1937. His brother, Lord Dewar, died on 11 April 1930 at his Sussex home, The Homestall, East Grinstead, leaving an estate valued at over £5 million.