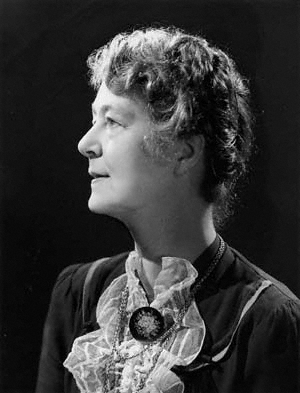 Mann [née Stewart], Jean [Janet] (1889–1964), politician and housing reformer, was born Janet Stewart, at 22 Calder Street, Polmadie, east Renfrewshire, on 2 July 1889. She was the daughter of William Stewart, an iron moulder and active trade unionist, who was an enduring influence on her radical outlook, and his wife, Annie, née Morrison. Polmadie was an industrial district dominated by extensive locomotive engineering works, eventually absorbed into Glasgow in 1891. The Stewarts later moved to the Ibrox district of Govan, where she received an education at Kinning Park School and then up to secondary level at the prestigious Bellahouston Academy. She started working life as a cashier with a local firm, but marriage to William Lawrence Mann (c.1878–1958), a commercial traveller and a widower, directed her energies towards child-rearing. Married on 18 December 1908, the couple had six children, and subsequent appraisals of Jean Mann made much of her ability to combine family commitments with an active public life. It was an image that she assiduously cultivated, to demonstrate that she had a keen understanding of issues pertaining to ‘housewives’, especially consumer rights and housing.

Rothesay, on the island of Bute, was where Jean Mann first came to prominence in the Independent Labour Party (ILP). The family moved there after the First World War, and her husband, as local branch chairman, persuaded her to take on the task of secretary. She already had a history of social activism in the United Free Church of Scotland in Kinning Park, and her early radical Liberalism gradually developed into Christian socialism. Although latterly she did not emphasize her religious affinities, perhaps because of the pervasive sectarian dimension to west of Scotland politics, they sustained her throughout her life. There was a strong missionary edge to her belief that housing and the environment helped to shape moral character, and were thus fundamental areas for political action.

Although she was an unsuccessful candidate for Rothesay town council in 1923 and 1924, Mann nevertheless built up a reputation as an impressive public speaker, much in demand on the ILP propaganda circuit. In 1927 she and her husband returned to Glasgow, which served as a more effective base to further her political ambitions. She was eventually adopted as Labour candidate for the parliamentary constituency of West Renfrewshire, although she failed to win the seat in 1931 and 1935. In her semi-autobiographical book, Woman in Parliament (1962), she wrote about her reaction to ILP disaffiliation from the Labour Party in 1932, describing the Maxton-led decision as 'an honest, but foolish one' (p. 122). She chose to stay within the official party, although the tensions engendered by the split remained with her and coloured her attitude to the bitter internal divisions of the 1950s.

Mann's municipal career took off in 1931 when she topped the poll in a by-election for the Provan ward of Glasgow corporation. This was despite the opposition of the Roman Catholic church, which had been unable to elicit a response from her on the issue of birth control. Mann's stance was less radical than her silence would suggest, as she later made no secret of her concern about the trend towards limiting family size. Glasgow's notorious inter-war housing congestion was by no means representative of Scotland as a whole, and she advocated planned dispersal of the urban population to encourage balanced demographic growth.

As organizing secretary of the Garden Cities and Town Planning Association of Scotland, Mann was also an ardent publicist for the ideas of planning theorists such as Ebenezer Howard and Patrick Abercrombie. This interest made her the obvious choice to serve as Labour's housing convener, after the party won control of Glasgow corporation for the first time in 1933. Her influence was evident in the conscious shift in corporation policy from tenement construction to the low-rise 'cottage' style of dwelling that she believed to be essential for community well-being. Inspired by model municipal developments, notably Manchester's Wythenshawe Garden City, Mann attempted to raise standards in the new housing estates being built on peripheral land acquired by the corporation. However, finance ultimately limited her scope for action, and tensions emerged within the Labour group because she implacably opposed more cost-effective multi-storey housing. In 1938 Mann retired abruptly from the corporation, having achieved hitherto unprecedented civic status for a woman in Glasgow as senior magistrate.

After 1935 Mann was adopted as prospective Labour candidate for the Dundee constituency, but asked to be released from the commitment during the Second World War. In the Labour landslide of 1945 she was returned for Coatbridge, covering the Lanarkshire steel-producing community of the Monklands, in succession to James Barr, whose radical sentiments on land reform and sympathies for Scottish home rule she shared. By this time she was well known in Scotland for her forthright views on housing and planning. As a member of the Scottish Housing Advisory Committee, appointed by Thomas Johnston, the wartime secretary of state for Scotland, she strongly criticized recommendations to encourage high-rise building in towns. Mann continued her housing interest in parliament, where she became a noted speaker on a range of issues relating to social welfare. Austerity and food shortages were themes which she pursued relentlessly, taking on the role of housewives' champion in challenging inconsistencies in rationing policy and the notorious activities of black marketeers. In Woman in Parliament, she wrote with enthusiasm of her work during the immediate post-war period, although she made pointed reference to the male chauvinism she encountered in the House of Commons and the mutual support this engendered among women MPs.

The reorganization of parliamentary boundaries meant that from 1950 until her retirement in 1959 Mann represented the constituency of Coatbridge and Airdrie. There was a vigorous and well-organized local Unionist (Conservative) Association, which throughout this time persistently pressurized Mann about the stark left–right polarization that had emerged within the Labour Party. Yet Mann was a declared opponent of the Bevanites; a stance which secured the support of the right-wing trade union leader, Arthur Deakin, who helped to promote her to one of the women's seats on Labour's national executive committee (NEC) in 1953. Two years later she was at the centre of an acrimonious NEC argument over whether to expel Aneurin Bevan from the party, after he had voted against a Labour amendment in a Commons defence debate. Mann later claimed that she decided against expulsion in the interests of unity, thus turning the vote in Bevan's favour by the narrowest of margins. Some on the right of the party accused her of a failure of nerve, but there was some consistency in her approach, as throughout her political career Mann had been distinguished by single-mindedness. She also had personal esteem for Bevan, although pointedly not for the Bevanites, whom she regarded as being too tainted by communist influences.

That Mann was not afraid to embrace controversy was demonstrated in 1958, when she resigned from the NEC following an altercation over the appointment of a party organizer for Scotland. As an MP, she devoted much of her time to child-welfare and consumer affairs, and she was closely associated with campaigns to encourage the fostering of children in care and to raise public consciousness on the need for fire safety at home. The latter issue had particular resonance, as years previously one of her own children had died as a result of a fire accident. She did not contest her seat in the 1959 general election, and after leaving parliament she retired to Gourock, in Renfrewshire, where she was active as a town councillor. She died at Larkfield Hospital, Greenock, Renfrewshire, on 21 March 1964 after a long illness and was buried in Gourock cemetery on 23 March. Obituaries paid tribute to her pugnacious qualities and boundless energy.

A small, wiry woman, Mann projected a feisty, down-to-earth approach, which comes across strikingly in her speeches both within parliament and beyond. Although her feminism was ambiguous, given her moral emphasis on motherhood and family values, Mann consistently spoke out on a range of women's issues at a time when such matters were not normally given priority among MPs. She also deserves to be remembered as an important, pioneering woman in Scottish politics.