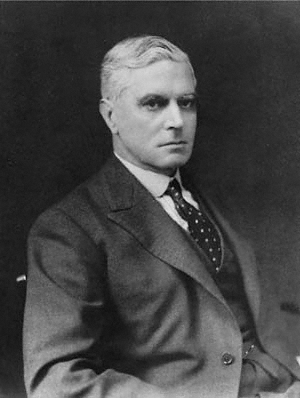 Walker, Sir Alexander (1869–1950), whisky blender and industrialist, was born on 22 March 1869 at Wallace Bank, Kilmarnock, the third and youngest son of Alexander Walker, chairman of John Walker & Sons, and his wife, Isabella (née McKemmie). Educated at Ayr Academy he subsequently had a legal training as well as a trade apprenticeship with Robertson and Baxter Ltd, wine and spirit merchants of Glasgow. In 1888 he joined the family business, one of the largest and oldest blending houses, and two years later was elected to the board. In 1895 he married Rosaline, daughter of Arthur S. Josling of Arkley, Hertfordshire; they had two sons and two daughters.

In 1908 Walker commissioned the artist Tom Brown to portray his grandfather, the original Johnnie Walker, in a sketch for advertisements; in different forms it continues in use today. In 1913 Walker became joint managing director of John Walker & Sons. He worked for the Ministry of Munitions during the First World War, was a member of the munitions disposal board, and was knighted in 1920 for his wartime service. When Walkers became a public company in 1923 Sir Alexander became chairman, and when two years later the firm merged with the Distillers Company Ltd (DCL), along with Buchanan–Dewar Ltd, he was elected to the board of DCL.

Walker was renowned for his independent views on trade matters, especially when he attempted, unsuccessfully, to persuade the royal commission on whisky (1908–9) that whisky should be made from a mash containing not less than 30 per cent of malted barley and that blended whisky should contain at least 50 per cent malt whisky. At the royal commission on licensing (1931) he rejected the view that the trade should refrain from exporting to the USA during prohibition. His independence, and the need to consult other family members, prolonged the negotiations leading to the amalgamation with DCL in 1925, much to the irritation of the other parties.

As one of DCL's younger and more dynamic directors Walker played a prominent role in the group's development. With a declining demand for whisky and gin, DCL moved into the production of industrial alcohol and solvents and via this into a range of organic chemicals. Many complex problems accompanied diversification. These included DCL's relations with much larger competing firms like ICI and I. G. Farben; the large capital investment which was required; and a highly unsettled technology in which the choice of raw material lay between molasses, where DCL had invested heavily, oil, where petroleum producers were firmly ensconced, and coal, the only domestically produced raw material. The most sensitive issue was the appropriate form of organization, because the capital for diversification had to come from DCL's potable activities. This meant that diversification required the approval of the blenders, the dominant group on the board, and not all were prepared to take a long-term view of the chemical business. Several blenders saw diversification as a short-term insurance policy which could be discarded when the potable spirits market recovered. Ranged against them were those who had built the chemical business and wanted DCL to adopt a divisional structure, splitting it into two divisions, whisky and industrial.

When, in 1931, DCL's chairman was absent through illness a small finance and executive committee was established as a temporary expedient. Walker was a member and argued successfully for greater centralized control. The new management structure in 1935 rejected the divisional approach and established a management committee in which each member controlled a group of subsidiary companies and departments. Walker took charge of research and development and many of the chemical interests. His chairmanship of the management committee (from 1937 to 1939) saw DCL move into the marketing of finished products in addition to the production of raw materials and intermediates. DCL negotiated a ‘spheres of interest’ agreement with ICI and initiated joint research with the Royal Dutch Shell and Anglo-Iranian Oil companies for synthetic alcohol production. Joint ventures with the British government for the production of strategically important chemicals were also started well before the outbreak of war.

Walker's great contribution was his perception of the problems accompanying DCL's late entry into chemicals, especially his desire to avoid ‘encirclement’, a situation where DCL did not control the markets for chemical products. Although his technical knowledge sometimes fell short of what the technical staff desired, his presence on the research and development committee reassured the blenders and, in the context of the 1930s, he bridged the gulf between potable and non-potable activities. Later in 1967, DCL was to dispose of much of its industrial division to British Petroleum.

Walker had many other interests. He was a member of the Ayrshire Electricity Board, chairman of the Ayrshire gas supply committee, and chairman of a Board of Trade investigation into the feasibility of a gas grid for the west of Scotland, as well as holding several directorships. A trustee of C. K. Marr's bequest for the erection of a further education college at Troon, he became chairman of the governors of Marr College when it opened in 1934. Walker gifted land to the burgh and promoted the Troon bathing pool. In 1944 he donated £10,000 to the town council for a centre for the treatment of rheumatism. He was rewarded in 1946 for his services to the town with the freedom of Troon, the first person to receive this honour. By then he was the only survivor of the nine commissioners appointed to govern the burgh when it was formed in 1896. Predeceased by his wife in 1948, Walker died at Piersland, Troon, on 13 May 1950 from a coronary thrombosis.