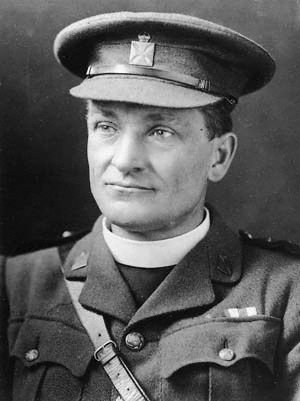 Hardy, Theodore Bayley (1863–1918), army chaplain, was born on 20 October 1863 in the Southernhay district of Exeter. He was the son of George Hardy, a commercial traveller, and his wife, Sarah Richardson; George was her second husband, her first having died. George himself died in 1866 and Sarah supported her large family (several boys from the first marriage and two, including Theodore, from the second) by running a preparatory school.

Theodore was educated at home until he was nine and later attended the City of London School (1879–82), from where he went on to London University. On 13 September 1888 he married Florence Elizabeth Hastings, the third daughter of William Hastings, a Belfast civil engineer. Hardy graduated BA in 1889 and then taught for two years in London before moving to teach at Nottingham high school, where he remained for sixteen years. During this period he was ordained deacon (1898) and then priest (1899) and was licensed as a curate for Burton Joyce.

In 1907 Hardy became headmaster of a small establishment, Bentham grammar school, which had the advantage of being situated in Hardy's beloved countryside, as well as providing closer access to his wife's family in Northern Ireland. In 1913 Florence was diagnosed terminally ill, and so Hardy resigned from the school and took the living of Hutton Roof (in the diocese of Carlisle), which gave him time to nurse her. In June 1914 his wife died; their two children had left home—William studying to be a doctor in Belfast, and Elizabeth at London University. After the war broke out Hardy tried numerous times to enlist as a chaplain, and even considered alternatives, such as going as a volunteer stretcher bearer, to which end he attended an ambulance class.

Eventually Hardy was accepted as a chaplain, being commissioned as a temporary chaplain of the fourth class on 16 September 1916, despite his advanced years (he was almost fifty-three), and proceeded to France. He was attached to the infantry base depots at Étaples but pressed insistently to be sent up to the line and in December 1916 joined the 8th Lincolnshire regiment (and later was also attached to the 8th Somerset light infantry), part of 63rd brigade of the 37th division. He saw service in the Loos, Arras, Ypres salient, Somme, and Cambrai sectors.

Hardy soon became renowned for his devotion to the men under his pastoral charge. He insisted on staying in the front-line trenches, anxious to be of as much use as possible to those who were most threatened. His willingness to risk his life in looking after the wounded, or trying to ensure that men were tended, or buried, or brought in from no man's land endeared him to those who could be cynical about their chaplains.

The only still photographs of Hardy in the field show him in typical mode, working at the advanced dressing station at Feuchy chapel, near Arras. He refused all attempts to move him back from the line, even if only to give him a rest; he frequently said that he was a dreadful coward, but that his place was at the front, and in any case, with his wife dead and his children grown up, the prospect of death did not perturb him. He told his senior chaplain, the Revd Geoffrey Vallings DSO, that he 'loved his children intensely but that he believed that he could do no better, if God so willed, than join his beloved wife in the presence of the Lord' (Raw, 44).

In the opening days of third Ypres (his division was in action to the east of Wytschaete) Hardy was made DSO (gazetted 18 October 1917). It was awarded for his concern for the wounded, in particular for staying out with a wounded man, trapped in mud, in no man's land for many hours and under constant fire, and despite the fact that his own wrist was broken. He remained with this man until he died. Hardy collapsed with exhaustion shortly afterwards. He was to win the MC in October 1917 for his bravery near Hill 60 (Ypres salient) when he assisted with the evacuation of the wounded from a heavy battery position while it was under a severe bombardment.

During the dismal winter of 1917–18 the division remained in the salient; Hardy invariably accompanied the ration parties to the front and then stayed on and visited the outpost positions, bringing cigarettes, sweets, and conversation. His arrival was frequently accompanied by the sentence with which he is most popularly identified: 'It's only me, boys' (Raw, 61).

In a series of incidents in April 1918 the bravery that Hardy displayed was recognized by the award of the Victoria Cross, gazetted on 11 July 1918. Among other things he stayed with and tended a wounded officer some 10 yards from a German machine-gun position and then sought help to bring him back to the British lines; he rescued a man buried by a shell and endeavoured to save another, all the time under heavy shell fire; and he saved the life of an officer by tending his wounds, received out in no man's land while on a patrol.

Theodore Hardy was now the most highly decorated chaplain in the army; he was presented with the VC by George V at Frohen-le-Grand on 9 August, the event being briefly captured on film. He was wounded on 10 October 1918 while returning from a visit to forward troops who had recently crossed the River Selle. He died of his wounds and pneumonia at the no. 2 base (Red Cross) hospital at Rouen on 18 October two days short of his fifty-fifth birthday, and was buried in the vast Commonwealth war graves cemetery, the St Sever cemetery extension in Rouen, on October 20. A memorial was erected in Carlisle Cathedral.