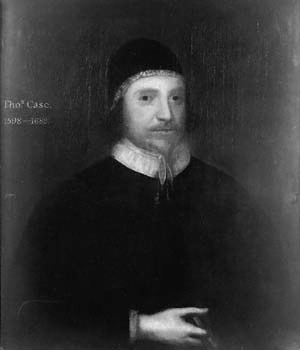 Case, Thomas (bap. 1598, d. 1682), clergyman and ejected minister, was born in Boxley in Kent, the son of George Case, vicar of Boxley, and baptized there on 20 August 1598. Having attended school in Canterbury and then at Merchant Taylors', he entered Christ Church, Oxford, on the recommendation of Archbishop Tobie Matthew of York, graduating BA in June 1620 and proceeding MA in June 1623. After returning to Kent he preached there before being ordained in Norwich on 24 September 1626. He then took up a curacy with Richard Heyrick in North Repps, Norfolk, and became rector of Erpingham, Norfolk, on 4 January 1629. In 1631 he married Ann Pots at Itteringham in the same county. Despite being licensed as a preacher as late as 9 April 1635, he fell victim to the anti-puritan drive urged by Canterbury on Norwich's Bishop Matthew Wren and was cited into the Norwich consistory court on 14 November 1637.

With Heyrick, Case now moved to the Manchester area, where the protection of such families as the Booths and Mosleys sheltered the puritan tradition that had become entrenched in the area since Elizabeth's reign. His second marriage, on 8 August 1637, in Stockport, Cheshire, to Ann (d. 1696), daughter of Oswald Mosley of Manchester, and widow of Robert Booth of Salford, brought him into the heart of the lay leadership of puritanism in the north-west. Case had already developed his puritan views before or during the period of the Laudian ascendancy, but it may be that his treatment at the hands of Wren intensified and embittered his anti-Laudian animus. By 1641 he was calling for 'root-and-branch' abolition of episcopacy and, indeed, in apocalyptic vein, for a total renewal of English society. A preacher to the Long Parliament, on 15 February 1642 Case also became lecturer in St Martin-in-the-Fields, a position providing a platform for what Wood saw as his quest for political popularity in the world of the capital's parliamentarian puritanism, in which he became associated, as chaplain, with London's anti-royalist MP and mayor from August 1642, Isaac Penington. Case was probably 'T. C. one of the chaplains in the army', the author of the 1642 A More True and Exact Relation of the Battaile of Keynton—a report on Edgehill.

Despite a secondary interest in the north-west—he became rector of Stockport, Cheshire, on 31 July 1645—Case's ministerial career was thereafter heavily focused on London, where he was made rector of St Mary Magdalen, Milk Street. He was 'laborious and faithful' in that ministry (Nonconformist's Memorial, 1.154), introducing the successful 'Morning Exercise' series of lectures, and in 1643 urging the enthusiastic adoption of the presbyterian solemn league and covenant. However, Case's proximity to the centre of parliamentarian power probably intensified the deeply politicized cast of his godliness. He preached against mercy for royalists and became notorious for inviting to communion congregants 'that have freely and liberally contributed to the Parliament for the defence of God's cause and the gospel' (Pearl, 232). It was hardly surprising that he was in 1643 appointed to the Westminster assembly of divines.

By 1645, however, Case, his earlier millenarianism dulled, felt that the revolution should be halted, although he still offered thanksgiving for the surrender of Chester to parliament in his fast sermon of February 1646 before the house, A Model of True Spiritual Thankfulnesse. He was convinced of the validity of the presbyterian covenant and his political alignment, manifest in his signature of the testimony of the London presbyterian ministers of 1647, was firmly with the presbyterians and opposed to the army and the Independents. Deeply suspicious of the proceedings of 1648 leading to Charles I's trial, in 1649 he signed the vindication, a similar manifesto. By this time the Independents were in the ascendant and Case was removed from St Mary Magdalen in 1650 for refusing the republican engagement. More actively, Case, with others including Heyrick, became involved in Christopher Love's presbyterian royalist plot against the regicide regime. Case was imprisoned in the Tower from 19 May to 15 October 1651, 'detained touching the late treason and conspiracy' (CSP dom., 1651, 457). Here he faced the most perilous passage of his entire career; his prison meditations were published as Correction, Instruction in 1652. By 9 August 1651, however, the council of state had considered a petition from him, probably that described by Anthony Wood as 'a petition to Oliver by way of acknowledgement and submission' (Wood, Ath. Oxon., 4.46), and his release was finally secured.

On 1 November 1654 Case was made rector of the London church of St Giles-in-the-Fields but a fuller, albeit temporary, revival of his fortunes came only with the restoration of the presbyterian cause around the time of the demise of the Commonwealth. In March 1660, under Monck's transitional regime, he was appointed by parliament a commissioner for the approbation of ministers. Case was now able to return to the presbyterian royalism he had espoused between 1648 and 1650 and he became an active proponent of a royal restoration. In 1660 he was at Scheveningen, on the Dutch coast, as one of the representatives of the London clergy to attend on Charles II; unfortunately, he fell in the sea, or, as Pepys put it, was 'sadly dipped' (Pepys, 1.140).

In the new circumstances of the 1660s, however, Case faced new humiliation. Pepys, who had been used to hear Case preach in London, recorded how much his earnest style of discourse had dated, rendering him a target for the newly fashionable mockery of the puritan style of preaching: 'a dull fellow in his talk, and all in the presbyterian manner, a great deal of noise and a kind of religious tone, but very dull' (Pepys, 9.190). As a commissioner at the Savoy talks aimed at hammering out a post-Restoration settlement of religion to accommodate the heirs of the puritan tradition, Case believed that his party had more bargaining strength with the restored monarchy than it actually possessed, and when he intruded himself into Charles II's presence and told the king that he 'had a word of advice' (Memoirs of Edmund Ludlow, 2.283) about looking after the presbyterian interest, the monarch sardonically replied that he had no recollection of appointing Case to his council. Perhaps it was the anti-nonconformist drift in the capital in 1661 that induced Case to put out feelers to the northern presbyterian magnate, Lord Wharton, about a move to Lancashire.

None the less, the final stage in Case's career, that of a declared nonconformist, unfolded in London. The previous episcopalian minister at St Giles-in-the-Fields was reinstated after the Restoration and the ejected Case preached his farewell sermon in the parish on 17 August 1662 but he was not silenced. Always a preacher, he was reported in that role in London in 1663, and on 30 April 1672, described as 'Thomas Case, of Chiswick' (Bate, xl) and a presbyterian, he was issued a licence under the declaration of indulgence; in 1676 he was ministering in Holborn. He published the popular Mount Pisgah, or, A Prospect of Heaven (1670).

The last surviving dissenting member of the Westminster assembly, Case died on 30 May 1682, aged eighty-four, leaving £1200 to his wife, relations, and 'poor godly men and women'. He was buried at Christ Church Greyfriars, on 3 June. In his funeral address Thomas Jacomb caught the combination, or contradiction, in Thomas Case between the passionate partisan—'a quick and warm spirit'—and the minister of the word—'a scriptural preacher; a great man in prayer, and one who brought home many souls to God' (Nonconformist's Memorial, 1.154).