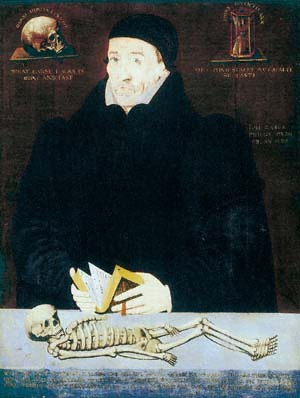 The President and Fellows of St John's College, Oxford

Case, John (1540/41?–1600), philosopher and physician, was born at Woodstock, Oxfordshire. He may have received his grammar-school education in Woodstock, where there was certainly a school before 1571. After spending some time as a chorister at New College and Christ Church, he transferred to St John's College, Oxford, as a scholar in 1564. He completed the requirements for the BA in 1568 and became a fellow of St John's in the same year. By 1572 he had completed the requirements for the MA. Case had apparently been frequenting the house of 'the widow of one [John] Dobson the keeper of Bocardo prison' (Wood, Ath. Oxon., 1.687). A visitation of the college in August 1572 resulted in Case's being ordered to marry the widow or stop seeing her. Case married Elizabeth Dobson (d. 1611/12?) on 30 December 1574 and resigned his fellowship, but continued to teach logic and other subjects in his wife's house.

Wood alleges that Case lost his fellowship because he was 'Popishly affected' and that his students were 'mostly of the R. C. religion' (Wood, Ath. Oxon., 1.685), but there is little evidence to support this. Case is mentioned by two of his former students in the responsa scholarum for admission to the English College at Rome, but not in connection with their conversions or flights from England. During his embassy to France (1579–83) Sir Henry Cobham wrote to Sir Francis Walsingham at least twice to report that Case's house was being used as a refuge for Catholics, but no apparent action was taken against Case. In 1583, when the university tried to eliminate Catholic elements by insisting that tutors should not receive students into their houses, Case was granted an exemption because of his teaching effectiveness and poor health.

In the 1580s and 1590s Case belonged to an intellectual circle that may have included Laurence Humphrey, Thomas Holland, Matthew Gwinne, Griffin Powel, Richard Eedes, and John Lyly, all of whom contributed liminary verses to his publications. Case in turn contributed liminary verses or letters to works by Nicholas Breton, Richard Haydocke, John Rider, William Thorne, and William Gager. He also contributed verses to Oxford University publications commemorating the deaths of Christopher Hatton (1592) and Henry Unton (1596).

Case's first book, Summa veterum interpretum in universam dialecticam Aristotelis (1584), is a textbook in Aristotelian logic. Not only does Case criticize Peter Ramus for being arrogant, but he recommends Duns Scotus and Walter Burleigh. His second book, Speculum moralium quaestionum in universam ethicen Aristotelis (1585), a commentary on Aristotle's Nicomachean Ethics, has the distinction of being the first major publication of the new Oxford University Press. Appended to a second edition, printed in 1596, were Reflexus speculi moralis (a commentary on Aristotle's Magna moralia) and ABCedarium moralis philosophiae. Case's lengthy Sphaera civitatis (1588), a commentary on Aristotle's Politics, discusses such modern-sounding topics as abortion, immigration, capital punishment, inflation, communism, and women in combat. It has been described as 'the most rigorous discussion of political theory and practice to survive from sixteenth-century England' (Binns, 368). His Apologia musices (1588), a treatise on music, has often been confused with The Praise of Musicke (1586), first attributed to Case by Thomas Watson in the 1580s; however, the two books are quite different and Case is probably not the author of the English work.

In a poem that prefaces Sphaera civitatis, William Gager implies that Case was childless, but he did have a stepdaughter, Anne Dobson, who married the Oxford physician Bartholomew Warner in 1583. In 1589, when Case was installed as prebendary of North Alton, Warner stood in for him at the ceremony. Though he may have been attending medical lectures as early as 1564, and seems to have begun practising medicine in 1574, Case did not supplicate for a medical degree until 1588. He completed the requirements for the MD in 1590. He may have served as personal physician to the historian William Camden and the antiquarian Robert Cotton. He was probably the ‘Doctor Case’ summoned from Chester to attend Ferdinando Stanley, earl of Derby, on his deathbed in 1594. Though we cannot confirm that Case was ever in Chester, two certificates of residence indicate that he and his family were mobile at about this time. His treatment of Stanley apparently called for 'one dragme of rubarbe, and half an ounce of manna, in a draught of checkin brothe' (Lodge, 3.47). A student notebook in the British Library (Sloane MS 249) also contains medical recipes ascribed to Case.

Case's works, all written in Latin, were reprinted more often on the continent than in England. So frustrated was the Oxford printer Joseph Barnes by pirated editions that he refused to print Case's works for nearly eight years after Sphaera civitatis. Case's Apologia academiarum (1596), a defence of education, remains unpublished. His next publication after the 1596 reprint of the Speculum moralium quaestionum was Thesaurus oeconomiae (1597), a commentary on the pseudo-Aristotelian Economics, focusing on family and household matters. It has been called 'the most complex analysis of marriage that any early modern English writer produced' (Knapp, 415). His final two works may have been printed posthumously: Lapis philosophicus (undated), a lengthy commentary on Aristotle's Physics, and its companion Ancilla philosophiae (1600). In the former work Case covers many of Aristotle's topics in the Physics, but also takes a stand on such Renaissance controversies as the efficacy of alchemy and the Paracelsian doctrine of the homunculus. Case despised Paracelsus almost as much as Machiavelli, another recurring villain in his works.

According to the inscription on his monument in the chapel of St John's College, Oxford, Case died on 23 January 1600 (by modern reckoning) at the age of nearly sixty. The Catholic biographer John Pits alleged that a Roman Catholic priest was present at Case's death. An inventory of his property, taken shortly after his death and now in the archives of Oxford University, indicates that Case was a man of some wealth. Though principally an author of commentaries on Aristotle's works, Case nevertheless made original contributions to Renaissance political theory and natural philosophy. He should be regarded as an important Elizabethan intellectual who played a key role in the English revival of Aristotelian philosophy at the end of the sixteenth century.