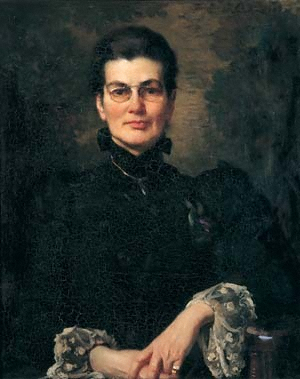 by kind permission of the Principal and Fellows of St Hugh's College, Oxford

Moberly, Charlotte Anne Elizabeth [Annie] (1846–1937), college head, was born on 16 September 1846 at Winchester. She was the tenth child and seventh daughter of George Moberly (1803–1885), headmaster of Winchester College, and his wife, Mary Anne (1812–1890), daughter of Thomas Crokat, a Scottish merchant who traded at Leghorn. This family of eight girls and seven boys, with their awe-inspiring but much admired father and beautiful, Italian-educated mother, spent their childhood at Winchester and, in the summer holidays, in a rented farmhouse at Hursley, Hampshire, John Keble's parish. It was a devout, though liberal, high-Anglican upbringing. Mrs Keble was Annie's godmother. All five boys who survived into adulthood made their careers in the church; the most eminent, Robert Campbell Moberly, became regius professor of pastoral theology at Oxford. But their Hampshire neighbour and friend, the novelist Charlotte M. Yonge, recalled the Moberlys' 'habits of fun, games, and habitual merriment, animation, and playfulness' (Olivier, Victorian Ladies, 27). The May family in Yonge's The Daisy Chain was named after the youngest daughter, her godchild May Moberly.

The girls were educated at home by their mother and a governess, but within the ambience of a big public school. They attended the college chapel and were taught music by its organist. A bookish child, Annie acquired the rudiments of Latin, New Testament Greek, and Hebrew by attending her brothers' lessons and by private study. Until her fortieth year she remained a contented ‘home daughter’. When George Moberly became bishop of Salisbury in 1869 (after a brief period as vicar of Brighstone in the Isle of Wight, following his retirement from Winchester in 1866), she acted as his personal secretary and, in his last years of failing health, his chief nurse-companion. This phase of her life ended with his death in 1885. Annie and two older unmarried sisters now moved with their mother to a dull street in Salisbury and faced a future of genteel poverty. But within the year she was invited by Elizabeth Wordsworth, sister of the new bishop of Salisbury and principal of Lady Margaret Hall, to take charge of a new Anglican hall for women students at Oxford. This was, she felt, a ‘call’ in answer to her prayers—yet she left the family circle for the unfamiliar atmosphere of a university 'most unwillingly' (Moberly to Johnson, 28 Oct [1894], Bertha Johnson MSS).

Annie Moberly was to preside, however, over an embryonic women's college that established itself against considerable odds. Founded by Elizabeth Wordsworth for students who could not afford the fees at Lady Margaret Hall, St Hugh's Hall opened in 1886 with four students in a semi-detached north Oxford house, 25 Norham Road, run by Miss Moberly, on a nominal salary of £40 a year, assisted by two servants. To her chagrin, seven years later Miss Wordsworth proposed that the hall, now with about twenty students and housed in larger premises at 17 Norham Gardens, should be absorbed by Lady Margaret Hall as a hostel. This plan was rejected by the Lady Margaret Hall council, but relations with the hall's founder remained touchy and its finances precarious. Yet by the time of Miss Moberly's retirement in March 1915 St Hugh's College (as it was named from 1911) had over sixty students and its own staff of tutors, and it was on the point of moving to purpose-built premises on the spacious site in St Margaret's Road it occupies today.

Like other women's colleges, St Hugh's throve in a buoyant market for higher education, and many women and university men had a hand in its success. Annie Moberly's part in it was, however, important. A bishop's daughter of impeccable orthodoxy and gentility, she won the confidence of Anglican parents with conservative views on women's education. Even after fees were raised to allow for collegiate development, St Hugh's was particularly attractive to clergy daughters. At the same time, although never an activist herself, Miss Moberly had progressive sympathies on women's questions, including the opening to women of Oxford degrees and women's suffrage. In shaping corporate life at St Hugh's, she drew on memories of her father's regime at Winchester. Students were expected to work hard and develop an esprit de corps. Sport was encouraged, as were sociability and music-making—Miss Moberly played the piano at dances and conducted an intercollegiate women's orchestra as well as St Hugh's instrumental and choral groups. It was she who planned the transition from a domestic hall to a college with appropriate new buildings, and the benefactor who made that possible, the suffragette Clara Evelyn Mordan, was cultivated by her as a personal friend.

Dark, square-set, and with striking eyes and strong features, Annie Moberly inherited from her father a Slavonic appearance that lent support to a cherished family myth that they were descended from an illegitimate son of Peter the Great. Her Sunday evening addresses, delivered in a study furnished with family portraits, books, and furniture from the bishop's palace, were remembered as inspiring. Versions that were later published are Five Visions of the Revelations (1914; 2nd edn, 1939) and The Faith of the Prophets (1916). Students read Dante with her too. They recalled the allure of her deep, distinctive voice. In the words of one admirer, 'she was a very exciting head of a college' (Olivier, Without Knowing, 175). On the other hand, she was by common consent a very poor housekeeper—the food and domestic discomforts at St Hugh's were notorious. Early students remembered her keen sense of humour, but in later years some found her remote, brusque, and arrogant. A naturally shy woman and lacking in professional background, she was never really at ease in Oxford.

Eleanor Jourdain, the Lady Margaret Hall trained headmistress whom she appointed in 1902 as vice-principal, provided much needed support and also, perhaps, the stimulus to develop her literary talents, displayed in two books published in 1911. One was a well-received family memoir, dedicated to her forty-one nephews and nieces—Dulce domum (the title recalled the Winchester College song). Despite its reticence (the product, in part at least, of censorship imposed by the family), this is an intimate, charming account of the world in which she grew up. The other was a collaborative work with Miss Jourdain, An Adventure. Published under the pseudonyms Elizabeth Morison and Frances Lamont, this classic ghost story was based on an experience they had shared at Versailles; it was a best-seller and there have been several later editions (1913, 1924, 1931, 1955, 1988). Visiting the Petit Trianon as sightseers on 10 August 1901, the anniversary of the capture of the Tuileries in the French Revolution, they had seen figures in eighteenth-century dress. Their later researches suggested to them that these were Marie Antoinette and members of her court, and that the landscape and buildings they had seen were also as they had been at that time. They believed that they had travelled back in time, in telepathic rapport with an 'act of memory' emanating from the queen in captivity. Even sceptics (among them Eleanor Sidgwick, who reviewed the book for the Society for Psychical Research) acknowledged that this was a well-written story. Less scientifically minded readers, high-church Oxford academics among them, gave it credence as an account of a brush with the supernatural.

Annie Moberly, it seems, took the lead in publicizing the ‘adventure’. For her this was not the first experience of ‘visions’, and she left records of later experiences of ‘time-travel’, published for the first time in Edith Olivier's sympathetic portrait of her in 1945. A plausible explanation for the Versailles adventure emerged some decades later: the ‘ghosts’ may have been taking part in a rehearsal for one of the fancy-dress parties given at Versailles by Comte Robert de Montesquiou (Evans, An end to An Adventure). But speculation has persisted about the significance for these two women of their preoccupation with this uncanny experience. Did it become the vehicle for a repressed lesbian affinity, as Terry Castle has suggested (Contagious folly: an adventure and its skeptics)? For Miss Moberly, at least, it was more obviously a vehicle for nostalgia. As children the Moberlys devoured historical romances and heard tales of second sight associated with their Scottish maternal ancestors. Their father did not rule out the possibility of ghostly encounters, while making it clear that occultism and spiritualism were heterodox.

Miss Moberly's retirement at the age of sixty-nine appears to have been delayed by fears that she could not afford to rent a house in Oxford. Doubtless Eleanor Jourdain, her successor as principal, shared the costs at 4 Norham Road, where until her death in 1924 she spent vacations with Annie Moberly. They became close friends, though always (in Joan Evans's view) somewhat distanced by differences in age and status and the habits of reserve ingrained by upbringing. In the ‘row’ over the sacking of a tutor that divided the college in 1923–4 Annie Moberly was fiercely loyal to Miss Jourdain. She was herself a member of the college's governing council until her death and became an honorary fellow. She was made an honorary MA in 1920 when Oxford degrees were opened to women. Under the name Elizabeth Morison she published in retirement a series of religious stories for children—Signposts (1–12, 1928)—and Simple Meditations and Intercessions on the Stations of the Cross (1931). She died at her home in Norham Road, at the age of ninety, on 5 May 1937, and was buried three days later in Wolvercote cemetery.

'Annie Moberly's intellect was of the vigorous rather than the critical order', wrote Barbara Gwyer (Oxford Magazine, 1937, 594). This is hard to deny, and it was seen as a reproach by later generations at St Hugh's. But the criticism is misplaced. For the role of academic woman she had neither training nor vocation. Yet her achievement in establishing the college is unquestioned. Both as principal and in her spiritual and imaginative life, she drew on a distinctively Victorian family inheritance.