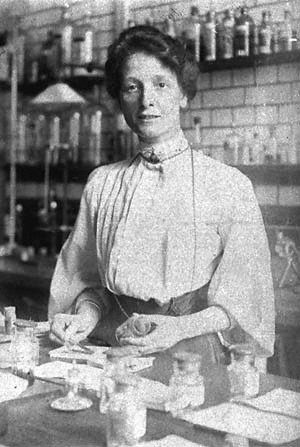 Whiteley, Martha Annie (1866–1956), chemist, was born on 11 November 1866 at 7a Queens Road west, Chelsea, London, the second daughter of William Sedgewick Whiteley, house agent's clerk, and his wife, Hannah (née Bargh). She was educated at Kensington Girls' School, then Royal Holloway College, Egham, gaining a University of London BSc in 1890. She passed the Oxford honours mathematical moderations in 1891, the year in which she became a teacher at Wimbledon high school.

In 1900 Martha Whiteley became science lecturer at St Gabriel's Training College, Camberwell. In 1902 she obtained her London doctorate, for which she had been studying part-time at the Royal College of Science (RCS) since 1898. She was appointed lecturer on the physical chemistry honours course at Royal Holloway College in 1903, but after gaining her associateship of the Royal College of Science was invited to join the staff of the RCS (which from 1907 was part of Imperial College) as a teaching scholar in the chemistry department in 1904; she became an assistant in 1905, demonstrator in 1908, lecturer in 1914, and assistant professor (equivalent of reader) in 1920. Between 1912 and 1916 she held one of five fellowships awarded by the British Federation of University Women. She retired in 1934. During her career, she apparently refused to accept higher positions at Imperial, preferring to continue her chemical research work. (It was the consensus among her colleagues that she was capable of fulfilling duties at full professorial level.) It was typical of her, too, that she would not always allow her name to be added to collaborative published papers.

In her research work Martha Whiteley worked with some of the great names in chemistry, including Sir Jocelyn Field Thorpe. Her doctoral studies had focused on the organic chemistry of barbituric compounds, and she continued working with this class of chemicals until 1914. Then, with the advent of the First World War, she and many other academic chemists became involved in the war effort—work for which she was officially recorded as a volunteer. The college was involved in the synthesis of compounds for drugs and improved methods of producing them. These included hydrochloride and lactate for β‎-eucaine, and diethylaminoethanol for novocaine, which were later put into commercial production. She was also involved in the production of sugars and allied substances. Whiteley developed the lachrymatory gas known as SK (ethyl iodoacetate) and the incendiary mixture DW (Dr Whiteley). For these services she was appointed officer in the Order of the British Empire in 1920. Following the war she made contributions to the second and third editions of Thorpe's Dictionary of Applied Chemistry and co-authored A Student's Manual of Organic Chemical Analysis (1925).

Martha Whiteley also played an important pastoral role in college, particularly towards women. She took an interest in all her students' academic work and in their recreation, instituting the Whiteley cup for squash. In 1913 Sir Alfred Keogh, then rector at Imperial, remarked:

No one who knows her can doubt that she is one of the most remarkable personalities either amongst men or women in the country. She has an extraordinary power of expression which in some way enables her to obtain a very remarkable influence in the College, and a charm of manner particularly desirable in a teacher. … here you have no ordinary woman. I know of no one more likely to inspire women students to great things in science than Miss Whiteley.

There were few women students in the chemistry department at that time, and Whiteley's influence and 'power of engendering enthusiasm amongst the women students' (Whiteley MSS) extended to all college departments.

Martha Whiteley deplored the fact that there were so few women science students, and also so few trained scientific women in the country able to fill positions vacated by men during the First World War. She was a member of the Chemical Society, and in 1904 she signed a petition with eighteen women chemists requesting the admittance of women to fellowship of the society. Although it was rejected, she continued in the battle, which was finally won in 1920, and was the first woman to be elected a member of the council of the Chemical Society, on which she served from 1928 to 1931. In 1918 she had been elected a fellow of the Royal Institute of Chemistry.

On her retirement in 1934 Martha Whiteley was presented with a book in which was an illuminated address and signatures of those staff and students who had known her at the college. In the years that followed she continued her work on the Dictionary of Applied Chemistry at Imperial College, and edited the fourth edition, published in 1941. During the Second World War, when she was bombed out of her London home, she was offered facilities at Cambridge University, and temporarily transferred her work there. Martha Whiteley died of heart failure, shortly before her ninetieth birthday, at her home, Flat 2, 4 Roland Gardens, South Kensington, on 24 May 1956. She had been associated with the RCS and Imperial College for more than fifty years, latterly through her honorary fellowship of Imperial, awarded in 1946, her work with the Imperial College Women's Association, which she founded in 1912, and her continuing friendships with devoted colleagues. Little is known of her private life other than that she was deeply religious; her funeral service was held at St Augustine's Church, Queen's Gate, on 29 May 1956.