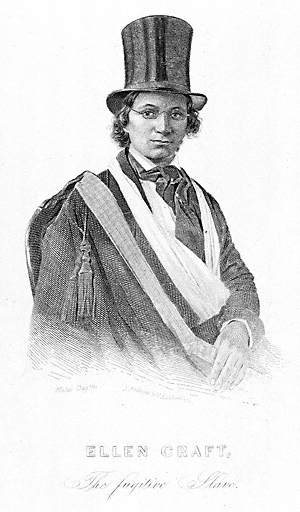 London borough of Hammersmith and Fulham

Craft [née Smith], Ellen (1825/6–1891), slavery abolitionist, was born into slavery in Clinton, Georgia, the daughter of Major James Smith and Maria, one of his slaves. In 1837, aged eleven, she was given to her mistress's daughter, Eliza, on her marriage to Dr Robert Collins of Macon, Georgia. As a favourite servant the conditions of her slavery were mild. In Macon she met William Craft (c. 1825–1900), a slave apprenticed as a carpenter, and they were married about 1847.

Afraid of being separated from one another or having future children taken away to be sold, the Crafts devised a plan in late 1848 to escape to the north. Ellen, who could pass for white, disguised herself as a slave master travelling to Philadelphia for medical treatment while William, who was darker-skinned, acted as her servant. Ellen put her right hand in a sling to avoid having to write her name, and wrapped up her face to reduce the need to converse with strangers during the journey. With Christmas holiday passes from their masters the slave couple escaped without arousing suspicion. William had saved some money, as slave artisans sometimes could, which paid for Ellen's clothes and their fares, first on a train to Savannah and then by boat, train, and coach to Philadelphia. Four days after leaving Macon they were being hidden by a Quaker family outside Philadelphia. Three weeks later they moved on, no longer in disguise, to the safety of Boston.

For the next eighteen months the Crafts lived in Boston safe, they thought, from possible recapture. Ellen worked as a seamstress, William as a cabinet-maker. Befriended by William Wells Brown, an anti-slavery lecturer and himself an escaped slave, they recounted their stories at many anti-slavery meetings, becoming well known among Boston's 2000-strong black community, about 20 per cent of whom were also fugitive slaves. The Fugitive Slave Bill in September 1850 threatened their freedom; within three days of the bill's passage some forty fugitive slaves fled Boston for Canada. In October 1850 two agents of Ellen and William's Georgia masters arrived in Boston intent on seizing them, but through a combination of legal suits and public protests the agents were forced to leave Boston without them.

On 7 November 1850 Ellen and William were ‘officially’ married by Theodore Parker (their earlier ‘slave’ marriage not being legally recognized). Later the same month they left Boston for England, travelling via Maine, Nova Scotia, and New Brunswick, where they caught the steamer for Liverpool. England was the safest, most logical haven; it had harboured fugitive slaves from America for many years. The Crafts toured widely with William Wells Brown in Scotland and the north and west of England, publicizing the slavery issue at public meetings and talks. With help from English abolitionists they studied for several years in the early 1850s at a trade school for rural youth in Ockham, Surrey. Here they learned to read and write, and also taught some manual skills to their fellow pupils.

Ellen and William had five children, all born in England: Charles Estlin Phillips (b. 1852), William, Stephen Brougham Dennoce (known as Brougham), Alice Isabella Ellen (known as Ellen), and Alfred. Both Crafts continued to be involved in the anti-slavery movement. Ellen was adamant that she would not return to live under a regime which endorsed slavery: 'I had much rather starve in England, a free woman, than be a slave for the best man that ever breathed upon the American continent' (Anti-Slavery Advocate, December 1852). After leaving Ockham the Crafts settled in London. From 1857 to 1867 their home was 12 Cambridge Road (afterwards renamed 26 Cambridge Grove), Hammersmith. Running a Thousand Miles for Freedom, the story of their early life and escape written by William Craft, was published in London in 1860 and was an immediate success.

During the 1860s William made two visits to Dahomey (Benin), his aims including that of bringing an end to the slave trade there. Ellen, who remained in England with the children, was active in the British and Foreign Freed-Men's Aid Society, and also raised money for a boys' school in Dahomey which her husband had founded and a girls' school in Sierra Leone. Through the efforts of friends, in November 1865 Ellen's mother, Maria, was brought over to London to join the family.

In August 1869, American slavery now abolished, the family (except for William junior and Brougham, who remained in England to continue their education until 1873) returned on the Siberia to Boston, where they lived for a time before buying a plantation at Woodville, Ways Station, in Bryan county, Georgia. The plantation was run as a co-operative to allow freed slaves to escape contract labour. Ellen died in 1891, in Bryan county, and was buried at her request near a favourite oak tree on the plantation.