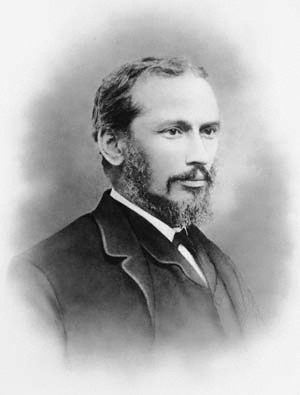 by courtesy of the National Library of Wales

Owen, Daniel (1836–1895), novelist, was born on 20 October 1836 at 53 Long Row, Maes-y-dref, Mold, Flintshire, the youngest of the seven children of Robert Owen (c.1799–1837), miner, and his wife, Sarah, née Edwards (1796–1881), laundress. He was only a few months old when his father and two of his brothers were killed in a pit disaster at Argoed colliery near their home, and his early years were marked by poverty which denied him a consistent formal education, although cultural and spiritual support was provided by the Calvinistic Methodist chapel in New Street, Mold, which the family frequented. In his early teens Owen was taken on as an apprentice tailor by Angel Jones, a deacon of that chapel. In his later years Owen referred to the tailor's workshop as 'a kind of college' where he experienced an intellectual and cultural awakening.

During the 1850s Owen began competing in local eisteddfodau and published poems of moderate value under the nom de plume Glaslwyn. His first venture as a prose writer was a serialized translation of a popular American temperance novel in 1859. Under the influence of his minister and mentor, Roger Edwards, Owen began to preach, and in 1865 he entered Bala Theological College with a view to becoming a minister of religion. His domestic circumstances (he remained unmarried and felt financially responsible for his mother and sister) forced him to leave without completing his course in 1867, and he returned to his craft as a tailor. He then settled into a life of public prominence in Mold in religious, political, and cultural circles, a life which left little room for any advance in his literary development, although he did publish a couple of character sketches in 1870, including his controversial 'Darlun' ('Portrait') of a prominent Calvinistic Methodist minister. His social career was cut short by a serious illness in 1876, but as his closest colleagues saw this as an opportunity to wake his dormant literary talents, this was also the year when his career as a writer began in earnest. Roger Edwards was the editor of his denomination's monthly journal, Y Drysorfa ('The treasury'), and Owen published a series of sermons based on biblical characters in its pages during 1877. Religious hypocrisy and self-delusion were a recurring theme, thus anticipating a major preoccupation of his later work.

Owen's first attempt at fiction appeared in the same publication the following year. Cymeriadau ymhlith ein cynulleidfaoedd ('Characters among our congregations') combined portraiture with a story about the election of deacons. This short work included types that recurred in all his works, including the bombastic religious hypocrite and the plain-speaking Christian of the older generation. The sermons and story were published in a well-received volume, Offrymau neilltuaeth ('The offerings of seclusion'), in 1879. By then Owen's next work, his first novel, was being serialized in Y Drysorfa. Y dreflan ('The town') ran for two years and was published in book form in 1881. Originally intended as a series of twelve sketches, Y dreflan generated a momentum of its own as Owen became increasingly aware that his medium was a powerful vehicle for satirical social commentary. But it was his next novel, Hunangofiant Rhys Lewis, gweinidog Bethel ('The autobiography of Rhys Lewis, minister of Bethel'), which ensured him fame and a small fortune. After its serialization in Y Drysorfa from 1882 to 1884, Owen published the volume at his own expense in 1885 and then sold the copyright to Hughes & Son of Wrexham. The proceeds enabled him to build a new home for himself and his sister Leah. Owen made extensive use of his own life story in Rhys Lewis; he had recently lost his mother and his elder brother, David. The novel's enormous popularity owed much to Owen's superb evocations of life in Victorian Wales, and some of its characters and sayings became assimilated into Welsh popular culture. The narrator's mother and brother, Mari and Bob Lewis, are two of his most famous characters, and the first half of the novel is charged by a series of debates between the conservative evangelical mother and her radical son.

A miscellaneous collection of poems and prose, Y siswrn ('The scissors'), appeared in 1886, by which time Owen had his own business as tailor and outfitter. Profedigaethau Enoc Huws ('The trials of Enoc Huws'), published in 1891, is the novelist's finest achievement, and although it is not without blemish, its status as a major novel in the realist style cannot be denied. Originally conceived as a sequel to Hunangofiant Rhys Lewis, it shows similarities to Y dreflan in terms of satirical social commentary, but Owen displays a greater authorial confidence and arrogance in Profedigaethau Enoc Huws than was evident in the earlier works. The opening chapter, 'Cymru lân' ('Fair Wales'), confronts the tendency in Victorian Wales to present idealized and airbrushed images of Welsh life, and proclaims the author's unwillingness to compromise artistic and moral integrity. The world portrayed in the novel is one where deceit, hypocrisy, and self-delusion, as well as their more innocent and amusing cousins, misunderstanding and speaking at cross-purposes, are endemic. The church and the world alike are riddled with hypocrisy, most memorably incorporated in the person of Captain Richard Trefor, the outwardly respectable and religious mine owner, who uses chapel membership as a means to deceive prospective investors in his mining companies. Despite what some twentieth-century critics would regard as weaknesses in plot and structure, Owen used the realist novel with conviction and imagination in interpreting his life and times and places.

Owen's final novel, Gwen Tomos, merch y Wernddu ('Gwen Tomos, daughter of Wern-ddu'), was written during a period of failing health. Although a popular success, it lacks the vigour and conviction of his earlier work, and the brilliant contemporary observer has settled for being an accomplished storyteller. The strong strain of reminiscence is evident also in the stories which he wrote during his final years. Gwen Tomos was published in 1894, and Straeon y pentan ('Fireside tales') the following year. Despite his indifferent health, Owen participated in local politics during his final years, becoming a member of the Mold local board of health in 1889. He was elected a member of the new urban district council in 1894 and was its first chairman. He died on 22 October 1895 at 23 New Street, Mold, and was buried in Mold two days later. After his death a fund was established to erect a memorial to Wales's foremost novelist, and Goscombe John was commissioned to create the statue which stands by the entrance to the public library in Mold. The esteem with which he has continued to be held was reflected in a number of valuable memorial lectures, published between 1976 and 1984.