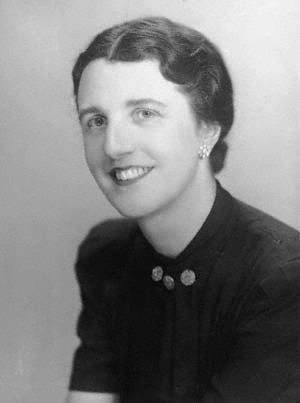 Vaughan [married name Gourlay], Dame Janet Maria (1899–1993), haematologist and radiobiologist, was born on 18 October 1899 at 4 Albert Road, Clifton, Bristol, the eldest of the four children of William Wyamar Vaughan (1865–1938), schoolmaster, and his first wife, Margaret, née Symonds (1869–1925), third daughter of John Addington Symonds (1840–1893), writer and historian. She had two younger brothers, and a younger sister who died in childhood. At the time of her birth her father was an assistant master at Clifton College; he was later headmaster of Giggleswick School (1904–10), master of Wellington College (1910–21), and headmaster of Rugby School (1921–31).

Janet Vaughan was educated at home until she was fifteen, and then at North Foreland Lodge, a school for young ladies. At school she developed an interest in history, politics, current affairs, and questions of poverty and social justice, but not in the foreign languages that she was supposed to learn, causing the headmistress to tell Janet's father that she was 'clearly too stupid to be worth educating' (Vaughan, Jottings). She determined, nevertheless, to become a doctor, in the hope that this would give her a background that would enable her to influence society, and she applied for entry to Somerville College, Oxford. After twice failing she passed the compulsory Oxford entrance examination in Latin, Greek, and arithmetic, and entered Somerville in Michaelmas term 1919 to read medicine, with the full support of her parents. Tutored by J. B. S. Haldane, she was introduced into the Huxley and Haldane families in Oxford and, despite having no previous knowledge of science other than 'a little lady-like botany', she obtained first-class honours in physiology in 1922.

Vaughan completed her clinical studies at University College Hospital (UCH) in 1925 but when, in the same year, her mother died she abandoned her intention to become a physician and trained at UCH as a clinical pathologist, so as to have time to run her father's home at the weekends. Learning of Professor George Minot's work in the USA on the effect of liver in pernicious anaemia, she surreptitiously arranged for liver to be given to a patient, who then made a remarkable recovery, which the treating physician attributed to his prescription of arsenic. Encouraged by Sir Charles Harington, she prepared extracts from minced liver at home and, after trying them herself (because dogs vomited them up), she obtained permission to test them on further patients. The results were uniformly good and provided her with the material for her DM, obtained in 1931.

In 1929 Vaughan's father remarried and she felt able to travel abroad; a Rockefeller fellowship enabled her to work with Minot for a year in Boston. On her return Beit Memorial and Leverhulme fellowships enabled her to conduct research at the London Hospital medical school on the relationship of disorders of haematopoiesis to changes in bone. On 13 September 1930 she married David Gourlay (1889/90–1963), then a civil servant in the Post Office and, later, founder of the Wayfarer's Travel Agency; he was the son of David Gourlay, building contractor, and had been a co-resident in the multiply occupied house in which Vaughan had lived when working at UCH. They had two daughters, Mary (b. 1933) and Priscilla (b. 1935). In 1934 Vaughan was appointed assistant in clinical pathology at the new British Postgraduate Medical School, which put her in charge of the routine haematological and blood transfusion services at the Hammersmith Hospital. In the same year she published her book The Anaemias, which rapidly became the standard text on the subject.

Vaughan's socialist sympathies had been strengthened by the appalling conditions of life that she saw in the London slums during her clinical training and by her subsequent experience of the frequency of nutritional anaemia, and they led her to take an active part in the Committee for Spanish Medical Aid in support of the government forces in the Spanish Civil War. She learned in consequence that stored blood had been successfully used in treating casualties. Blood transfusion was still a primitive process in the UK, requiring fresh blood to be obtained for each patient, and she made preparations for storing blood on a small scale at Hammersmith Hospital. Convinced of the imminence of war after the Munich agreement, she drew up plans, with a few like-minded colleagues, for a national transfusion service. These were accepted by the government; the Medical Research Council (MRC) was made responsible for running the service and Vaughan was put in charge of the north-west London depot for the duration of the war. As the end of the war approached the MRC sent her to Brussels to help to resuscitate liberated but famished British prisoners, and then to Belsen to assess the value of concentrated protein preparations for former prisoners on the verge of dying from starvation—an experience that she described as 'trying to do science in hell' (Vaughan, Jottings).

Vaughan meanwhile had been elected principal of Somerville, which had emerged from the war with increased undergraduate numbers, a reduced teaching strength, run-down buildings, and precarious finances. She brought to the task energy and persistence, and a sense of optimism that was of crucial importance in overcoming the difficulties of the period. She left the college, twenty-two years later, greatly enlarged in numbers and buildings, with sound finances and a commitment to science as well as to the humanities. She was remembered by students as someone who valued them as individuals and was deeply concerned about their personal welfare. Her comment in 1992 on Somerville's decision to admit men is characteristic: 'I think the time had come for it. I am not sorry at all. I think it's very exciting actually' (The Times, 4 Feb 1992, 4).

Despite her college commitments Vaughan found time for active scientific research and external social responsibility. The explosion of nuclear weapons had focused attention on the effects of irradiation from ingested radionuclides, and she headed a small multi-disciplinary group, funded by the MRC, to investigate the biological effects of bone-seeking radioisotopes. The work revealed important differences between the effects of the different radioactive elements, and Vaughan was soon recognized as a world authority on the effects of plutonium. After retirement in 1967 she published The Physiology of Bone (1970), which went to three editions, and The Effects of Radiation on the Skeleton (1973).

Vaughan served on many local and national committees—as founding trustee of the Nuffield Foundation (1943–67); as a member of the royal commission on equal pay (1944–6), of the Phillips Committee on the Economic and Financial Problems of the Provision for Old Age (1953–4), and of two task groups of the International Committee for Radiological Protection (1967 and 1969); and as chairman of the Oxford Regional Hospital Board (1950–51). She was appointed OBE in 1944 and DBE in 1957, elected FRCP in 1939, and FRS in 1979, and awarded honorary degrees by seven universities. She died on 9 January 1993 at the Churchill Hospital, Oxford, of bronchopneumonia. She was survived by her two daughters.

Close
Biographical Memoirs of Fellows of the Royal Society
National Portrait Gallery, London
Wellcome Library for the History and Understanding of Medicine, London
W. Munk, , 2 vols. (1861) 2nd edn, 3 vols. (1878)
(1920–)
Calendars of the grants of probate … made in … HM court of probate [England and Wales]