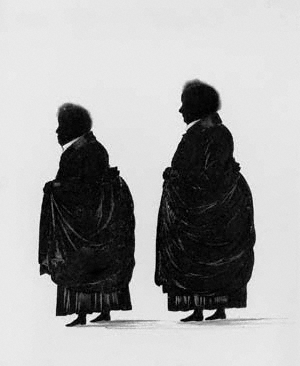 Butler, Lady (Charlotte) Eleanor (1739–1829), elder of the two Ladies of Llangollen, was born at Cambrai, the youngest daughter of Walter Butler of Garryricken (1703–1783) and his wife, Eleanor (d. 1794), daughter of Nicholas Morres of Latargh, co. Tipperary. Her father was the only lineal representative of James Butler, second duke of Ormond, attainted in 1715 for his Jacobite sympathies, and his estates and titles forfeited. The Irish titles were later claimed by Eleanor's brother, John (1740–1795), and were restored in 1791, when he was acknowledged sixteenth earl of Ormond and his sisters granted the rank of earl's daughters.

Like many upper-class Catholics of the time Eleanor Butler was educated abroad. Under the influence of the French Enlightenment, the intellectual climate of the convent of English Benedictines at Cambrai was both liberal and anti-clerical, and gave her not only 'a certain degree of refinement in literature' according to a friend, but 'a distaste for Irish priests and Irish popery' (Mavor, 27). This was to become uncomfortably evident on her return from France to live at the castle of Kilkenny, where her parents were now ensconced in impoverished and priest-ridden grandeur, and where she was to spend upwards of twelve frustrating and unhappy years. Apparently of too 'satirical' and 'masculine' a cast of mind to make the advantageous marriage that might help restore the family fortunes, she seemed doomed to a life of narrow solitude when, in 1769, and aged almost thirty, she met Sarah Ponsonby.

Sarah Ponsonby (1755–1831), second of the Ladies of Llangollen, was the orphaned daughter of Chambre Brabazon Ponsonby, a cousin of the earl of Bessborough, and had newly arrived to attend school in Kilkenny. She met Eleanor Butler soon after, and it was not long before the Butlers had the strange experience of seeing their difficult bluestocking daughter embarking on a friendship with a schoolgirl of thirteen. Over time the relationship became closer, not only on account of their mutual love of the arts and their strong inclination to lead a life of Rousseauesque ‘retirement’, but because both women were, in their separate ways, unhappy.

On leaving school Sarah Ponsonby, shy, bookish, and with little money of her own, had gone to live with distant relations at Woodstock House, near Kilkenny. Here her life was soon plagued by the unwanted attentions of her middle-aged guardian. Meanwhile Eleanor Butler's family, despairing of ever finding her a suitable husband, had, in the interests of economy, determined to send her back to Cambrai. These difficulties drove both women to make secret plans to run away to England and find a cottage where they might live together. Accordingly, on the night of 30 March 1778, disguised as men and armed with pistols, they fled their homes and made for Waterford and the boat for England. Their families caught up with them 2 miles from the port, and they were ignominiously brought back as prisoners. Nothing daunted, Eleanor Butler made a second escape shortly afterwards and joined Sarah at Woodstock. Here, after a lengthy psychological war of attrition, their exasperated relatives at last gave them permission to go away together. Accompanied by Mary Carryll, the devoted Woodstock housemaid, they for a time toured north Wales, finally settling at Plas Newydd, a rented cottage on the outskirts of the village of Llangollen. This, either by luck or good judgement, happened to be one of the main staging posts for travellers between England and Ireland.

They now began to live the ‘retirement’ that would make them famous. It was a life almost conventual in its simplicity, lived according to a strict timetable, regulated by careful, if not always very accurately kept, accounts, concentrating on good works (though in moderation), self-improvement, reading, gardening, and delicious meals. Two years after setting up house together Queen Charlotte, having heard of them from an increasing number of visitors and admirers (though the terms were not always synonymous), was writing for plans of their cottage and garden. The duke of Wellington was to become a treasured friend; Wordsworth, Southey, and Anna Seward, 'Queen Muse of Britain', were to compose poems upon them beneath the cottage roof. Josiah Wedgwood lectured them on rock formations, Erasmus Darwin called on them, and John Lockhart with Sir Walter Scott. Mrs Thrale (now Piozzi) wrote of them admiringly, as did Madame de Genlis in Souvenirs de Félicie, and there were many others.

In time their comparative poverty was relieved by special pensions from George III, while Louis XVI honoured Lady Eleanor, as she had by then become, with the coveted decoration of the Croix St Louis, and Prince Pückler-Muskau would soon dub them 'the most celebrated Virgins in Europe' (N&Q, 4th ser., 4, 1869, 220–21). Yet apart from their aristocratic connections the two women were not, as often supposed, either artists or writers, though Lady Eleanor kept a voluminous journal. Nor, judging from sketches of them and a late double portrait, were they particularly handsome (though their devotees thought otherwise), both ladies being inclined to the embonpoint.

For some, it seems, their fascination lay in the myths of their retirement: that they had both been born on the same day of the same year, that both were orphans, that they later never spent one night away from home—all of which were false—and that they dressed always as men, when in fact they only wore the usual Welsh countrywoman's riding habit and beaver hat. Later down the years and even to modern times they were rumoured to be spies, men dressed as women, suffragettes, or nymphomaniacs. For others their charm lay in the rumoured story of their elopement and the tantalizingly ambiguous nature of their relationship. To yet more the picturesque elegancies and, later, the Gothic extravaganzas of their cottage and its garden proved irresistible. All were convinced, or affected to be, that the two women were perfect living examples of devoted friendship and romantic retirement. They had become icons.

In fact the retirement was not always romantic: it had to survive jealousies, unnerving rows with tradesmen, unpleasant newspaper reports about their private life, disastrous bills, and far too many visitors. Yet it had its highlights, the highest perhaps when they finally managed to purchase their cottage, thus ensuring the continuing safety of their quiet life together. It was a life attached to the seasons, so somewhat repetitive, but a repetition they loved and savoured, finding in it always, as Lady Eleanor regularly insisted, 'Pleasures unknown to Vulgar minds' (Mavor, 157). Lady Eleanor died at Plas Newydd on 2 June 1829, and her friend died there on 9 December two years later. They are buried with their maid, Mary Carryll, beneath a substantial neo-Gothic tombstone in Llangollen churchyard.