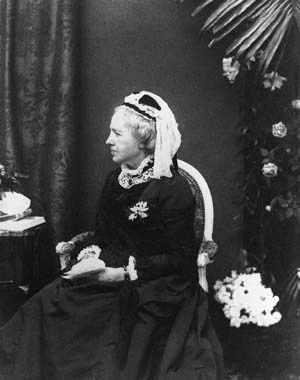 Gladstone [née Glynne], Catherine (1812–1900), philanthropist and wife of William Ewart Gladstone, was born on 6 January 1812 at Hawarden Castle, Flintshire. She was the third child and elder daughter of the four children of Sir Stephen Glynne, eighth baronet (1780–1815), and his wife Mary, née Neville (d. 1854), daughter of the second Baron Braybrooke and his wife, Catherine. Sir Stephen Richard Glynne, ninth baronet (1807–1874), was her brother. Catherine Glynne's father died when she was three and she was reared by her mother, who schooled her well in literature and foreign languages. She was taught the piano by Franz Liszt during her visit to Paris in 1829. From the age of three she was known in the family as Pussy (in later life Aunt Pussy) and had a reputation for flirtatiousness. She had blue eyes and, in her youth, brown hair. Well connected to the Pittite aristocracy (she was related by birth to four prime ministers—William Pitt the elder, Pitt the younger, Sir Richard Grenville, and Lord Grenville), she travelled and made the usual social round. She had many serious suitors (her husband made a list of nine such after their marriage), and was jilted by Colonel Francis Harcourt about 1835. In 1834 Lady Glynne had a stroke and for the rest of her life she suffered bouts of depression, during which she was nursed by Catherine and her younger sister, Mary.

In 1838 Catherine, Stephen, and Mary Glynne travelled to Rome, where they met W. E. Gladstone, who had been at Christ Church, Oxford, with Stephen. Catherine was courted in the moonlight in the Colosseum, at Naples, and by letter; after considerable initial misgivings, she became engaged to Gladstone, then a young tory MP of slightly eccentric reputation, on 8 June 1839. She quickly was married in a double wedding on 25 July 1839, her sister Mary marrying George Lyttelton at the same ceremony. Catherine was quite well prepared by her background for political life, but little prepared for domestic life with Gladstone, whose tempestuous nature and severe sexual temptations in the first thirty years of their marriage required a spouse of unusual character, determination, and forbearance.

Between 1840 and 1854 Catherine Gladstone bore eight children and suffered at least one miscarriage. All her confinements were difficult. One daughter, Jessy, died in 1850, aged five, and her first son, William Henry, died from a brain tumour in 1891. Among her surviving children were Mary Drew, Helen Gladstone, Henry Neville Gladstone, and Herbert John Gladstone. She ran a political household in London, helped to cover for her incompetent brother Stephen's mismanagements at Hawarden, looked after her mother, and was the mainstay of her sister, Mary, who bore fourteen children in sixteen years before dying after childbirth in 1857. Catherine Gladstone played a large part in the Lyttelton household, before and after Mary's death, acting as mother to the younger children, especially to Lucy Cavendish [see under Cavendish (1836–1882)]. In these years she rarely flagged, although she sometimes became ill from overwork, and was seriously thrown off balance by her sister's death.

Between 1852 and 1894 Catherine Gladstone's husband was four times chancellor of the exchequer and four times prime minister. She entertained idiosyncratically, sometimes disconcerting guests at 10 Downing Street with oblique comments and odd costumes. Her reputation for dottiness was probably in part self-encouraged. She was a consistent defender of her husband but made no attempt to assist by acting as a political hostess. She believed her husband and her family were happiest when he was in office and she strongly resisted his various suggestions of retirement. She sometimes acted as his amanuensis and on occasion as political go-between; in the 1890s she had a little success in diminishing the acrimony Queen Victoria felt towards Gladstone. He respected his wife's judgement and confidentiality and always kept her in touch with the details of political developments (when apart, he wrote to her daily, she replying rather less frequently). He relied on her heavily in moments of stress and her quite frequent absences tending sick relatives often coincided with his sexual, and sometimes with his political, crises. She was, on the whole, 'skilful in the management of her husband' (Lee, 213), seeing to his dietary needs and curbing his propensity to overwork. She provided the little bottles of egg-and-sherry drink that he consumed when giving a long speech in the Commons or on the platform, and her estimate of the length of the speech—shown by the number of bottles—became a famous guide to reporters and political opponents.

In public Catherine Gladstone presented herself as the devoted wife: W. L. Watson, for example, observed 'the soft face, high-coloured as a girl's, and tremulous mouth; intent on one thing only in this life—her husband' (Pratt, 41). But in fact she had a good eye for the details of political presentation, waving from windows and from trains when her husband was too tired to do so, and checking that reporters were ready when he was about to speak. She was one of the first political wives regularly to sit by her husband on political platforms and on occasion she spoke at public meetings. The Gladstones presented themselves at extra-parliamentary political occasions as a pair and Catherine Gladstone became something of a political icon, featuring on political plates and memorabilia. In 1887 (aged seventy-five) she became first president of the Women's Liberal Federation, her aim being to 'guide, purify, and stimulate great political movements' (Pratt, 226). Her presidency was regal rather than executive in tone, and she found the details of political business difficult. She was unable to prevent the secession of a group within the federation, led by Rosalind, Lady Carlisle, which found her modest acceptance of women's suffrage excessively timid, and, after the federation split on the question, she resigned from it in October 1892.

As her family commitments eased in the 1860s, Catherine Gladstone involved herself in philanthropy, initially with the House of Charity in Greek Street, Soho, London, then in 1864 founding the Newport Market refuge for vagrants, in Seven Dials, London, to which she later added an industrial school. During the cholera epidemic of 1866 and its aftermath she set up an orphanage and a series of convalescent homes at Snaresbrook and Woodford. For these institutions she was an unembarrassable fund-raiser. Like her husband, she was also much involved in ‘rescuing’ prostitutes; she sometimes sought to restore their sense of self-respect by entertaining them to tea at 10 Downing Street.

This active life took its toll. She, even more than her husband, suffered from insomnia from about 1880 and her memory, always somewhat selective, deteriorated in the 1890s. On her husband's advice she declined the offer of a peerage when he retired as prime minister in 1894. She was the chief mourner at his state funeral in 1898. Catherine Gladstone died from pneumonia at Hawarden Castle on 14 June 1900. She was buried on 17 June next to her husband in their double grave in Westminster Abbey: his will had made this provision a condition of his being buried there.