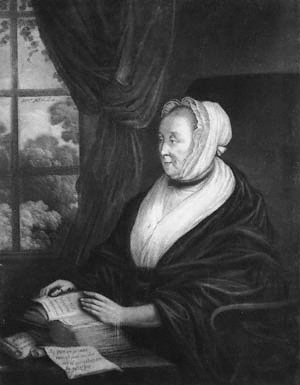 Fletcher [née Bosanquet], Mary (1739–1815), Methodist preacher, was born on 12 September 1739 at Forest House, Leytonstone, Essex, the second of the four children of Samuel Bosanquet (d. 1767), merchant and lord of the manor of Leytonstone, and his wife, whose name is unknown, who also died in 1767. Her family was one of the most illustrious, wealthy, and well-connected Huguenot families in London, closely involved in financial trading in the City, where her younger brother Samuel was a director of the Bank of England and lived in a former residence of the earls of Norwich. Mary later testified that she had been conscious of 'the spirit of God striving with me and offering me salvation' from early childhood and that her confirmation at St Paul's Cathedral at the age of thirteen, following personal instruction in the catechism from her father, was 'a very rousing ordinance to me' (Moore, 13, 20). However, rejecting her family's fashionable lifestyle, she left home in 1760 and embraced Methodism, joining the London Foundery Society, where she experienced a deepening of her spiritual awareness during the revival of 1761–2. In 1763, with the help of a legacy from her grandmother and the support of her close friend Sarah Ryan, she established a Christian community at Leytonstone, providing for needy children and adults, and began to read the scriptures at Methodist class meetings, which were held regularly on Thursday evenings. Between 1763 and 1768 some thirty-four adults, including her co-workers Sarah Crosby and Ann Tripp, and thirty-five children, including Sally Lawrence, a four-year-old orphan, who remained devotedly attached to Mary for the rest of her life, joined the community. Notwithstanding her private means, Mary maintained an exceptionally frugal lifestyle from her youth and was 'always sparing of expense upon herself that she might have more to give “the household of faith”' (ibid., 417). Her portrait reveals a plainly attired, quietly determined, pious woman, with well-defined facial features, wide expressive eyes, an aquiline nose, slightly pursed lips, and hair neatly swept back under a white frilled bonnet, enveloped in a dark hooded cloak.

In June 1768, in order to establish the work on a more secure financial basis, the community moved to Cross Hall, Gildersome, Morley, near Leeds, where Mary faced the considerable challenge of managing an orphanage, school, dairy farm, and maltkilns without the assistance of Sarah Ryan, who died shortly after moving north. Undaunted, however, she initiated, with Sarah Crosby, regular Wednesday evening religious meetings, and the women were soon seeking advice from John Wesley, the founder of Methodism, about their call to preach. While recognizing women's importance to the Methodist movement, Wesley advised them 'never to take a text' nor 'speak in a continued discourse without some break' (Wesley to S. Crosby, 18 March 1769, Burge, Women Preachers, 21). In February 1773, however, Mary, ignoring his advice, made her first explicit reference to a text, explaining later that she felt 'a greater approbation of what we call expounding, taking a part or whole of a chapter and speaking on it' (Burge, Impudent women, 97). Moreover, Wesley was evidently later impressed by her preaching, commenting that: 'her words are as fire, conveying both light and heat to the hearts of all that hear her … her manner is smooth, easy and natural, even when the sense is deep and strong' (Journal, 7.249). The demand for her as a preacher was such that in September 1776 she rode 20 miles across the moors to address 'such a rabble as I scarce ever saw', numbering around 2000, from a rock in Golcar, before conducting a cottage meeting in the village and then preaching from a horse-block to a roadside crowd in Huddersfield.

On 12 November 1781 Mary married at Batley parish church the saintly evangelical vicar of Madeley, John William Fletcher (bap. 1729, d. 1785), who had written to her unexpectedly on his return from a period of convalescence in his native Switzerland, confessing that he had cherished a twenty-five-year regard for her. After the marriage Mary declared: 'I have such a husband as is in everything suited to me' (Moore, 148), while her husband confided: 'God has found me a partner, a sister, a wife who is not afraid to face the colliers and bargemen of my parish' (Burge, Women Preachers, 27). They exercised a remarkably effective joint ministry in the rural industrial parish, which had suffered considerable pastoral neglect during John Fletcher's recent absence. Mary Fletcher conducted regular class meetings and made frequent visits to the sick and infirm, dispensing natural medicines and recording details of her remedies in her commonplace books and in her annotated copy of John Wesley's Primitive Physick. The blissfully happy marriage was curtailed, Mary Fletcher ruefully recorded in her memoirs, after only 'three years, nine months and two days' by 'her heavenly minded' husband's untimely death from a fever on 14 August 1785 (Moore, 178). 'I have trodden deep waters', she recalled, 'but all my afflictions were nothing compared to this', when 'the sun of my earthly joys for ever set' (ibid., 165).

Mary was allowed by her husband's successor to continue to reside in the vicarage after her husband's death and even to advise on the appointment of curates, but, to avoid giving offence, Mary utilized the adjacent tithe barn for her religious meetings. In 1814, aged seventy-five, she was still preaching five times a week. She held her last religious meeting on 24 September 1815 and made her final entry in her journal on 26 October 1815. She had developed a suspected tumour in her left breast, but died on 9 December 1815 from a respiratory illness, which had caused her acute suffering in the last month of her life, when she was cared for by her faithful friend, companion, and executrix, Mary Tooth, who continued her work for almost another three decades after her death. The Fletchers thereby established an evangelical tradition at Madeley which lasted for three generations, and the census of religious worship reveals that the places of worship in Madeley were better attended than those in some neighbouring Shropshire parishes in 1851.

The epitaph on their shared grave in St Michael's churchyard, Madeley, records that during the long period in which Mary survived her husband 'she continued to tread the path in which he left her and ministered with ardent zeal and self denying beneficence to the spiritual and temporal wants of his flock', healing dissensions and preventing schism, endeavouring 'to induce all around her to dwell in unity and Godly love' (Burge, Women Preachers, 31).