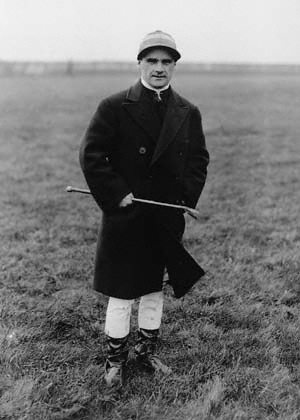 Richards, Sir Gordon (1904–1986), jockey and racehorse trainer, was born on 5 May 1904 in Ivy Row at Donnington Wood, a district of Oakengates, Shropshire, the fourth child and third son of the eight surviving children (four died) of Nathan Richards, coalminer, and his wife, Elizabeth, a former dressmaker, daughter of William Dean, miner and lay preacher. He was given a strict Methodist upbringing, and educated at the infant school at Donnington Wood. In 1917 he became a junior clerk in the warehouse of the Lilleshall engineering works, Oakengates. Finding the work monotonous, he answered a newspaper advertisement for an apprentice to Martin Hartigan, who had the Foxhill stable near Swindon, Wiltshire, and on new year's day 1920 left home for the first time to go to Foxhill.

Short, stocky, and very strong for his weight, Richards had the ideal physique for a jockey. He had dark brown eyes and a thick shock of black hair, which gave him the nickname Moppy. He weighed out at 6 stone 9 pounds for his first mount in public on Clock-Work at Lingfield on 16 October 1920, and rode his first winner on Gay Lord at Leicester on 13 March 1921, but it was not until he had ridden forty-nine winners, and lost his apprentice allowance, in 1923, that his career got under way.

After coming out of his apprenticeship in 1924, Richards was first jockey to Captain Thomas Hogg's stable at Russley Park, Wiltshire, in 1925, and became champion jockey by winning 118 races. By the outset of 1926 his career was put in jeopardy by the diagnosis of a tubercular lung after he had ridden just five more winners, and he spent the rest of the year in a sanatorium. In the 1927 season he regained the championship with 164 winners. The first claim on his services in 1928 was held by the shipping magnate the first Baron Glanely, to whom Captain Hogg had become private trainer at Newmarket. Richards obtained his first classic successes in 1930 by winning the Oaks on Rose of England and the St Leger on Singapore for Lord Glanely, but he narrowly lost the championship. After landing the Manchester November handicap on Lord Glanely's Glorious Devon, on the final day he had ridden one more winner than Freddie Fox, but Fox won the fourth and fifth races to be champion with 129 successes.

Richards was champion again with 141 winners in 1931, during which the Beckhampton trainer Fred Darling offered a substantial sum for first claim on him. With typical loyalty, he first asked Lord Glanely to match the offer, but on Glanely pleading poverty, he became first jockey to the Beckhampton stable. Always immensely popular with the public, Richards was a national hero in 1933, as he bid to break the seasonal record of 246 winners established by Frederick Archer in 1885. After eleven consecutive successes at Chepstow in October, he rode his 247th winner on Golden King at Liverpool on 8 November, and finished the season with 259 winners. In 1934 he rode Easton to be second in the Derby, a race he was yet to win, and in 1936 may have been unlucky not to win it on the Aga Khan's Taj Akbar, who was badly hampered before being runner-up to the Aga Khan's second string Mahmoud. By 1938 his bad luck in the Derby was proverbial. In that year Darling ran both Pasch, on whom Richards had won the Two Thousand Guineas, and the recent French importation Bois Roussel. Richards chose to ride Pasch, and was third to Bois Roussel.

As his tubercular record made him ineligible to serve in the armed forces, Richards continued to ride during the Second World War but, after breaking a leg at Salisbury in May 1941, he missed the remainder of that season and lost the championship for the third time. In 1942 he wore the colours of George VI when winning substitute races for the One Thousand Guineas, Oaks, and St Leger on Sun Chariot. He also won a substitute Two Thousand Guineas for the king on Big Game, and was champion again. In 1943 he surpassed Archer's career total of 2748 winners on Scotch Mist at Windsor, and was champion for the sixteenth time. After winning the Two Thousand Guineas by an extraordinarily easy eight lengths on that great miler Tudor Minstrel in 1947, Richards seemed certain to win the Derby at last. Heavily backed by the public, Tudor Minstrel started hot favourite, but failed to stay the course and finished only fourth. Champion for the twentieth time in 1947, Richards broke his own record of 1933 by riding 269 winners. After the retirement of Fred Darling at the end of that season, the Beckhampton stable continued to hold first claim on him when it was taken over by Noel Murless. The best horse he rode for Murless was the brilliant grey sprinter Abernant, on whom he won the Nunthorpe Stakes at York in 1949 and 1950.

The knighthood that Richards received in the coronation honours in 1953 was as much in recognition of his exemplary integrity as of his professional achievement; he was the first jockey thus honoured. A few days after the queen had conferred it upon him, he won the Derby at his twenty-eighth and final attempt by riding Sir Victor Sassoon's Pinza to beat the queen's colt Aureole. A little over a year later, Richards had to retire from riding after breaking his pelvis and four ribs when he was thrown by Abergeldie in the paddock at Sandown Park on 10 July 1954.

With his body slewed round to the left, so that his weight was unevenly distributed as he rode his powerful finish, Richards had a most unorthodox style. All the same, horses ran as straight as a die for him. From 21,843 mounts, he rode 4870 winners and was champion jockey twenty-six times.

Subsequently Richards trained at Beckhampton, Ogbourne Maisey, and finally Whitsbury, Hampshire. Although his success was not comparable to that which he had enjoyed as a jockey, he won a number of valuable races, notably the Middle Park Stakes with Pipe of Peace, who was to be third in the Derby in 1956, and the Champion stakes with Reform in 1967. Richards also managed the horses of Lady Beaverbrook and Michael Sobell. He closed his stable in 1970. He was elected an honorary member of the Jockey Club in the same year.

On 1 March 1928 Richards married Margery Gladys (d. 1982), daughter of Thomas David Winckle, railway carriage fitter. They had two sons and a daughter. A third son, the daughter's twin, lived only a few hours. Richards died of a heart attack at his home, Duff House, Kintbury, Berkshire, on 10 November 1986.