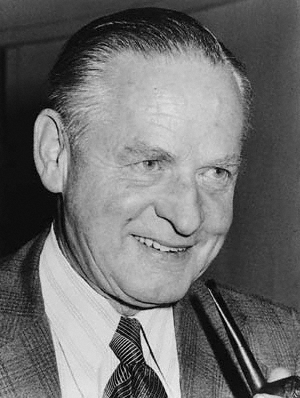 Thrower, Percy John (1913–1988), broadcaster and writer on gardening, was born on 30 January 1913 in Little Horwood, Buckinghamshire, the second child and second son in the family of three sons and two daughters of Harry Thrower and his wife, Beatrice Dunnett. Just before Percy's birth his father had been appointed head gardener at Horwood House, near Winslow, where a new garden was to be made on an old site. An intelligent child but not a bookish one, Percy grew up with the new garden, becoming attuned to the daily rituals of garden nurture. With his ambition—'to be a head gardener, like my father'—already named, he was withdrawn from Little Horwood Church of England school shortly after his fourteenth birthday, in order to join his father's staff as pot-and-crock boy.

In 1931 Thrower was offered a job as an improver in the royal gardens at Windsor. There he met and courted his future wife, Constance, daughter of Charles Cook, the head gardener of Windsor. In 1935 he moved to Leeds to sample municipal gardening as a journeyman, taking with him a sense of hierarchy and an adherence to the frugal and disciplined methods of Windsor. From 1937 he was able to put some of these into practice at Derby, as deputy parks superintendent; the job included maintaining the country's first public arboretum. Opened in 1840 that now mature amenity was, a century on, unregarded by the citizens, whose preferences, if any, inclined towards the formal bedding schemes that were the staple of municipal gardening. Thrower found a role in that style for fuchsias, whose seemingly exotic but generally very tolerant qualities he was to help popularize. In the summer of 1939 the focus of his work shifted to organizing the local 'dig for victory' effort, and he spent the next five years instructing often motley groups of non-gardeners in the cultivation of roots and basic brassicas, supporting the wartime aim of self-sufficiency in food. Thus he discovered his distinguishing gift—as a natural teacher. On 9 September 1939, he married Constance Cook. They subsequently had three daughters.

From 1946 until his retirement in 1974 Thrower was parks superintendent at Shrewsbury. His responsibilities included helping to revive the annual flower show after the war and maintaining its place near the top of the gardener's calendar. From its resumption in 1947 the show was covered by the BBC, which was keen to develop its treatment of all leisure interests. In the course of co-operating with BBC producers it became apparent that Thrower had the qualities of a natural broadcaster. The corporation's principal gardening voice—C. H. Middleton, 'the best-known gardener since Adam'—had died prematurely in 1945 and an unofficial vacancy existed. Thrower's services were soon much in demand.

Most remarkably on the radio, and later on television, Thrower believed in letting his material speak for itself. Without a script, and with scarcely any comment or elaboration, he would describe a plant and its capabilities, its strengths and foibles, likes and dislikes, and how to draw out its best. The same technique was later brought to larger themes: how to discover the genius of a site, however small, by observation and experiment; how to create a microclimate by the judicious planting of trees and shrubs; how to reconcile the desire for immediate effect with long-term aims.

No attempt was made to change Thrower's not particularly appealing south-midland accent, nor to soften a mode of utterance reminiscent of a mild-mannered sergeant-major. The tone of voice could be heard too in his journalism, principally for the Daily Mail and Amateur Gardening, and in the sixteen books, among them the often reprinted In your Garden Week by Week (1959), commissioned as his reputation grew. When he proceeded from wireless to television it was not a surprise to behold a rather formal, somewhat top-heavy figure, who might put aside his pipe and often his jacket to demonstrate some arduous task, but seldom his tie. The image thus innocently created was that of the nation's head gardener.

Through simple education and encouragement Thrower helped to restore gardening as Britain's favourite leisure activity, bringing it back as a source of often productive pleasure after the unduly protracted season of the war and the allotment. As one who had known a little too much hands-and-knees drudgery during his early years in the garden, Thrower became a fervent advocate of all labour-saving machines and gadgets. His unrestrained use of chemicals and fungicides tended to isolate him from the new generation of gardeners who rose to prominence as his own career drew to a close. This was the indirect cause of the BBC's decision in 1976 to end his thirteen years as principal presenter of their leading garden programme, Gardeners' World. But Thrower had already started a new television career describing gardening on children's programmes, particularly Blue Peter, and with that audience he was soon an even bigger cult figure than he had been with adults. His last broadcast was made a week before his death from his hospital bed in Wolverhampton, where he was being treated for Hodgkin's disease and where he died on 18 March 1988. His home latterly was The Magnolias, Merrington, Bomere Heath, Shropshire.

Recognition from his peers had come for Thrower when the Royal Horticultural Society made him an associate of honour in 1963. He took particular pleasure from the society's Victoria medal of honour, awarded in 1974. He was appointed MBE in 1984.