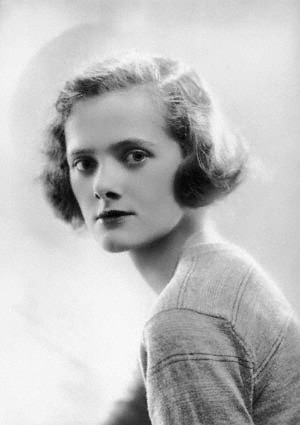 Du Maurier [married name Browning], Dame Daphne (1907–1989), novelist, was born on 13 May 1907 at 24 Cumberland Terrace, Regent's Park, London, the second of three daughters (there were no sons) of Sir Gerald Hubert Edward Busson Du Maurier (1873–1934), actor–manager, and his wife, Muriel (1881–1957), actress, daughter of Harry Beaumont, solicitor. She was educated mainly at home by governesses (of whom one, Maud Waddell, was highly influential) and afterwards spent three terms at a finishing school near Paris. She began writing stories and poetry in her childhood and was encouraged by her father, with whom she had a very close relationship. He longed for her to emulate her grandfather, George Du Maurier, artist and author of three novels, including the best-selling Trilby (1894). But the circumstances of her upbringing, with its constant emphasis on pleasure and distraction, called for self-discipline of a kind she did not manage to exert until she was twenty-two, when she finally completed several short stories. The first published story was 'And now to God the Father', which appeared in The Bystander (May 1929), a magazine edited by her uncle. It was a cynical view of society as she saw it. Her ambition then was to write a novel, and she settled down to do so in the winter of 1929–30 at Bodinnick by Fowey in Cornwall, where her parents had bought Ferryside to be their country home. Here she wrote The Loving Spirit, the story of four generations of a Cornish family, which was published to considerable acclaim by Heinemann in February 1931. She immediately wrote second and third novels which confounded expectations by differing radically from her first, but it was her fourth book, Gerald, a frank biography of her father, written when he died in 1934, which made the greatest impact. It was published by Victor Gollancz, with whom she then began a long and fruitful partnership. Gollancz recognized that her strengths lay in narrative drive and the evocation of atmosphere. He encouraged her to develop these and the result was Jamaica Inn (1936), an instant best-seller. At this point in her career she was obliged, as an army wife, to go abroad, to Egypt, with her husband, Major Frederick Arthur Montague (Boy) Browning (1896–1965), the son of Frederick Henry Browning. Boy Browning ran various businesses and also worked for MI5, and had a distinguished army career as well. They had married in 1932 and in 1933 had a daughter, Tessa, who later married, as her second husband, the son of the first Viscount Montgomery of Alamein.

This was a deeply unhappy period in Daphne Du Maurier's life—she was an untypical army wife, being very antisocial, and she loathed Egypt and was profoundly homesick—but it produced Rebecca (1938). This was meant to be a psychological study of jealousy and was based on her own feelings of jealousy towards a former fiancée of her husband's, Jan Ricardo, but it was hailed as a romantic novel in the tradition of Jane Eyre. She was astonished by the success of Rebecca—hardback copies in Britain alone passed the million mark in 1992—and mystified by the readers' interpretation of the novel. In 1941 she produced Frenchman's Creek and in 1943 Hungry Hill.

In 1943, while her husband was away fighting in the war, Daphne Du Maurier went to live in Cornwall with her three children, Tessa, her other daughter, Flavia (b. 1937), and her son, Christian (b. 1940). She took on the lease of Menabilly, near Par, a house (owned by the Rashleigh family) with which she had become obsessed. The war years affected her marriage deeply and adversely. She felt estranged from her husband, in spite of her love for him, and wrote a play, The Years Between (performed in 1944), about how war affected marriages. After the war her husband became comptroller of the household and treasurer to Princess Elizabeth, which meant that he lived in London while she stayed in Cornwall, with only weekends shared. This led to tensions which heavily influenced her work. Outwardly charming, witty, and light-hearted, she was struggling inwardly with feelings of rejection and uncertainty about her personal life. In The Apple Tree (1952) and The Breaking Point (1959), two collections of short stories of great biographical significance, she expressed the extent of her confusion and frustration. Her career flourished, though not precisely in the way she wished. My Cousin Rachel appeared in 1951. Her novels translated well into films and Jamaica Inn (1939), Rebecca (1940), Frenchman's Creek (1944), and Hungry Hill (1946) were notable successes. Her short story The Birds became famous in the hands of Alfred Hitchcock in 1963. (Hitchcock had also directed Laurence Olivier and Joan Fontaine in Rebecca.) Rebecca had made her a popular, worldwide, best-selling author, but she felt her later, more serious, work was not given its due. In The Scapegoat (1957) she was writing at a deeper level, but the novel was treated as a romantic thriller. She turned to biography, partly in an attempt to show she could do serious work, though it was also true that she had temporarily lost the creative urge to write fiction. The Infernal World of Branwell Brontë (1960) gave her great satisfaction and was well researched, but it did little to alter her image.

In 1965 Daphne Du Maurier's husband died. Her grief, together with the distress caused by her fear that her imagination was deserting her, made her depressed. The news that she could not renew her lease on Menabilly again added to her misery but in 1969, the year in which she was made a DBE, she moved to Kilmarth in Par, Menabilly's dower house, where she wrote The House on the Strand (1969), which restored her confidence. Her last novel, Rule Britannia (1972), destroyed it again; she was unable to write any more fiction afterwards. In 1977 she wrote a slim volume of autobiography (Growing Pains), which she regretted producing. In 1981 she had a nervous breakdown and then a mild coronary. The last eight years of her life were spent mourning her lost talent, without which she felt her days were empty and meaningless.

Daphne Du Maurier was in her youth an extremely beautiful woman, of medium height, fine-boned and slender, with thick blonde hair and arresting eyes of a startlingly bright, clear blue. She was a very complex person, well aware, through constant self-analysis, that she acted out her life to an extraordinary degree. Her novels were her fantasies and seemed more real to her than her actual life. She needed them, to give expression to what she called, through her fascination with Jungian theory, her ‘no. 2’ self. This was a darker, violent self which she suppressed in a most determined manner. Part of this suppression was sexual: she believed she should have been born a boy and that she had to keep this masculine side of herself hidden, which she did, except while writing, for most of her life. The problem of her life she herself defined as 'a fear of reality'. Only when she was alone, and especially alone at Menabilly, was she able to still this fear. Her work has been consistently underrated, in spite of critical acknowledgement that Rebecca and The Scapegoat, at least, are of literary worth. Her influence on the growth of ‘women's writing’ as a separate division, and on writing for the cinema (eight of her novels and stories were made into successful films), was significant in the 1930s and 1940s, but it is as a popular novelist that her position remains secure, especially among the young. She died of heart failure at her home in Par, Cornwall, on 19 April 1989. She was cremated and her ashes were scattered at Kilmarth.