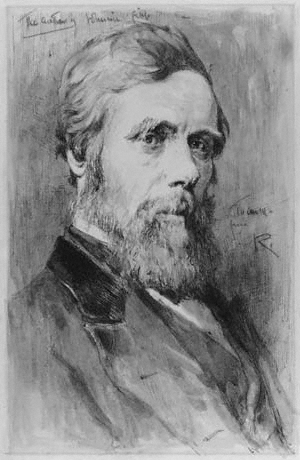 Alexander, William (1826–1894), novelist and journalist, was born on 12 June 1826 at the farm of Westerhouses, Rescivet, in the parish of Chapel of Garioch, Aberdeenshire. He was the eldest son of the ten children of James Alexander (1789–1856), blacksmith and tenant farmer, and his wife, Anne Wilson of Old Rayne (1802–1889). He received the normal course of instruction for a country boy at the parish school of Daviot, but the real education of this deeply cerebral man began within the pioneering educational self-help movement then spreading throughout the north-east of Scotland.

Alexander's enthusiastic beginnings in the family farming tradition ended abruptly when, at about the age of twenty, he lost a leg in an accident. During the long recuperation period he taught himself shorthand and became active in the Aberdeenshire and Banffshire Mutual Instruction Union. This won him the friendship and support of William McCombie of Cairnballoch, political economist and moral philosopher, and one of the most impressive autodidacts in Scotland in a generation which included Robert Chambers and Hugh Miller. McCombie gave Alexander a thorough grounding in 'the leading philosophical tendencies of the age' and a job on his newspaper, a struggling radical weekly called the Aberdeen Free Press. Alexander was the main support of his late father's young family, and he was forty-one when he married Anne Allan, a schoolteacher, at Oldmachar, Aberdeen, on 22 May 1867. They had no children.

McCombie was largely an absentee editor, so that Alexander effectively ran the Free Press for many years before he officially succeeded to the editorial chair in 1870. He was one of the pioneering generation of professional journalists that created the Scottish popular press after the repeal of the Stamp Act in 1855. A lifetime of reporting politics at city and parliamentary level nourished his fascination with power. He was effective in gaining access for the press to the centres of decision making, and was intimately familiar with every aspect of newspaper work, from agriculture—in which he was an authority in his own right—to fine art. His shorthand was renowned, and he was famous for his ability to reproduce people vividly and economically on the page. His professional achievements were recognized when he was made vice-president of the Institute of Journalists. Alexander was active in liberal politics in the north-east of Scotland and also in the civic life of the city of Aberdeen. He was a council member of the New Spalding Club and the Aberdeen Philosophical Society, and was active in many projects for the benefit of the city. In 1887 he was awarded an honorary LLD by the University of Aberdeen.

As a writer, Alexander's most famous work is the novel Johnny Gibb of Gushetneuk, begun as a serial in the Free Press on 28 September 1869. It was published in book form in 1871 and went through more than twenty editions thereafter, seldom being out of print. The novel long enjoyed a merely regional reputation because of the radical demotic Scots in which it is written, as, for example, in the famous opening apostrophe:

It later came to be regarded as a classic of nineteenth-century Scottish fiction. A masterly study of power and its ramifications at every social level, the work deals with the struggle to control the land and the impact of the great disruption of 1843, the most dramatic event of nineteenth-century Scottish history. It centres on the eponymous hero, Johnny Gibb, tenant farmer of Gushetneuk in Aberdeenshire, a man conceived in epic Courbet-like proportions, who leads the successful revolt of the small farmers against established authority in politics and religion. The novel takes a revolutionary view of the centrality and significance of the common man, and offers a radical solution to the crisis in land ownership, being influenced by John Stuart Mill as well as by contemporary French socialist thinking.

It was not Alexander's intention that Johnny Gibb should appear in book form at all; it was deliberately addressed to a plebeian audience, the high-quality Scottish common readers among whom he himself had grown up, and it was only at the insistence of friends that it was launched into the heavily Anglicized middle-class book market. Because the market for books within the United Kingdom was at that time dominated by England, Scottish novelists, from Scott to Barrie and beyond, had to accommodate themselves to this fact, and present a view of Scotland and Scottish life that fitted English prejudices and expectations. Some of Alexander's other writings were also published in book form—his short-story collection Life amongst my Ain Folk (1875) and the brilliant social history Notes and Sketches Illustrative of Northern Rural Life (1877).

Most of Alexander's work, including a further five novels, remained until the mid-1980s in the obscurity of the newspaper columns in which it had originally been published, so that his full range and power only then began to be appreciated. The ‘lost’ novels (two of which, The Laird of Drammochdyle and My Uncle the Baillie, were published in book form in 1986 and 1995 respectively) deal powerfully with city as well as country life, with the plight of the urban poor as well as with farmers and cotters; they draw upon a complex of advanced social, economic, and scientific theory, and taken together form an ambitious imaginative sequence covering more than a century of social and economic change.

Alexander's work demonstrates the presence of a sophisticated literary realism in a tradition previously dismissed as having dwindled into kailyard sentimentality. It was central to the re-evaluation of nineteenth-century Scottish literature that took place in the last decades of the twentieth century. Alexander died of pneumonia at his home, 3 Belvidere Street, Aberdeen, on 19 February 1894 and was buried on 24 February in the city's Nellfield cemetery.