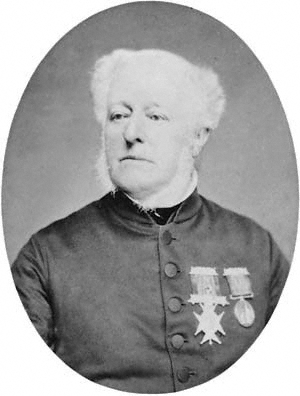 Brookes, William Penny (1809–1895), surgeon apothecary and campaigner for the revival of the Olympic games, was born on 13 August 1809 at 4 Wilmore Street, Much Wenlock, Shropshire, the first of the five children of William Brookes (1776–1830), doctor, and his wife, Mary Doughty (1786–1869). After five years apprenticed to his father, in 1829 Brookes studied at the united hospitals of Guy's and St Thomas's, London; it is also known that he went to Paris in 1830 and then on to Padua to further his studies. Brookes returned to Wenlock in 1831 to take up his late father's practice; he qualified LSA and MRCS in 1831, and was elected FRCS in 1870. His practice covered a wide rural area of several communities and it is said that he often rode some 70 miles a day to visit his patients.

Brookes was a short, stocky man, his passport stating his height to be 5 feet 2 inches. Nevertheless what he lacked in inches his character made up for in organizational ability, perseverance, energy, and vision. A polymath, Brookes was fluent in French, Greek, and Latin, and was a nationally respected botanist. His many and varied interests, in particular the provision of physical education, were all pursued with relentless enthusiasm. On 18 May 1835 he married Jane Clare Talbot (1811–1885) of Tettenhall, Staffordshire, daughter of Thomas Faulkner Talbot and his wife, Jane. At Brookes's death, of his two sons and three daughters only Adeline (1839–1925) survived him; a son, William Brookes (b. 1845), a brilliant medical student at Oxford, accidentally drowned there in December 1868.

Appointed a justice of the peace and, in 1841, commissioner of roads and taxes, Brookes took an active role in civic life. He was responsible for the refurbishment, in 1849, of the council chamber in Wenlock's beautiful sixteenth-century guildhall, he instigated the building of the corn exchange in the town's high street in 1852, and, ever in touch with progress, he was largely instrumental in bringing gas lighting to the town in 1856 and also the railway, which was officially opened in 1862.

In 1841 Brookes set up the Wenlock Agricultural Reading Society (WARS), an early kind of lending library for working men, which was later accommodated in the reading rooms above the corn exchange. From this society various sections evolved; in particular a class (later called the Olympian Society: WOS) was set up in 1850 to hold annual games 'for literary and fine-art attainments, and for skill and strength in athletic exercise' ( W. P. Brookes archives, WOS/1 (1850–76), 135). The games were open to those whom Brookes termed 'every grade of man'. Initially the sports were a mixture of athletic events, old country sports, and a special event to amuse the spectators. On occasion athletes and spectators numbered several thousand, and building on this success Brookes founded the Shropshire Olympian games (1861) and was instrumental in the formation of the National Olympian Association (1865), both of which were hosted by different towns with the host town financing the games. This was a significant new concept; at that time numerous athletic associations were springing up all over the country and the aim of the National Olympian Association was to lay down regulations and to bring some organization to sports associations under one nationally recognized body. Their first games were held at Crystal Palace in 1866 and attracted over 10,000 spectators. The reaction of the ‘amateur’ sportsmen (principally from the public schools and the universities of Oxford and Cambridge) was swiftly to set up the Amateur Athletic Club (later Association). Anyone could take part in the AAC games but membership of the club was by invitation only. Brookes kept meticulous records relating to the Olympian societies and his other causes, which can now be found in the archives of Wenlock Olympian Society.

Although Brookes had a lifelong admiration for Greece and for the Greek ideal of physical fitness there is no evidence that he ever visited that country. His first known contact with Greece was when he sent a prize of £10 to the Zappas Olympic games in Athens in 1859. From this time he intermittently petitioned the Greek government to re-establish Olympic-styled games. The Greek newspaper The Clio reported, in June 1881, that 'Dr Brookes, this enthusiastic Philhelline is endeavouring to organise an International Olympic Festival, to be held in Athens' ( Coubertin collection). Political unrest prevented this; nevertheless Brookes continued a lively correspondence with the Greek chargé d'affaires in London, I. Gennadius.

Brookes's persistent campaign for physical education to be made compulsory in schools brought him into contact with Baron Coubertin, who was researching foreign provision of physical education on behalf of the French government. Following Coubertin's visit to the Wenlock Olympian games in 1890 the two men began a correspondence which lasted until Brookes's death. The young aristocrat referred to the octogenarian Brookes as 'my oldest friend' and, greatly impressed by his lifelong campaign for a revived Olympics with international participation, initially acknowledged Brookes, in the December 1890 edition of La Revue Athletique, as the pioneer of modern Olympics: 'If the Olympic Games that Modern Greece has not yet been able to revive still survives today, it is due, not to a Greek, but to Dr W. P. Brookes' ( W. P. Brookes archives, WOS/2 (1877–95), 221). The congress of the Sorbonne was instigated by Coubertin, in 1894, to establish an Olympic revival; Brookes, listed as an honorary member, was unable to attend, through ill health, and died on 10 December 1895 at his home, 4 Wilmore Street, Much Wenlock, four months before the realization of his dream, the first modern Olympics held in Athens, in April 1896. He was buried at the parish church of Much Wenlock on 13 December.

Close
Calendars of the grants of probate … made in … HM court of probate [England and Wales]
Shropshire Records and Research Centre, Shrewsbury