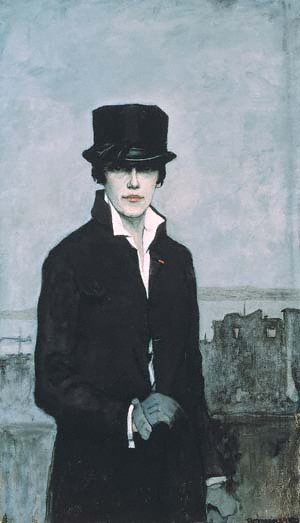 Brooks [née Goddard], (Beatrice) Romaine Mary (1874–1970), painter and lesbian icon, was born in a hotel in Rome on 1 May 1874, the third of three children of Major Harry Goddard, army officer, and his wife, Ella Waterman (d. 1902), who were both American citizens. Her father was reputed to be an alcoholic, and her parents divorced not long after her birth. Her mother was very rich, having a number of residences in various European countries. Despite this she seems to have spent little time or money on her two daughters, reserving most of her affection for her sickly and unstable son, St Mar; according to Romaine's later account, her mother was extremely cruel both mentally and physically (see Secrest, 15–23). Her education seems to have been haphazard, including a girls' school in New Jersey, a convent in Italy, and a finishing school in Geneva. By 1893 she was asserting her independence, first studying singing in Paris, where one of her fellow students was the noted contralto Clara Butt. She also met Alexander Hamilton Phillips, St Mar's doctor, with whom she may have had an affair, and possibly even gave birth to a daughter, but this is extremely uncertain. By 1895 she had extracted a small financial settlement from her mother, and in 1896 went to Rome to study art at the Circolo Artistico and the Scuola Nazionale, where she was the only woman student. She had been drawing and painting since childhood, and from this time she was able to devote most of her time to painting.

In Italy, Romaine Goddard made the acquaintance of a number of expatriates, most of them British. Capri in particular at this time was a haven for wealthy British homosexual men, particularly artists and writers, who were avoiding Britain in the wake of Oscar Wilde's trial, and here from 1899 onward she met such writers as Somerset Maugham and E. F. Benson, as well as John Ellingham Brooks (d. 1929), with whom she struck up a friendship. In 1901 her brother died and her mother summoned her to Nice. There Mrs Goddard died of diabetes in 1902, leaving a considerable fortune to Romaine. This marked a major change in her life; for example it is at about this time that she began wearing masculine clothing. She married Brooks on Capri on 13 June 1903, thereby incidentally acquiring British citizenship; the marriage seems to have lasted effectively only about a year before Romaine broke off relations with her husband. In September 1904 she went to London, buying a studio in Tite Street, and shortly thereafter took a small studio at St Ives. There she worked on developing what would henceforth be her characteristic austere style, especially her range of greys, blacks, and whites, without apparently any contact with other artists in the town. About this time she also became friendly with Lord Alfred Douglas. In 1905 she moved to Paris, where she soon became involved with the circle around her fellow American the princesse de Polignac, née Winnaretta Singer. However, it was not until 1910 that she mounted her first major exhibition at the Galeries Durand-Ruel in Paris, which immediately established her reputation. Gabriele D'Annunzio (with whom she may have had an affair) described her as 'the most profound and wise orchestrator of greys in modern painting' (Secrest, 419), and the critic Robert de Montesquiou called her 'cambrioleur d'âmes' (thief of souls), referring to the perceptiveness of her portraits (Chadwick, 86). In fact, she did not restrict herself to portraits, also painting a number of female nudes of a stylized androgynous type. A favourite model was Ida Rubinstein, sketches for whose portrait she used as the basis of her picture La France croisée (1914; Smithsonian Institution, Washington). For this and for the service her art had rendered to France, she was awarded the medal of the Légion d'honneur in 1920.

In 1915 Brooks met another American, the writer and salon hostess Natalie Clifford Barney (1877–1972), who became her partner until 1968. They spent much of the First World War in Paris, although in 1916 Romaine Brooks returned to Italy. She was back in France by the end of the war. About 1921 they made the acquaintance of Radclyffe Hall and Una Troubridge, and Romaine Brooks appeared thinly disguised as Venetia Ford in Hall's novel The Forge. Despite her displeasure at this, in 1924 Romaine Brooks painted a portrait of Una Troubridge (Smithsonian Institution, Washington, DC), taking a studio in London for the purpose. The finished portrait was regarded as something of a caricature, and did nothing to improve relationships between the two lesbian couples.

Brooks and Barney collaborated on a novel, The One who is Legion, or, A. D.'s After-Life, which was privately printed in London in 1930 with illustrations by Brooks. In 1927 they took two villas in Beauvallon in the south of France which they linked together with a shared dining-room; the resultant house they named Villa Trait d'Union (Hyphen Villa). J. E. Brooks had died in May 1929, and in the mid-1930s Romaine Brooks set about re-establishing her American citizenship. In 1935 she returned to the United States, but was back in Europe by 1939, spending most of the war in or near Florence. After 1945 she rented an apartment in Nice and divided her time between it and the Villa Gaia (Gay Villa) at Fiesole, near Florence. Her relationship with Natalie Barney grew increasingly fraught over the years, and in 1968 she finally broke off relations on the grounds of her infidelity. Romaine Brooks died at her home, 11 rue des Ponchettes, Nice, on 7 December 1970.

Romaine Brooks' reputation as a painter suffered a sharp decline in the years after the Second World War, but it recovered after her death, especially because of her rediscovery by the lesbian movement in the 1970s. Her reputation as an artist is complemented by the non-heterosexual appeal of her female nudes, by her inclination for a masculine style of dress apparent in her self-portrait (1923; Smithsonian Institution, Washington, DC), and by her position within the well-to-do homosexual circles of France and Britain in the early twentieth century.