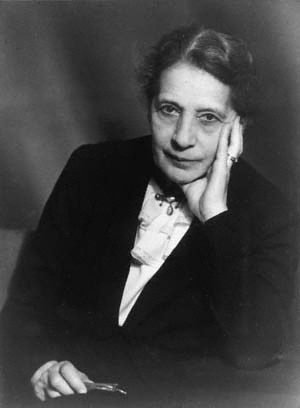 Meitner, Lise (1878–1968), physicist, was born on 7 November 1878 at 27 Kaiser Josefstrasse, Vienna, the third of the eight children of Philipp Meitner (d. 1910), a lawyer, and his wife, Hedwig Skovran (1850–1924). Both parents were of Jewish descent, yet Meitner accepted baptism as a protestant in 1908. As a woman scientist, Lise Meitner had to struggle to launch a career. She trained as a French teacher yet, crucially, her family backed her decision to pursue a higher education when in 1897 women were granted access to the philosophical faculties of Austrian universities. After training privately to take the required examination she entered the University of Vienna in 1901. She studied physics and mathematics with the renowned Ludwig Boltzmann, and in 1906 took her PhD under Franz Exner, on heat conduction in inhomogeneous solids. She then turned to the new field of radioactivity, to which she was to devote her scientific work.

The study of radioactivity thrived in Vienna yet chances to get a position were slim. In 1907, with her family's continued financial support, Meitner moved to Berlin. She attended Max Planck's lectures at the university and met an assistant at Emil Fischer's chemistry institute, Otto Hahn, an early advocate of radioactivity in Germany. In the years leading to the First World War Meitner collaborated with Hahn on the identification and separation of new radioactive substances, and entered the German academic system: in 1912, at thirty-five, she obtained her first paid position, as Planck's assistant, and that same year she moved with Hahn to the radioactive section of the new Kaiser Wilhelm Institut für Chemie, one in a series of research centres funded by German industrialists. In 1913 she became an associate at the institute, and in 1917, after a year serving as an X-ray nurse–technician with the Austrian army, she was appointed director of its physics section. During the war she managed to complete, with Hahn's occasional assistance when on leave, the search for the precursor of actinium—protactinium (Pa, element 91). Meitner secured the necessary pitchblende residues from the chemical firm Buchler's industrial laboratory in Brunswick, where part of the treatment was also carried out.

Meitner built her prestige as a physicist during the Weimar years (1918–33)—her best both professionally and personally. In 1922 she received the venia legendi, which qualified her for teaching at the university, and in 1926 she was appointed extraordinary professor. The human and material resources of her laboratory at the Kaiser Wilhelm Institut grew steadily after temporary setbacks during the 1922–3 inflation, making it, together with Hahn's chemical section, Germany's most important radioactive research centre.

During this period Meitner studied the relationship between beta and gamma rays, with important implications for nuclear structure. In the context of a long-standing controversy with C. D. Ellis, from the Cavendish Laboratory in Cambridge, she established in 1925 that gamma-ray emission followed, rather than triggered, radioactive transformations, though she later confirmed Ellis and W. A. Wooster's result that the primary beta-spectrum was continuous. Beginning in 1929, a substantial mesothorium (228Ra) and radiothorium (228Th) loan from the Kaiser Wilhelm Gesellschaft allowed her and her co-workers to study the absorption of high-energy gamma rays in matter—a topic of relevance for the physics of the nucleus and cosmic rays. In these experiments Meitner used the newly developed Geiger-Müller counter; as with the cloud chamber before, she was quick in adapting new instruments. By virtue of its technical expertise and its stock of radioactive sources Meitner's section also played a substantial role in the study of the new particles of the early 1930s, the neutron and the positron.

As an Austrian citizen and non-state employee, Meitner was spared the Nazis' first racial laws (introduced in 1933). She considered leaving Germany at the time, yet the excellent work conditions at the institute prevailed. The removal of her venia legendi and increasing isolation may have conditioned her resuming collaborative work with Hahn. For four years, with a younger researcher, Fritz Strassmann, they studied the radioactive elements formed in the bombardment of uranium nuclei by neutrons, some of which were presumed to be heavier than uranium itself (to have an atomic number over 92).

In July 1938, three months after the annexation of Austria by the Reich, Meitner fled Germany. From her exile in Sweden she learned firsthand of Hahn and Strassmann's result that barium (an element about half the atomic weight of uranium) was among the products of the collision of a neutron with an uranium nucleus. This seemed very implausible physically. Her nephew, the physicist Otto Robert Frisch, was visiting; over Christmas they arrived at an explanation in terms of the excessive electric charge of the nucleus, and estimated the energy released in the process, for which Frisch proposed the term ‘fission’.

Meitner spent twenty years in Sweden, becoming a Swedish citizen in 1949. During the war she tried to pursue fission research at Magne Siegbahn's research institute in Stockholm. Her situation improved in 1947, when together with Sigvard Ecklund she was assigned the creation of a nuclear physics section at the Swedish Royal Institute of Technology. She retired in 1954, was elected a fellow of the Royal Society of London the following year, and in 1960 moved to Cambridge, where Frisch lived. She died at Cambridge on 27 October 1968 and was buried at Bramley in Hampshire.

Meitner's share in the discovery of fission continues to dominate judgements of her stature as a scientist. In 1945 Hahn alone was controversially awarded the 1944 chemistry Nobel prize for this discovery. Recent work has made clear that Meitner contributed decisively to the discovery, that the Nobel committee's decision was characteristically open to question, and that Hahn did not do much to clarify Meitner's role. The historiographical dominance of this issue has unfortunately prevented many from arriving at a balanced view of Meitner's achievements as a physicist, particularly with regard to her prominent role in the development of radioactivity and the rise of nuclear physics in Germany.