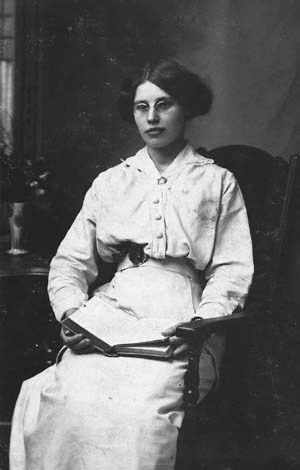 Thompson [née Timms], Flora Jane (1876–1947), author, was born in Juniper Hill, a hamlet in north-east Oxfordshire, on 5 December 1876, the eldest survivor of the ten children of Albert Timms (1854–1918), a stonemason, and his wife, Emma, née Dibber or Dipper (1853–1933), a nursemaid. Her favourite brother, Edwin, died in the battle of the Somme in 1916. After elementary education at the village school in Cottisford she became, at the age of fourteen, an unofficial Post Office counter clerk in the Oxfordshire village of Fringford. In 1898 she went to work at the post office in Grayshott, Hampshire, where she served some of the literary figures who lived in the area, including George Bernard Shaw, Arthur Conan Doyle, Grant Allen, and Richard Le Gallienne. Overawed by the talents of her literary customers, she almost gave up her own attempts at writing at that time.

On 7 January 1903 Flora Timms married John William Thompson (1874–1948), a Post Office clerk and telegraphist from the Isle of Wight. They moved to Bournemouth, where two of their three children were born. In 1911 Flora Thompson won a magazine essay competition and went on to write short stories and newspaper articles. The family moved to Liphook, in Hampshire, in 1916, and from there Flora contributed two long series of articles for the Catholic Fireside magazine; these were nature articles and literary essays written in alternate fortnights. She was a dedicated, self-taught naturalist; her nature articles subsequently appeared in Margaret Lane's A Country Calendar (1979) and in Julian Shuckburgh's The Peverel Papers (1986). The literary articles were the result of her private study of literature; she made extensive use of the recently established free library system to supplement her elementary school education. Her first published book was a volume of poems, Bog Myrtle and Peat (1921). From 1925 until the outbreak of the Second World War, she ran a postal writers' circle called the Peverel Society.

In 1938 Flora Thompson sent a collection of essays on her country childhood to Oxford University Press. They were first published as Lark Rise (1939), Over to Candleford (1941), and Candleford Green (1943), and subsequently as a trilogy under the title Lark Rise to Candleford (1945). The books are the lightly disguised story of Flora Thompson's youth, evoking the life of a hamlet, a village, and a country town in the England of the 1880s. Some historians have cast doubt on their validity as primary sources for the social history of the period, but they have been widely used for that purpose. Few works better or more elegantly capture the decay of Victorian agrarian England. Two musical plays based on the books, Lark Rise and Candleford, by Keith Dewhurst, were performed at the National Theatre, London, in 1978 and 1979. Heatherley, the story of Flora Thompson's time in the post office at Grayshott, was not published in her lifetime; it is included in Lane's A Country Calendar. Her last book, Still Glides the Stream, was published posthumously in 1948.

Flora Thompson's younger son was lost at sea in the Second World War, when the merchant navy ship on which he was serving was torpedoed in mid-Atlantic. She never recovered from his loss, and died on 21 May 1947 at her home, Lauriston, New Road, Brixham, Devon. She was buried in Longcross cemetery, Dartmouth. Her husband survived her.