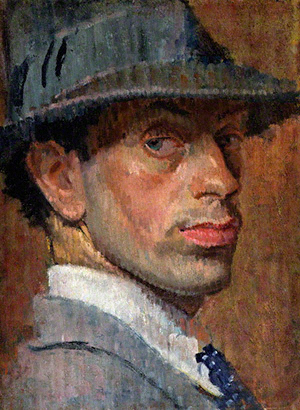 Rosenberg, Isaac (1890–1918), artist and poet, was born at 5 Victoria Square, The Temple, Bristol, on 25 November 1890, the second child and second son in the family of four sons and two daughters of Barnett (formerly Dovber) Rosenberg (b. 1859/60), a Lithuanian who had emigrated from Moscow to avoid conscription into the Russian army and settled in Bristol, working as a pedlar, and his wife, Hacha, daughter of an innkeeper called Davidov of Drinsk in Lithuania. The family moved to London in 1897, and Rosenberg was educated at the Baker Street board school in Stepney, where his natural gift for both drawing and writing so impressed the headmaster that he allowed him to spend most of his time on them. Out of school, he read poetry and drew with chalks on the pavements of the East End.

In 1904 Rosenberg was apprenticed to the firm of Carl Hentschel, engravers, in Fleet Street. His parents hoped that this might prove a stepping-stone to a painter's career, but Rosenberg hated the work, deriving consolation only from his reading of such poets as Byron, Keats, Shelley, and, most importantly, William Blake; from his own writing; and from evening painting classes at the art school of Birkbeck College. At last, his apprenticeship completed, he was free and, in 1911, three generous Jewish women undertook to pay his tuition fees at the Slade School of Fine Art. There he came to know the painters Mark Gertler, D. G. Bomberg, W. P. Roberts, C. R. W. Nevinson, and Stanley Spencer, but continued to write poems, ten of which were privately printed as a pamphlet, Night and Day, in 1912. 'Art is not a plaything,' he wrote, 'it is blood and tears, it must grow up with one; and I believe I have begun too late' (Collected Works, xxii). Even so, he was a capable draughtsman and painted some impressive landscapes, portraits, and allegorical scenes, a few of which were exhibited at the Whitechapel Gallery's exhibition of twentieth-century art in 1914.

Rosenberg had hoped to earn a living from his portraits, but that year he learned that his lungs were weak and was advised to seek a warmer climate. Having a married sister in Cape Town, he sailed for South Africa in 1914, where he painted some pictures, gave a series of lectures on modern art, and published a few articles and poems.

In 1915 Rosenberg returned to England, where he published a second small pamphlet of poems, Youth, and enlisted in the army. Hating the idea of killing, he had hoped to serve with the medical corps but instead was assigned to the Bantam battalion, being, as he said, 'too short for any other' (Collected Works, 219). The antisemitism that he there encountered made him more conscious of the Jewishness that had not been particularly important to him before. He wrote a play, Moses, published in a pamphlet of that title shortly before he crossed the channel with the King's Own Royal Lancaster regiment in June 1916, and a poem, 'The Jew', following his arrival in France.

Rosenberg's poems from the front show him to have absorbed the great tradition of English pastoral poetry, but his tone is different: more impersonal, informal, ironic, and lacking the indignation characteristic of the work of Wilfred Owen and Siegfried Sassoon. In such poems as 'Break of Day in the Trenches', 'Returning we Hear the Larks', and his masterpiece, 'Dead Man's Dump', Rosenberg succeeded in his intention of writing 'Simple poetry—that is where an interesting complexity of thought is kept in tone and right value to the dominating idea so that it is understandable and still ungraspable' (Collected Works, 238).

Rosenberg was killed on the western front near Fampoux, north-east of Arras, on 1 April 1918 and buried in an unmarked grave. His remains were discovered eight years later and reinterred under a headstone in the Bailleul Road east cemetery in Flanders. Examples of Rosenberg's paintings are in the Carlisle Museum and Art Gallery, Tate Modern, and the National Portrait Gallery, London.