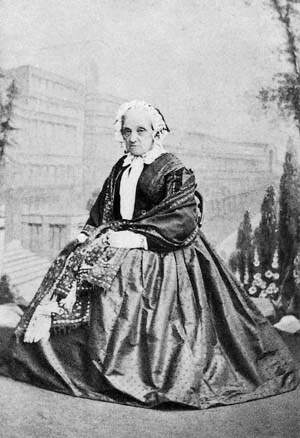 Reid [née Sturch], Elizabeth Jesser (1789–1866), slavery abolitionist and founder of Bedford College, London, was born on 25 December 1789 in St Clement Danes, London, the second of two daughters of William Sturch (1753–1838), a wealthy Unitarian ironmonger, and his wife, Elisabeth, née Jesser (1759/1760–1841). On 11 January 1821 Elizabeth Sturch the daughter married John Reid (1776–1822), physician, from a nonconformist family in Leicester; he died thirteen months later, on 2 July 1822. Mrs Reid used her independent income to practise warm-hearted benevolence and was soon well known for her ardent altruism, supporting, for example, a scheme of Harriet Martineau to enable poor people in the Lake District to buy their own houses. She befriended many American abolitionists, including, during the General Anti-Slavery Convention in London in 1840, American women delegates, such as Lucretia Mott, who were denied the floor of the convention. In 1853 Mrs Reid gave hospitality to Harriet Beecher Stowe, who had come to England to speak about slavery at private gatherings of women, and in 1860 she shared her home with Sarah Parker Remond, the first black woman to undertake a public lecture tour in Britain on the slavery question, who later studied at Bedford College.

Elizabeth Reid, together with her friends Anna Jameson, Julia Smith (aunt of Florence Nightingale and Barbara Leigh Smith Bodichon), and Harriet Martineau, form ‘the missing link’ in the history of the self-emancipation of Englishwomen between Mary Wollstonecraft and the Langham Place circle of the late 1850s. A college for women had been Mrs Reid's dream from childhood, and in 1849 she put up the money to found Bedford College, London, hoping for hundreds of applications but in fact receiving at first only a few dozen, including those of her own friends. The college was founded as a radical, even visionary institution, being intended to widen women's culture and thus their whole lives, rather than merely provide vocational training for future governesses. Unlike its contemporary, Queen's College, Bedford later became part of the University of London, and among its first outstanding students were Barbara Bodichon and George Eliot.

One of the college's most innovatory features was the composition of its governing body, which, at Mrs Reid's insistence, included three Lady Visitors—the first time that any British institution had women sharing officially in its direction. Mrs Reid's religion was the love of humanity and she found it hard that the first women's college should win so very little understanding or support at its outset, especially from men. Even her lifelong friend, Henry Crabb Robinson, thought she carried 'radicalism to a romantic excess' and had 'bigoted opinions about female education', but Julia Smith said of her: 'Her failures are better than other people's successes' (Smith to Robinson, 20 June 1844; Tuke, 17). She played a vital, pioneering role in opening higher education to British women. She died on 30 March 1866 at her home, 21 York Terrace, Regent's Park, London. She had no children.