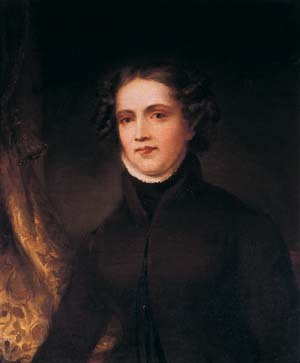 Lister, Anne (1791–1840), diarist and traveller, was born on 3 April 1791, at New Bank, Halifax, Yorkshire, in a house known as St Helen’s. She was the daughter of Captain Jeremy Lister (d. 1836) and his wife, Rebecca Battle (d. 1817), of North Cave, Yorkshire. Her father, youngest son of the Lister family of Shibden Hall, Halifax, one of the chief landowning families of the area, was of a restless disposition and spent his youth in the army. Anne was never very attached to him and wished him more gentlemanly. Two of her brothers died very young; John, the younger of the two surviving boys, died in 1810, and Samuel, the elder (whom Anne loved), died in 1813, leaving Anne one sister, Marian, of whom she was not fond. She was educated at private schools in Ripon and York where, at the age of fifteen, she began her diaries which were partly encoded in a cipher which became more complex with time and which she used to record all private matters, particularly financial and sexual. At school she had her first lesbian experiences with a schoolfriend Eliza Raine who calls Anne her 'husband' in writings which use Anne's code.

In 1815, to escape her parental home where she was unhappy, Lister moved to Shibden Hall to live with her uncle James and aunt Anne, unmarried siblings. She was fiercely independent in running the estate and conducting her own affairs. She dressed in a masculine style: being much concerned with her appearance, she decided early that she would wear only black. She was intelligent and, helped by the scholarly Reverend Samuel Knight, later vicar of Halifax, taught herself Latin, Greek, algebra, geometry, and other subjects in which she read widely. She also enjoyed music and played the flute. She took an active interest in local schools and was the first woman to be elected to the Halifax Literary and Philosophical Society. She was keenly interested in all details of estate business which she directed personally even when abroad, not least because lack of money was a constant embarrassment to her. She developed a hotel and sold and leased land for building, coal mines, and stone quarries, using and indeed exceeding her income on ambitious alterations to the hall (carried out with the help of the architect John Harper), on landscaping the park, and on travelling. She was an old-fashioned tory and Anglican, disdaining tradesmen, set against dissent, and using her power over tenants and her limited means unsuccessfully to fight the radicalism sweeping the area. Her lesbianism caused her no mental anguish since she explicitly stated it to be a pure form of love, and she was very largely protected from gossip by her discretion and dominant social position. Mariana Belcombe, whom Lister referred to as Mary, was her lover from 1814, and the affair continued after Mariana's marriage in 1816 to Charles Lawton. After some other relationships, Lister took as a lover Ann Walker (1803–1854) of Lightcliffe, near Halifax—a shy malleable girl whom Lister pursued, at least partly, for her wealth, and who lived at Shibden Hall with Lister from 1834.

In 1826, on the death of her uncle, Lister became sole executor of his will and owner of the Shibden estate. When in 1836 her aunt and father—who had drawn some of the income of the estate—died, Lister became completely financially independent. Her increasing wealth gave her scope for travel. Her first journeys, in the 1820s and 1830s, took her to Europe. She spent three years in Paris, where she lived with her aunt and studied anatomy under Baron Georges Cuvier. Medical matters had always interested her and are an important part of her diaries; she now combined interest with practical experiment. She went on to Switzerland, the Netherlands, Denmark, Germany, Italy, and Spain. There she visited not only sights of historical and cultural interest, but also factories, prisons, orphanages, farms, and mines and climbed high mountains, making the first recorded ascent of Vignemarle (10,821 feet) in the Pyrenees.

In 1839, with her partner Miss Walker, Lister travelled through Belgium, Germany, Sweden, Finland, Russia, the Caucasus, and Persia. Her adventures ranged from galloping across the frozen Volga to visiting a Tartar harem. She reached the Black Sea but became ill with what is variously described as a fever, the plague, and poisoning from an insect bite. She was carried back to Kutaisi, the capital of West Georgia, where she died on 22 September 1840. Her remains and her diaries were brought back to England by Miss Walker and her remains interred in Halifax parish church. Lister bequeathed Miss Walker a lifetime interest in Shibden Hall, from which she was forcibly removed after becoming insane. After Miss Walker's death the house and estate passed to Anne Lister's Welsh male cousins, notably John Lister (1845–1933), an important local benefactor and the first national treasurer of the Independent Labour Party.

Anne Lister was remembered in her locality long after her death and was the model for Maud in Rosa Kettle's The Mistress of Langdale Hall (1872). She later became known through her diaries which, in twenty-seven volumes and 4 million words (about one sixth in cipher), chronicle in minute detail her daily life at Shibden, her travels, and her personal life. Her cousin John was the first to bring them to public view, choosing extracts of local social and economic interest for the Halifax Guardian (1887–92). He did not publish any of the secret parts, although he had deciphered them. Later authors were also reluctant to publish the coded sections, explained away by one as 'sentimental exchanges with her friends, excruciatingly tedious to the modern mind' (Ramsden, 4). Since the 1980s, however, the diaries have been fully accessible to scholars, and they and about 900 surviving letters have attracted very considerable interest, not least from women's historians because of the commanding position which Lister occupied in her locality and because of her lesbianism. While her diaries and letters are a testimony to her private life, Lister's alterations to Shibden Hall (now a folk museum) and park remain a lasting memorial to her public figure.