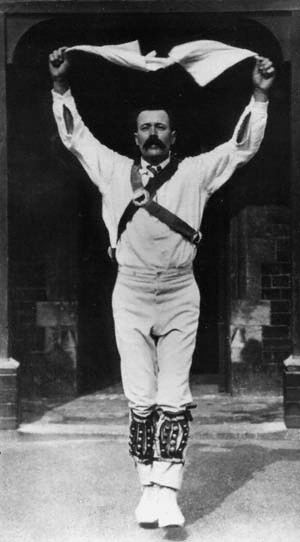 Kimber, William (1872–1961), morris dancer and musician, was born on 8 September 1872 at Huggett's Cottage, Old Road, Headington Quarry, Oxford, eldest of the four sons and two daughters of William Kimber (1849–1931), builder, and his wife, Sophia Ann (1850–1931), née Kimber, smocker, of The Manor, Horspath, Oxfordshire. His father had been a member of the Headington Quarry morris dancers until the team became inactive shortly after the jubilee fête in Oxford in 1887; this was also when Kimber had first danced. About the same time Kimber, who had left school in 1882 to work as a bird-scarer, was apprenticed to the building trade.

Kimber might have remained simply a builder had it not been for two events. The first was that the antiquary Percy Manning persuaded the Headington Quarry team to re-form for a display in Oxford in March 1899. Kimber was not a member of that team, but it continued to perform thereafter, sometimes with him. One performance was at Sandfield Cottage, Headington. Kimber had done building work there at Easter, and had mentioned the morris to Mrs Birch, the owner, promising that the team would call. On seeing the dancing, Mrs Birch enjoined them to visit whenever they danced. That winter, Kimber and his fellows were laid off work because of the poor weather, and decided to dance, unseasonally, to earn money. On Boxing day 1899, they danced at Sandfield Cottage, where Mrs Birch's son-in-law, Cecil Sharp, saw them. Intrigued, he asked Kimber, who was playing concertina (learned by ear from his father) for the dancers, to return the next day. Sharp noted down five tunes from Kimber, who was amazed to hear Sharp play them back to him immediately. This key moment marked the start of Sharp's folk-music collecting, but Kimber was not affected until Mary Neal asked Sharp in 1905 about folk-dances for her Espérance Girls' Club. He gave her Kimber's address; she sought him out and brought him to London to teach the dances. A public performance by the girls in April 1906 initiated a great wave of enthusiasm for morris dancing. Sharp, together with Espérance's musical director Herbert MacIlwaine, published the first collection of dances in 1907, and began lecturing on the subject, using Kimber as demonstrator. As Neal unearthed more former dancers, disputes about authenticity and authority arose. Neal found other dancers from Headington Quarry, and claimed Kimber was inaccurate. In a tense meeting in Headington in 1910, Sharp interrogated Kimber's father and other old dancers to satisfy himself on the authenticity of Kimber's dancing. In all the disputes Kimber promised to 'stick to [Sharp] like a leech'. In later years he always insisted that no matter what he might say, do, or play, if it contradicted Sharp's books then Sharp was right and he wrong. The two relied on each other; as Kimber put it, Sharp could not dance and Kimber could not lecture. While most morris-dancing informants were old men, Kimber was in his athletic prime, 'like a Greek statue … his grace and movements are absolutely classic' (Musical Times, March 1911). His dancing for Sharp often resulted in his losing his job, but he always found fresh employment. After Sharp's death in 1924 Kimber said that he had never failed Sharp, not only at demonstrations, but also in collecting, where he often accompanied Sharp and helped him to reconstruct dances described by former dancers.

Kimber used his skills to train several morris teams around Oxford, including the Oxford police in 1923. He also introduced generations of Headington Quarry children to morris dancing at the local school. He started fresh teams in Headington Quarry itself in 1911–14, again in 1921 (lasting until the mid-1930s), and in 1948 (which side had had an unbroken existence more than half a century later). Kimber's son Fred was a member of the two last; Kimber had married Florence (1869–1917), daughter of Thomas Henry Cripps, railway labourer, in 1894, with whom he had two sons and six daughters. She died in 1917, and on 5 June 1920 he married Bessie Clark (b. 1882/3), widow, daughter of William Joseph Kethro, stonemason of Oxford, thereby acquiring a stepdaughter. In his later years he lived in the house he had built, Merryville (from his nickname, Merry), in St Anne's Road, Headington. Though arthritis took its toll—his last dance was at the Royal Albert Hall in 1930—he continued to play the concertina for dancing until his death, using the instrument given to him after a performance before the Worshipful Company of Musicians in 1909. His style of playing was ideal for dancing: bright, brisk, with full chords where necessary for emphasis in the dance. After he stopped dancing, his playing became increasingly fast, sometimes to the frustration of his dancers. Most of the extant recordings were made in this period, and do not show him at his peak.

William Kimber died on 26 December 1961 at his Headington home, exactly sixty-two years after his encounter with Sharp, collapsing from heart failure on going outside to fetch coal. He was buried on 30 December at Headington Quarry parish church, his coffin borne by six of his morris dancers in full regalia. Because of his early and enduring relationship with Sharp, dances from Headington Quarry formed the backbone of morris teaching for half a century, and the fact that so many performed, or enjoyed watching, morris dances throughout the twentieth century was in no small measure due to him.