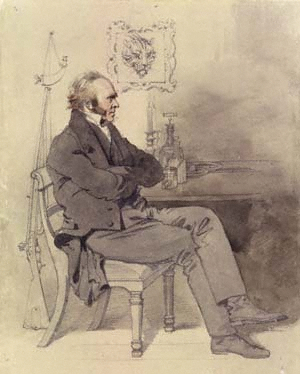 Dunlop, William [pseud. a Backwoodsman] (1792–1848), surgeon and pioneer in Canada, was born in Greenock, Renfrewshire, on 19 November 1792, the youngest of the three sons of Alexander Dunlop (1766–1840), banker, of Keppoch House, Dunbartonshire, and his wife, Janet Graham (1769–1795). The temperance pioneer John Dunlop was his elder brother, and the lawyer and politician Alexander Colquhoun-Stirling-Murray-Dunlop was a half-brother by his father's second marriage. He was educated in Greenock and from 1806 studied medicine at Glasgow University and then in London. He always styled himself MD, but appears not to have taken his degree. He passed his army medical examinations in 1812, and the following year was appointed assistant surgeon to the 89th regiment of foot, with whom he served in Upper Canada in the Anglo-American War. He enjoyed the war but not army life in peacetime, and retired on half pay in 1817 to go to Calcutta, where he edited a tory newspaper in opposition to James Silk Buckingham's Calcutta Journal; later he went to the Bay of Bengal, where unsuccessful efforts to rid an island of tigers to turn it into a resort left him with the nickname Tiger. In 1820 he returned to Scotland to recover from fever, and contributed a series of sketches about India to Blackwood's Edinburgh Magazine. After turning his hand to lecturing on medical jurisprudence in Edinburgh, he went in 1824 to London to edit the British Press, and founded The Telescope, which survived for a year.

In 1826 Dunlop was taken on by the Canada Company as warden of the woods and forests, to inspect the company's lands and to monitor settlement. He performed this task with considerable enjoyment, roaming round the countryside, devising often impractical and grandiose schemes for the company's advancement, attracting notice to himself, stirring up controversy in the press, and getting himself appointed commissioner of the peace. In 1832 he published a book under the pseudonym a Backwoodsman. Masquerading as Statistical Sketches of Upper Canada, this alleged guide for immigrants was in fact a collection of jolly anecdotes and aphorisms. While he could play the fool in print, he was also astute and able, as witnessed in his successful defence of the Canada Company before the house of assembly in 1835.

In the disturbances of 1837 Dunlop enjoyed himself raising a militia (The Bloody Useless), but after equipping it from the company's stores, he fell out with its directors and resigned in 1838. The company and he had suited each other in the pioneering phase of settlement, but as it became more conventional, Dunlop proved too exuberant and idiosyncratic. He was elected for Huron to the house of assembly in the interest of the anti-company Colbornites in 1841 and 1844. He proved a moderate tory, whose speeches were 'frequently more notable for their humour than their grasp of the issues' (DCB, 262). In 1846 he became superintendent of the Lachine Canal. The following year the Literary Garland of Montreal published his humorous and colourful 'Recollections of the American War', which has come to be seen as his best work, although it attracted little attention at the time. He died, unmarried, on 29 June 1848 at Côté St Paul, near Montreal, where he lived, and was buried first in Hamilton and later in Goderich, Upper Canada, which he had helped to lay out in his Canada Company days.

The success of Dunlop's writings depended on his conscious cultivation of himself as comic hero, and this also left a legacy of tales and legends of his feats, adventures, and practical jokes which long outlived him, and formed an important part of the backwoodsman myth.