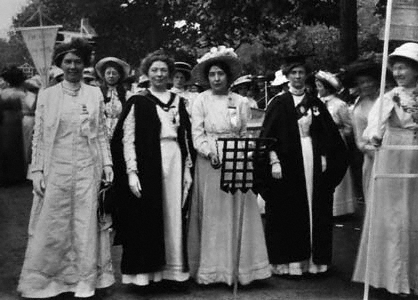 Davison, Emily Wilding (1872–1913), suffragette, was born on 11 October 1872 at Roxburgh House, Vanbrugh Park Road, Greenwich, the second of the three children of Charles Edward Davison (1822–1893), retired merchant and ‘gentleman’, and his second wife, Margaret Caisley (1848–1918). Her mother ran a shop in Longhorsley, Northumberland, after the death of her husband left the family in straitened circumstances.

Emily Davison was educated by a resident governess at her family home, Gaston House, near Sawbridgeworth, Hertfordshire, and at Kensington high school (1885–91) and Royal Holloway College (1891–3). After the death of her father she worked as a governess in order to complete her studies, spent a term (April–June 1895) at St Hugh's Hall, Oxford, and in the summer of 1895 achieved first-class honours in English in the Oxford University examination for women, though, as Oxford degrees were closed to women, this did not enable her to graduate. She subsequently taught at the Church of England College for Girls at Edgbaston (1895–6), the Seabury School, West Worthing (1896–8), and privately thereafter until 1908 or 1909. In the meantime she obtained a London University degree, having matriculated as an external student in 1902, and graduated with third-class honours in modern languages in 1908.

In 1906 Emily Davison joined the Women's Social and Political Union (WSPU) and in June 1908 acted as chief steward at Marylebone Station for the union's first major procession to Hyde Park. By April 1910 she was working for the WSPU and contributed articles and reviews to their newspaper, Votes for Women, until December 1911. However, in keeping with her consistent rejection of authority, she soon fell out of favour with the WSPU leadership over her independent and unauthorized programme of militant actions.

Davison notably hid in the House of Commons three times, including in April 1911 when she spent the night in a cupboard near the crypt chapel in order to avoid participating in the census. She was imprisoned eight times, for offences including obstruction, assault, stone-throwing, breaking windows, and setting fire to pillar boxes, during which she went on hunger strikes, suffered solitary confinement and force feeding, barricaded herself in her cell, had a hosepipe turned on her, and attempted suicide as a protest against the mistreatment of her fellow suffragette prisoners.

Emily Davison's writings consist mainly of letters to the press and accounts of her militant activities, although she also wrote speeches, articles, and scenes for plays. Most remain unpublished, although her essay 'The price of liberty', in which she reveals her Christian feminist faith, was published posthumously in The Suffragette. She was 'an active and involved' member of the Workers' Educational Association and the Central Labour College (Morley and Stanley, 170), and her socialist sympathies are evident in the tone of the memorial leaflet produced on her death, as well as in the significant socialist and Labour presence at her funeral procession.

Among Emily Davison's close friends were Rose Lamartine Yates, Elinor Penn-Gaskell, Edith Mansell-Moullin, and Mary Leigh—all prominent and active members of the suffrage movement. Sylvia Pankhurst, in The Suffragette Movement (1931), describes her as 'tall and slender, with unusually long arms, a small narrow head and red hair. Her illusive, whimsical green eyes and thin, half-smiling mouth, bore often the mocking expression of the Mona Lisa' (Crawford, 160). She never married and had no children.

On 22 June 1912, after throwing herself onto a staircase at Holloway prison, Emily Davison told the medical officer that she had done so because she felt 'that a tragedy was wanted' (Hansard 5C, 25 June 1912, 216). She is usually remembered as the ‘suffragette martyr’ for her last protest at the Epsom Derby in June 1913. As the horses rounded Tattenham Corner she ducked under the railing and ran out onto the course in front of the king's horse, Anmer, which struck her with its chest and knocked her down. Among the articles found in her possession were two WSPU flags, a racecard, and a return train ticket to Victoria. She remained unconscious for four days and died on 8 June 1913 at Epsom Cottage Hospital as a result of a fracture to the base of the skull. The coroner recorded a verdict of death 'due to misadventure'. It is not known whether she intended to commit suicide. Queen Mary's first thought was for 'poor Jones', the jockey, and she referred to Davison as 'the horrid woman' (Pope-Hennessy, 467).

A public funeral was held in London on 14 June 1913. Emily Davison's body was taken from Epsom and escorted, by a large and spectacular procession, from Victoria to St George's Church, Bloomsbury, where a memorial service was held, and afterwards to King's Cross where the body was entrained for Northumberland for burial at the parish church of St Mary's, Morpeth, on 15 June.