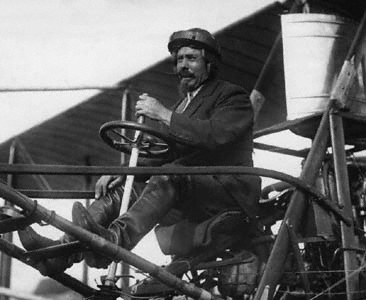 by unknown photographer, 1912 [at the controls of his aeroplane Cathedral]

Cody [formerly Cowdery], Samuel Franklin (1861–1913), showman and aeronautical designer, was born on 6 March 1861 in Davenport, Iowa, USA, the fourth of five children of Samuel Franklin Cowdery (1833–1902), a former Union soldier and jobbing carpenter, and his wife, Phoebe Jane (1834–1900). After education in local schools, he left home at the age of about fifteen to join a circus, and he adopted the name S. F. Cody, Jr, in emulation of the well-known showman Colonel W. F. ‘Buffalo Bill’ Cody, leader of a famous ‘Wild West’ touring company. On 8 April 1889 he married Maud Maria Lee, the daughter of Joseph Lee of Norristown, Pennsylvania, who assisted in his trick shooting act.

Cody left the USA late in 1890 for England; he was followed a few weeks later by his wife, and they performed a cowboy act in English music halls before moving to the continent in 1892. Soon afterwards Cody and his wife separated, and Cody began living with Lela Marie King (1853–1939), along with two of her younger sons from her previous marriage to Edward King, a licensed victualler. Lela, born Elizabeth Mary Davis, was the daughter of John Blackburn Davis, a horse dealer, and she and her sons took part in Cody's act. Cody's wife appears to have returned home to Norristown in 1892, apparently destitute and feeble-minded; she was later incarcerated in a local psychiatric hospital.

While touring with the company in Europe, Cody and Lela had a son, born in Basel in 1895. During this period Cody constructed an elaborate account of his life, in which he claimed to have been born in Birdville, Texas, in 1861, and to have spent several years as a cowboy and trail-rider, with a spell of gold mining in the Yukon in 1883–4. He claimed that he had then met Lela in Texas, and that their two sons were born there, before embarking on his career as a ‘Wild West’ performer. Such a fictive biography was perhaps not unusual in the theatre, but it undoubtedly added to the authenticity of Cody's show. By the time Cody returned to England in 1896 the original trick shooting and horse-riding acts had expanded to a full ‘Wild West’ show in which his 'wife and sons' took part. Cody's most famous melodrama was The Klondyke Nugget, first staged in 1898.

From 1900 Cody became actively interested in kite flying, and patented a man-carrying kite system in 1901. In 1903 he sold four sets of kites to the Admiralty; in 1905 the army ordered kites and engaged Cody to instruct the Royal Engineers in their operation. He thus became involved with the balloon factory at Farnborough, under Colonel J. E. Capper, and gave up his theatrical activities. Capper wished to develop both airships and aeroplanes for military use, and he took advantage of Cody's mechanical and practical skills to promote this work. Cody was largely responsible for the engine installation of the airship that flew in 1907, and he designed and constructed the machine on which he made the first powered aeroplane flight in Great Britain on 16 October 1908.

The War Office decided in 1909 to stop work on aeroplanes, but Cody was allowed to keep the machine. By July 1909 he was making successful flights of several miles, and in August he was awarded the Aeronautical Society's silver medal. In October he flew at the first British flying meeting at Doncaster, and there he became a naturalized British subject.

In the next four years Cody built some half-dozen aeroplanes, which he flew competitively with considerable success, winning four British empire Michelin trophies as well as other prizes. He won the military trials in 1912; the consequent War Office order for two machines was his only commercial sale. Cody was a tall, flamboyant character, and an exceptional pilot. He was widely admired by fellow pilots and show-business colleagues, as well as the general public.

On 7 August 1913, flying his latest machine, Cody crashed at Ball Hill, Cove Common, Farnborough; he and his passenger, W. H. B. Evans, were thrown out of the aircraft and killed. Cody was subsequently given a funeral on 11 August with full military honours by the Aldershot garrison, and he was buried in the military cemetery there. Following Cody's death, his legal wife's stepmother started a civil action for a share of the estate; settled in 1922, the proceeds were split between Cody's wife, Maud Maria, and his three sisters and brother. His archives were auctioned at Sothebys in 1996.

Close
Calendars of the grants of probate … made in … HM court of probate [England and Wales]
Hulton|Archive, Getty Images, London
National Archives of the United Kingdom, Public Record Office, London