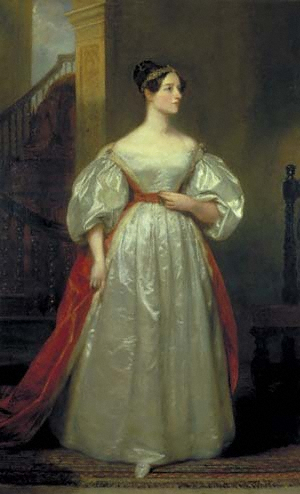 Is thy face like thy mother's, my fair child!Ada! sole daughter of my house and my heart?When last I saw thy young blue eyes they smiled,And then we parted—not as now we part, But with a hope.

Ada was brought up in the sole custody of her mother, who kept her out of the limelight. She was educated to be a mathematician and a scientist because her mother feared that she might turn out to be a poet like her father. A lonely but imaginative child, she was taught by a series of tutors (including the celebrated mathematician Augustus De Morgan) and at an early age was fascinated by mechanical things and toyed with the idea of designs for a flying machine powered by steam. When she was seventeen, in 1833, she met Charles Babbage, most likely through the natural philosopher Mary Somerville, a mutual acquaintance. Babbage showed Ada his first calculating engine, the difference engine, and her interest in mathematics was transformed from a duty to a joy. She attended lectures about the engine, examined the plans, studied and taught mathematics, and became part of the same social circle as Babbage. They had many friends in common, in addition to De Morgan and Somerville, including Charles Dickens and Sir Charles Wheatstone.

Ada is best-known for her incisive notes and comments on Babbage's plans for an analytical engine. Because she was an independent (albeit enthusiastic) observer, and possessed a marked talent for conveying new and sometimes difficult concepts in limpid prose, her writings on this topic are much valued by historians. In November 1834 Babbage first shared with her his general idea for a new calculating engine that would not only have foresight but could act on that foresight. According to Lady Byron's diaries, Ada was touched by the 'universality of his ideas' (Toole, 69). In 1843 she translated a paper by General L. F. Menabrea, later to be prime minister of Italy, describing Babbage's main attempt to implement this notion, the projected analytical engine (which was to supersede the aborted difference engine but which was never built). She added extensive notes to Menabrea's paper which contain not only what is regarded as one of the earliest computer programs but also prescient comments about the future of such an engine, which have stood the test of time. Her correspondence with Babbage about the time that she was preparing this work for publication elaborates further on her idea of what would now be termed a program, and, moreover, places it in the context of its possible use. Thus on 10 July 1843 she suggested to him:

I want to put in something about Bernoulli's Number, in one of my Notes, as an example of how an explicit function, may be worked out by the engine, without having been worked out by human head and hands first.

Though other instances of what might be regarded as a program of instructions for the engine to calculate numbers have been found, the Bernoulli numbers were a perfect choice of example with which to differentiate Babbage's analytical engine from all other calculating engines.

Ada's work was published in September 1843 in Taylor's Scientific Memoirs (vol. 3) as 'Sketch of the analytical engine invented by Charles Babbage esq. by L. F. Menabrea, of Turin, officier of the military engineers'. The translator and annotator is not identified on the title page, but each of her notes is individually signed AAL (Augusta Ada Lovelace). She asked penetrating questions about how the analytical engine might be applied, and hypothesized that if it could understand the relations of pitched sounds and the science of harmony 'the engine might compose elaborate and scientific pieces of music of any degree of complexity and extent' (Scientific Memoirs, 3, 1843, 694). She also saw the graphical potential of the analytical engine, and that by changing to a new medium, the punched card, scientific information would be seen in a new light. Thus, in a famous and influential metaphor, she wrote 'Analytical Engine weaves algebraical patterns just as the Jacquard loom weaves flowers and leaves' (ibid., 696).

Interestingly, Ada also saw the limits of such a technological innovation and described the tendency people have to 'first, overrate what we find to be … remarkable, and secondly, by a sort of natural reaction, to undervalue the true state of the case' (Scientific Memoirs, 3, 1843, 722). Her comment 'The Analytical Engine has no pretension whatever to originate anything' evokes and anticipates the heated debate between proponents of artificial intelligence and those who believe the human mind cannot be reduced to a machine.

On 8 July 1835 Ada married William King, eighth Baron King of Ockham (1805–1893), lord lieutenant of Surrey. He was created earl of Lovelace in 1838. They had two sons, Byron Noel (1836–1862) and Ralph Gordon (1839–1906), who were successively Baron Wentworth (Ralph succeeding his father as second earl of Lovelace), and a daughter, Anne Isabella Noel Blunt, an equestrian, who wrote A Pilgrimage to Nejd (1881) and was married to the poet Wilfrid Scawen Blunt.

After Ada, Lady Lovelace, wrote the 'Sketch' in 1843 her health, which was always fragile, became worse. Physicians prescribed laudanum, and many of the extensive letters she left were written under the influence of her illness and drugs. She hypothesized a 'calculus of the nervous system' (Toole, 296) but at the same time was sceptical of the claims of mesmerism's ability to cure tumours. Her social circle expanded to include not only Sir David Brewster and Michael Faraday but intellectual characters who were also great followers of the horse races, such as members of the Zetland family. She gambled and won on the horses, and gambled and lost, and was at the mercy, both emotionally and financially, of several of her gambling friends. According to the bank books, her involvement in gambling stopped in June of 1851 when she suffered severe haemorrhages. In a panic Lord Lovelace went for help to Lady Byron, only to be faced with Lady Byron's concern being Ada's gambling, not her health. Until Ada's tragic death, from cancer of the uterus, at 6 Great Cumberland Place, London, on 27 November 1852, she was in excruciating pain, bedridden, and, because of financial need, at the mercy of Lady Byron who took over the Lovelace household and prevented Babbage from seeing her daughter.

On 3 December 1852 Ada was buried (at her own request) next to her father in the parish church of St Mary Magdalene in Hucknall near Lord Byron's ancestral home at Newstead Abbey. In 1979 a computer software language, the official language of the United States department of defense, was named ‘Ada’ in her honour and in 1993 a blue plaque was erected at her home at 12 (formerly 10) St James's Square, London, in commemoration of her being a 'pioneer of the computer'.