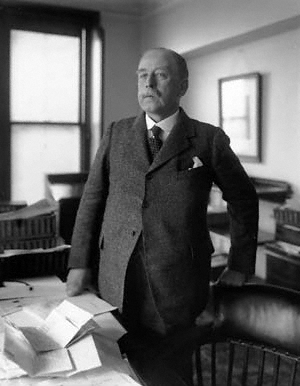 Younger, George, first Viscount Younger of Leckie (1851–1929), brewer and politician, was born on 13 October 1851 at the Brewery House, Bank Street, Alloa, Clackmannanshire, the eldest of six children of James Younger (1818–1868) and his wife, Janet (d. 1912), elder daughter of John McEwan, of Alloa. Robert Younger, Baron Blanesburgh was his younger brother. Educated at Edinburgh Academy and, briefly, at the University of Edinburgh, Younger at the age of sixteen succeeded his father as head of the family brewing business, George Younger & Son, established by his great-great-grandfather. On 10 June 1879, he married Lucy (d. 26 May 1921), daughter of Edward Smith, MD, FRS, of Harley Street, London, and Heanor, Derbyshire; they had three sons.

Younger was a member of the Clackmannanshire county council from 1890 to 1906 (convenor, 1895–1906); a member of the royal commission on the licensing laws in 1896; vice-president of the County Councils Association of Scotland in 1902–4; and president of the National Union of Conservative Associations of Scotland in 1904. After unsuccessfully contesting Clackmannan and Kinross (1895, 1899, 1900) and Ayr burghs (1904), he was elected Unionist MP for Ayr burghs in 1906, representing it until 1922. He was recognized as a capable debater in the Commons, notably when opposing the ‘people's budget’ in 1909. He became a respected and popular Scottish whip, and was a candidate to succeed Lord Balcarres as Unionist chief whip in 1913. He was awarded a baronetcy in 1911. Younger achieved historical significance, however, not as a parliamentarian but as a party organizer and adviser to successive party leaders. In 1911 Arthur J. Balfour, the Unionists' leader, appointed Younger to a blue ribbon committee to reform the party organization, which created the posts of party chairman and treasurer. These officers were to take over from the chief whip management and fund-raising for the unionist central office and the party outside parliament. As Scottish whip, Younger retained considerable autonomy, managed several Unionist by-election victories, and in 1914 was one of ten Unionist leaders to sign the new year's message to party activists.

In 1917 Younger succeeded Arthur Steel-Maitland as party chairman. He whipped into shape a party machine seriously weakened by the war, appointing new constituency agents and London office staff. He prepared energetically for the general election expected to follow the 1918 Reform Act, which more than doubled the electorate. After parliament was dissolved in November 1918, he revised and edited the so-called 'coupon letter' issued by prime minister David Lloyd George and Unionist leader Andrew Bonar Law to the official Coalition Liberal and Unionist candidates. Younger looked upon the coalition as a necessary evil to keep a possible labour–socialist government from power. He regretted the issuing of the coupon to many Coalition Liberals, as it forced Unionist candidates to stand down after nursing their constituencies, with his help, for years. He was especially irritated that his subordinates had mistakenly assigned six Scottish coupons to the Coalition Liberals. However, he heatedly denied Liberal charges that he had outmanoeuvred Lloyd George and the Coalition Liberal chief whip, Frederick Guest, in a 'Scottish grab' of constituencies for the Unionists. The 1918 election campaign, resulting in the return of many unattractive 'hard-faced men', prejudiced Younger against the new parliament. He hoped for Unionist withdrawal from the coalition once the latter had implemented its pledge to reform the House of Lords into a powerful second chamber.

Between 1919 and 1921 Younger worked closely with the Unionist chief whip, Sir Robert Sanders, a tory squire who largely shared his negative view of the coalition. Although Younger asked to be relieved as party chairman after his wife's death in 1921, Austen Chamberlain, the new Unionist leader, persuaded him to stay on. Younger had been on excellent terms with Chamberlain's predecessor, Bonar Law, a fellow Scot, but the new leader treated him rather coolly. Younger was also disturbed by Chamberlain's admiration for Lloyd George and his support for Unionist–Coalition Liberal fusion into a new centre party.

Differences between Chamberlain and Younger came to a head in January 1922, when the latter strongly opposed Lloyd George's plan to seek an early new mandate for the coalition. Although Chamberlain himself criticized this strategy, he was indignant when Younger attacked the scheme in the Unionist press. To the annoyance of Lloyd George and Chamberlain, Younger also sent a circular letter to Unionist constituency chairmen warning that the prime minister's scheme would split their party from top to bottom.

Younger again clashed with Chamberlain in September 1922. The Unionist leader now supported Lloyd George's call for an election. Younger realized that Lloyd George and Chamberlain wanted to preclude a probable vote by the forthcoming Unionist annual conference to withdraw from the coalition. Infuriated by Lloyd George's abuse of royal honours and his attempt to exploit the Chanak crisis with Turkey to stay in power, and convinced that the coalition ministry would not reform the House of Lords, Younger determined to use his influence to bring down the government. During early October 1922 he worked closely with Stanley Baldwin, Sir Arthur Griffith-Boscawen, Sir Samuel Hoare, and other anti-coalitionists within the government and the Unionist parliamentary party. Younger (assisted by Sanders, now a junior minister) was the chief liaison between these Unionist rebels and Bonar Law, whom he was trying to persuade to lead the revolt.

It was Younger, more than anyone else, who induced Bonar Law to attend the decisive meeting of the Unionist parliamentary party at the Carlton Club on 19 October 1922 and to furnish the moral support needed to jettison the coalition. In the election campaign that followed, his command of the party machine was strengthened rather than weakened by Lord Birkenhead's gibe that he was the cabin boy who had taken over the ship. Younger's fear that the Unionists could obtain no more than a small majority of seats, and might even lose, was proved unduly pessimistic by the election results.

In 1923 Younger exchanged the party chairmanship for the office of treasurer, and went to the Lords as first Viscount Younger of Leckie. His power and influence within the Conservative Party (as it was again called) remained high during the next six years. To obviate another financial scandal such as had clouded the tenure of the previous treasurer, Lord Farquhar, he arranged that party funds should be safeguarded in a complicated system of trusts. He also insisted that the party chairman should be responsible for raising party funds. He argued strongly for the utmost probity in party money-raising, and its divorce from the honours list. He was pleased when his protégé, J. C. C. Davidson, assumed the chairmanship in 1926, and they worked together amicably. Although frequently critical of Stanley Baldwin's party leadership, Younger staunchly supported him as an obstacle to revival of the coalition spirit.

Younger died of a heart attack, while attending the theatre in London, on 29 April 1929, and was buried at Alloa. His successor as second viscount was his eldest son, James Younger (1880–1946). Two other sons had been killed in action, the second in the South African War and the third in the First World War. Younger was chairman of the family brewing firm until his death, and was also a director of the National Bank of Scotland, Lloyds Bank, the North British and Mercantile Insurance Company, and the Southern Railway. At the time of his death he was lord lieutenant of Stirlingshire and vice-lieutenant of Clackmannanshire.