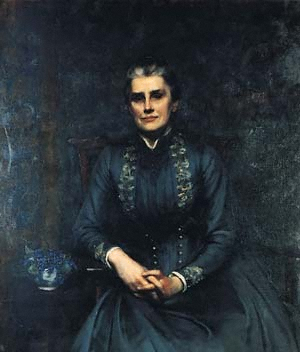 Wordsworth, Dame Elizabeth [pseud. Grant Lloyd] (1840–1932), college head, was born on 22 June 1840 at Harrow on the Hill, Middlesex, the eldest of the seven children of Christopher Wordsworth (1807–1885), headmaster of Harrow School, from 1844 canon of Westminster, and from 1868 bishop of Lincoln, and his wife, Susanna Hatley Frere (1811–1884). In 1844 the family moved to 4 Little Cloister, in the precincts of Westminster Abbey, and from 1851 until Elizabeth was twenty-eight they usually spent four months of each year in Westminster and eight in Stanford in the Vale, in Berkshire, where her father held a living. She was educated at home, apart from one rather fruitless year at a boarding-school in Brighton when she was seventeen. Her father, intelligent governesses, and her own wide reading provided a substantial but uneven academic education. She learned almost no mathematics or science, but studied Latin, history, modern languages, English literature, drawing, and singing, and taught herself Greek from her younger brother John Wordsworth's school books in order to read the New Testament and Homer. Christian faith shaped her upbringing profoundly, and throughout her life she treasured the liturgy, devotion, and traditions of high-church Anglicanism. Her piety was straightforward, scholarly, and practical, rooted in detailed study of the Bible and theology, but also in humdrum parish work in rural Stanford. Westminster, meanwhile, gave access to clerical and academic society in London, to galleries, and the theatre. From the age of thirteen she also travelled extensively in Europe with her family, and continued to do so with relatives and friends all her life.

Elizabeth was intelligent, witty, and unusually well read in several languages. Her father relied on her as a research assistant for an ambitious Bible commentary, and then as his secretary when he was appointed bishop and the family moved to Riseholme Palace near Lincoln. She never queried the convention by which her brothers John and Christopher were sent to Winchester College and then Oxford and Cambridge respectively, while she, as a girl, was educated informally at home. But when the headship of an Oxford hall of residence for women students was proposed to her in 1878 she accepted, and her father approved, although her brother John, then a fellow of Brasenose College, Oxford, saw no need for such an initiative.

During the ten years between the move to Riseholme and Elizabeth Wordsworth's appointment as founding principal of Lady Margaret Hall, her range of friendships and academic interests widened, and she became a writer. From 1868 she experienced a particularly close relationship with Edward White Benson, headmaster at Wellington College and examining chaplain to her father at Lincoln, and his wife, Minnie. The Wordsworth and Benson families saw a good deal of one another, but Edward Benson and Elizabeth became especially intimate friends, passionately sharing intellectual and ecclesiastical interests in long conversations and letters. Her friendship with Edward Benson was expansive and personally engaging in a way that was not repeated with any other man. By the mid-1870s the intensity of communication had abated, while her friendship with the Benson family as a whole continued.

In 1870 Elizabeth met the novelist Charlotte Mary Yonge in Oxford and they became lifelong friends. Elizabeth herself published a first novel, Thornwell Abbas, in 1876 under the pseudonym Grant Lloyd, followed by a second, Ebb and Flow, in 1883. From the early 1870s she also wrote poems, plays, stories, essays, and devotional pieces, as well as co-authoring a biography of her father in 1888. She acquired the reputation of a minor poet. She often stayed with her brother John and his wife in Oxford, and became a regular and popular participant in Oxford dinner parties. She attended lecture courses by the historian Robert Laing in the series given from 1873 onwards by Oxford dons for women, and wrote essays for Laing which he thought outstanding. Whether socially or through these lectures, she met many of the men and women who were determined to provide a university education for women in Oxford, including Edward Talbot, founding warden of Keble College, and his wife, Lavinia. She was not herself part of this pioneering group; her own energies were concentrated on her family, her writing, and her father's work in Lincoln.

In November 1878 Elizabeth Wordsworth accepted Edward Talbot's invitation to become principal of a residential hall for women that a committee of high-church Anglicans was establishing in Oxford. Her interest in higher education for women owed nothing to feminist principle, and everything to her conviction that well-educated women would be better wives and mothers and more useful members of the Church of England and of English society. She proposed that the new hall be named after Lady Margaret Beaufort, mother of Henry VII and a patron of the arts and learning, whom she described as a gentlewoman, a scholar, and a saint. She wanted her students to be all three.

Lady Margaret Hall (LMH) accepted its first students in 1879, and Elizabeth remained its principal until her retirement in 1909. She was small, brisk, confident, and outspoken, and she brought to the new venture her characteristic generosity of mind and informality. Although her ideal was a family-sized community, plans for expansion were drawn up almost immediately, and she was impatient to see them implemented. The first new building to be added to the original Victorian villa was designed by Basil Champneys and completed in 1884. One of the four buildings by Reginald Blomfield that established the central form and classical style of the college was opened in 1896 and, at the insistence of the LMH council, bore her name, with the second following in 1910, the year after her retirement. Student numbers rose from nine in 1879 to fifty-nine in 1909. The individual students rather than the institution were always her main interest. She enjoyed their company, and encouraged them to walk, row, play tennis and hockey, and to ride bicycles when these appeared, seeing no need to impose further restrictions beyond the already strict conventions of the period. She expected them to be lively as well as hard-working. The students in turn found her inspiring, entertaining, and idiosyncratic. They listened to her Bible studies on Sunday evenings, acted in her annual plays, met the many visitors who called to see her, monitored her odd taste in headwear, and enjoyed having such a learned and notable, if sometimes disconcerting, character as their principal. Some of them were also deeply disappointed by her lack of interest in feminist causes, including the suffrage, and irritated by her conventional views on a woman's main role as wife and mother. She was none the less clear-sighted about the need of many women to be financially and emotionally self-reliant, and was determined to equip them to make their way independently.

In 1886, a year after Bishop Wordsworth died, Elizabeth unexpectedly inherited £600 from his estate, and decided to found St Hugh's Hall in his memory, for women students who could not afford the fees at LMH. This personal initiative was a great success; the hall later became St Hugh's College, Oxford. Meanwhile she continued to be a generous benefactor of LMH, giving or loaning money on several occasions for its development. Elizabeth Wordsworth, founder of one hall for women and founding principal of another, none the less managed to keep a low profile in the controversy in the 1890s over whether to admit women to the BA degree. She eventually argued for it, even though the LMH council opposed it, but she did not have very strong views on the matter. She was adamant, however, that a proposal being discussed at the same time, to introduce a non-resident diploma for women, would undermine the existing halls, and she opposed her council's support for it. An initiative that gained her full approval and active commitment was the opening of the Lady Margaret Hall Settlement in Lambeth in 1897, with its obvious practical commitment to those in need.

In 1900 Elizabeth Wordsworth gave up her house in Lincoln to live all year round in Oxford, first at Gunfield House, next door to LMH, and then, after retirement, at 12 Rawlinson Road. She received an honorary MA from Oxford University in 1921, one year after degrees were opened to women. She was elected an honorary fellow of Lady Margaret Hall and of St Hugh's in 1926. In the jubilee year of LMH, 1928, she received the honorary degree of DCL from Oxford University and was made a DBE. She died at her home in Rawlinson Road on 30 November 1932, and was buried on 5 December in Wolvercote cemetery, the most unselfconscious yet the most influential pioneer of women's university education that Oxford had known.