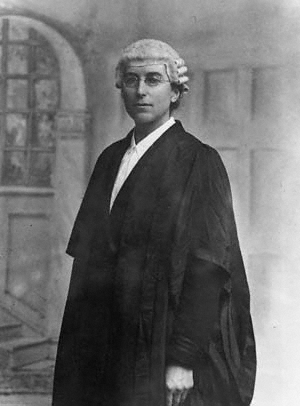 The Principal and Fellows of St Anne's College, Oxford

Educated privately with her brother, Ivy Williams studied Latin, Greek, Italian, and Russian, travelled in Europe, and spoke French and German fluently. At nineteen she joined the Society of Oxford Home Students (later St Anne's College), under its first principal, Mrs Arthur Johnson, was taught by Edward Jenks and William S. Holdsworth, and took a second class in jurisprudence in 1900 and in the BCL examination in 1902. She also took a second class in the London University examination, obtaining an LLD in 1903. Owing to the restrictions on women students she was not able to matriculate at Oxford until 7 October 1920, and received her BA, MA, and BCL a week later on 14 October 1920.

In that same year women were first admitted to the inns of court and Ivy Williams, who was already forty-two years old, with the sponsorship of Sir John Simon, joined the Inner Temple on 26 January 1920. On 10 May 1922 she was called to the bar by Henry Dickens on a final bar examination certificate of honour (first class), awarded in Michaelmas term 1921, which excused her two terms' dinners and thereby gave her priority over some forty women who, though anxious to be called, had either not passed their final examinations or kept the terms required by the ordinances prior to call. Thus Ivy Williams became the first woman to be called to the English bar, though Ulster-born Frances Kyle had been called six months earlier to the Irish bar. The strength of her feelings at this lengthy deferment of recognition by the bar is evidenced by her comment, reported as 'a threat' by the Law Journal (34, 1904, 1–2):

The legal profession will have to admit us in their own defence … a band of lady University lawyers will say to the Benchers and the Law Society ‘Admit us or we shall form a third branch of the profession and practice as outside lawyers’.

Having characterized her comment in 1904 as 'a futile attempt of a persistent lady to gain admission to the Bar', the Law Journal revised its view, describing Dr Williams's call to the bar in 1922 as 'one of the most memorable days in the long annals of the legal profession'. Even so, its editor, noting that she did not intend to practise, concluded that the admission of women 'was never likely to be justified by any success they will achieve in the field of advocacy' (Law Journal, 57, 1922, 161).

From 1920 to 1945 Ivy Williams was tutor and lecturer in law to the Society of Oxford Home Students. She was elected an honorary fellow of St Anne's College in 1956. She was a dedicated teacher and scholar and devoted endless thought and care to the work and careers of her pupils and to the general advancement of women in the legal profession. Recognition in her lifetime came by way of academic honours. In 1923 she was awarded the degree of DCL at Oxford, the first woman to be thus honoured. The award was in respect of the publication of The Sources of Law in the Swiss Civil Code, described as 'an extremely readable introduction to the study of the latest of the great continental codes' (H. F. Jolowicz, Cambridge Law Journal, 2, 1924, 132) and 'an excellent monograph … not withstanding occasional symptoms of inexperience' (E. Schuster KC, Journal of the Society of Comparative Legislation and International Law, 5, 1923, 216–26). In 1925 she published The Swiss Civil Code: English Version, with Notes and Vocabulary, which, as she herself noted in the introduction, received the appreciation of the Swiss federal authorities. Her two books were republished in 1976. She served in 1930 as delegate to The Hague conference for the Codification of International Law, under Sir Maurice L. Gwyer, and in 1932 as a member of the Aliens Deportation Advisory Committee under Roland Vaughan Williams.

In appearance Ivy Williams was slender, above average height, dark-haired, and possessed of fine blue eyes. Her recreations included tennis, travelling, gardening, and driving. From 1920 she lived at 30 Staverton Road, Oxford, and shared a house near Ludgershall, Buckinghamshire, with Miss Nora MacMunn, tutor in geography and sister of Lieutenant-General Sir George Fletcher MacMunn. Shy and reserved in manner, Ivy Williams was a woman of strong religious belief and the highest principle and to her friends and those who worked with her she was kind, wise, mild, and full of humour. After her mother's death in 1921 she was comfortably off and quietly made a number of generous benefactions to academic, medical, and other causes.

In her later years, realizing that her eyesight was failing, Ivy Williams taught herself to read braille and found so much difficulty that she systematized her learning, first into a booklet and later into a braille primer which was published for the National Institute for the Blind in 1948 and went into more than one edition. She herself had correspondence pupils in many parts of Britain whom she taught to read and write in braille almost to the end of her long life. She died at her Oxford home on 18 February 1966. 'Of no one could it more truly be said', wrote Miss Ruth Butler, former vice-principal of the Society of Oxford Home Students, in her obituary, 'that “she turned her necessity to glorious gain”, using in old age for the service of others her powers and enthusiasm which had won her distinction in her youth'.