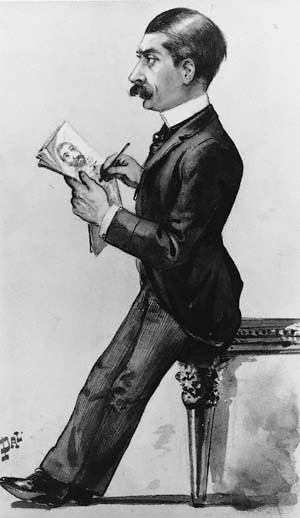 Ward, Sir Leslie [pseud. Spy] (1851–1922), caricaturist and portrait painter, was born on 21 November 1851 in Harewood Square, London, one of the eight children of the history painter Edward Matthew Ward (1816–1879) and his wife, Henrietta Mary Ada Ward (1832–1924), a fashionable portrait painter, art teacher, and hostess. Although they had the same surname before marriage, his parents were not related. Both were history painters of some note. His mother came from a line of painters and engravers, including her father, the engraver and miniature painter George Raphael Ward [see under Ward, James (1769-1859)], and her grandfather, the celebrated animal painter James Ward. She was niece and great-niece respectively of the portrait painter John Jackson and the painter George Morland. Both parents had studios in their homes, Upton Park, Slough, Buckinghamshire, and Kent Villa, Kensington, London, where they entertained the London artistic and literary haute monde. His father was an exceptional mimic who delighted Charles Dickens and other eminent guests, and it may be inferred that Ward's eye for caricature was awakened in response to the lively atmosphere of his parents' home. Although they never gave their son formal training, they and their artistic friends encouraged the young Ward to draw, paint, and sculpt.

After preparatory instruction at Chase's School at Salt Hill, near Slough, Ward was sent to Eton College where he drew caricatures of his schoolfellows and masters. In 1867 his bust of his brother was exhibited at the Royal Academy, London. An undistinguished student, he left Eton in 1869 when his father attempted to deflect him into architecture. After an unhappy year in the office of the architect Sydney Smirke, who was a family friend, the artist W. P. Frith intervened on his behalf and Ward's father agreed to support his training as an artist. He thus entered the Royal Academy Schools in 1871.

Some artists rebelled against what they perceived as the stultifying influence of the Royal Academy; but not Ward, who found what he called the 'back to land' movement 'blatant realism that becomes nauseous' (L. Ward, 49). He might have made a living painting portraits and pictures which satisfied the tastes of prosperous Victorians, but his métier was polite caricature. In the winter of 1873 the painter John Everett Millais, another family friend, recommended that he bring his caricature of the comparative zoologist ‘Old Bones’ (Professor Richard Owen) to the founder owner and editor of Vanity Fair, Thomas Gibson Bowles. Having temporarily fallen out with Ape (Carlo Pellegrini), Bowles noted Ward's ability to capture the likenesses of prominent public figures and invited him to join the staff of Vanity Fair. As his nom de crayon, Ward suggested to Bowles that he use 'Spy … “to observe secretly, or to discover at a distance or in concealment”. “Just the thing”, said Bowles' (ibid., 94).

Between 1873 and 1889, the year of Pellegrini's death, both he and Ward dominated the weekly coloured cartoon featured in Vanity Fair. The bohemian Pellegrini—witty, volatile, and gregarious—had developed the portrait chargé in Vanity Fair. He claimed that he taught Ward all he knew, a charge Ward later wished he had denied (L. Ward, 95–6). Ward was an observant caricaturist, especially effective in his treatment of judges, preachers, and literary figures. His witty caricature of the portly, myopic Anthony Trollope for Vanity Fair in 1873 (National Portrait Gallery, London), infuriated the novelist. Among the 1325 cartoons he drew for Vanity Fair between 1873 and 1911 are a significant number of revealing caricatures which captured the public persona of the victim. His portrayals, however, of royalty, nobility, and women were over-sympathetic, if not sycophantic. Later in his career he became even more of a complimentary portraitist, a charge he acknowledged in Forty Years of Spy (1915), his genial, rambling memoir. Nevertheless, in 1900 he produced a penetrating and clever picture of Field Marshal Lord Roberts, and his 1907 sketch of the Conservative politician F. E. Smith (Lord Birkenhead) was a devastating indictment of an ambitious and unpleasant man.

Ward worked methodically, often from memory, after observing his ‘victims’ in their element at the racecourse, in the law courts, in church, in the university lecture theatre, or in the lobby of the houses of parliament. Sometimes they came to his studio. A caricaturist, he believed, was born, not made. As he observed, 'A good memory, an eye for detail, and a mind to appreciate and grasp the whole atmosphere and peculiarity of the “subject” are of course essentials' (L. Ward, 109). A caricature should never depend on a physical defect, nor should it be forced. 'If I could sum up the art in a sentence it would be that caricature should be a comic impression with a kindly touch, and always devoid of vulgarity' (Matthews, 57).

Ward was droll, gentle, and something of a snob. He lived a comfortable, pleasant, upper-class bachelor life in London. His family connections, education, and personal acquaintances meant that he was a member of society. His clubs included the Arts, the Orleans, the Fielding, the Lotus, the Punch Bowl, and the Beefsteak (where he was one of the original members). There he sketched many of his victims. In 1899, years after her father had refused Ward permission to marry her, Ward married the society hostess Judith Mary Topham-Watney, the only daughter of Major Richard Topham, 4th hussars. They had one daughter, Sidney.

Ward's last cartoon for Vanity Fair appeared in June 1911; he had recently begun to contribute ‘character’ portraits to The World and Mayfair. He supplemented his income and fulfilled his artistic yearnings by painting portraits, some of which are still extant. In 1918 he was knighted. Eileen Harris observed that 'Spy spent forty years being a tamed Ape' (Harris, 56), a not inconsiderable accomplishment. Ward prophesied that 'when the history of the Victorian Era comes to be written in true perspective, the most faithful mirror and record of representative men and spirit of their times will be sought and found in Vanity Fair' (L. Ward, 331). Vanity Fair portraits are still referred to by many as ‘Spy Cartoons’. After a nervous breakdown Ward died suddenly of heart failure at 4 Dorset Square, Marylebone, London, on 15 May 1922 and was buried on 18 May at Kensal Green cemetery, London. About 300 of his original drawings for Vanity Fair are in the National Portrait Gallery, London.