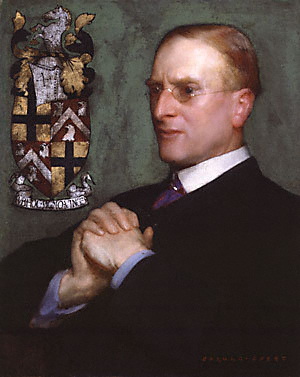 Voysey, Charles Francis Annesley (1857–1941), architect and designer, was born in Hessle, near Hull, on 28 May 1857, the third child and eldest son of the six daughters and four sons of the Revd Charles Voysey (1828–1912) and his wife, Frances Maria, née Edlin. His father was expelled from the Church of England in 1871 for heretical doctrines and then founded the Theistic church. The experience of his father's ecclesiastical trials, which became a national cause célèbre when he was a young adolescent, instilled in the young Voysey a romantic admiration for the martyr's plight. He regarded his architectural philosophy as an extension of his father's teaching and throughout his career the uncompromising clarity and reforming simplicity of his work were inseparable from a profound belief in heredity. Voysey could trace his ancestry back to John Wesley, whose sister was his great-great-great-grandmother, and he delighted in a physical resemblance to Wesley: in later life he modelled for a portrait of him.

Voysey was educated at home until the family moved to London in 1871, when he was sent, for two years, to Dulwich College. His academic work was undistinguished and, believing himself to be the dunce of the family, he later claimed to have become an architect because it was the only profession for which one did not need to pass any examinations. His grandfather Annesley Voysey (c. 1794–1839) [see under Voysey, Charles] had been an architect. From 1874 to 1879 Voysey was a pupil of John Pollard Seddon, an architect of the Gothic revival. After a brief period as an assistant in Saxon Snell's office he became 'an improver' in the office of George Devey, whose practice consisted mainly of large country houses.

Voysey commenced practice on his own account in London in 1881. In 1885 he married Mary Maria, daughter of Henry Evans, of Torquay; they had two sons, one of whom became an architect, and one daughter. His first commission for a house was not executed until 1888 and during his early years in practice his income was dependent upon wallpaper and textile designs. He is reputed to have learned the art of pattern design from Arthur Heygate Mackmurdo and initially he was better known as a decorative designer than as an architect. In 1896 The Studio magazine claimed that the name Voysey had become to wallpaper what Wellington was to the boot. Throughout his career Voysey was acutely aware of the advantages of good publicity. A speculative design for a cottage, published in The Architect in 1888, attracted his first client for The Cottage at Bishop's Itchington, Warwickshire, and he commissioned photographs of his newly completed houses and interiors which were then published in British, American, and German magazines. He was a regular exhibitor at the Royal Academy, where he showed watercolour perspectives of his buildings, and he exhibited furniture, decorative designs, and domestic objects as well as photographs of his buildings with the Arts and Crafts Exhibition Society in London.

Early published drawings describe a stylistic debt to the picturesque, half-timbered buildings of R. Norman Shaw and Devey. Voysey's individuality as an architect, however, and the distinctive ‘Voysey style’ were founded on a rational and artistic interpretation of the modern country cottage. His standard prescription for domestic design resulted in long, low houses with plain roughcast walls, buttresses at the angles, grey or green slate roofs of steep pitch with gables, small low leaded windows with square stone mullions and dressings, and tapered chimney pots. Voysey designed every detail of his houses and by 1895 hinges terminating in heart motifs, elongated handles, and ventilator grilles depicting birds and berries—all wrought or cast to his designs—were specified as standard for his houses. His buildings were extremely simple and, although they were not particularly cheap, their economic plans, solid workmanship, and their use of good-quality materials earned them a reputation for good value. In his rejection of the elaborate quasi-Elizabethan style affected by Devey, Shaw, and Sir Ernest George, Voysey may certainly be described as the originator of a new movement; moreover, he was the mentor of Charles Rennie Mackintosh, W. M. Dudok, and J. J. P. Oud, usually acclaimed as pioneers.

Between 1890 and 1914 Voysey enjoyed an extensive domestic practice, and his methods of design had a considerable vogue abroad, enhanced by the publication between 1900 and 1905 of books by Hermann Muthesius in German. Among the many country houses built by him during this period are: Walnut Tree Farm at Castlemorton, Worcestershire; Perrycroft at Colwall, Herefordshire; Lowicks at Frensham in Surrey; Hill Close at Studland Bay in Dorset; Greyfriars House at Puttenham in Surrey; Norney at Shackleford in Surrey; New Place at Haslemere in Surrey; Moorcrag and Broadleys, both at Windermere in Westmorland; Spade House (for H. G. Wells) at Sandgate in Kent; his own house, The Orchard, at Chorleywood in Hertfordshire; The Pastures at North Luffenham in Rutland; Holly Mount at Knotty Green in Buckinghamshire; The Homestead at Frinton-on-Sea in Essex; Littleholme at Kendal, Westmorland; and Brooke End at Henley in Arden in Warwickshire.

He also produced designs for houses in Egypt and Massachusetts. In Chelsea he erected town houses in Hans Road and numerous studios for artists. Other work included inns at Elmesthorpe and at Stetchworth, near Newmarket, a cottage hospital near Beaworthy in Devon, an extension to Sanderson's factory at Chiswick, and office interiors throughout Britain for the Essex and Suffolk Equitable Insurance Society. Occasionally he submitted designs in competition for public buildings, but none was successful. All through his active career he was a hard worker and a confirmed individualist. He conducted his practice on somewhat old-fashioned lines, doing most of the work himself and relying for the rest mainly upon pupils. He published only one book, Individuality (1915), and a pamphlet, Reason as a Basis of Art (1906).

The outbreak of the First World War virtually extinguished Voysey's practice but it had already begun to decline by 1906. His condemnation of the classical and neo-Georgian architectural styles which became fashionable around the turn of the century, on the grounds that they were un-English, lost him potential clients. His refusal to compromise his own artistic ideals in order to comply with the wishes of his patrons may have contributed to his eclipse. Whatever the cause, he ceased to figure prominently in English architecture, although he continued to submit designs to competitions and he executed a few war memorials. He was out of harmony with the general body of his profession until his last years, being opposed to the registration of architects and to the system of education favoured by the Royal Institute of British Architects, but he was elected a fellow of that body in 1929 and was awarded the royal gold medal for architecture in 1940. For many years he was a zealous member of the Art-Workers' Guild, of which he was master in 1924. Late in life he was granted a civil-list pension.

From 1917 Voysey chose to live alone in a service flat in St James's Street, and spent most of his days at the Arts Club not far away, where he had many friends. Somewhat below the middle height, he never played games or read novels, but he was fond of company and enjoyed an argument. Intellectually he was an artist rather than a scholar. Voysey died at his home, Park House, Winchester, on 12 February 1941.