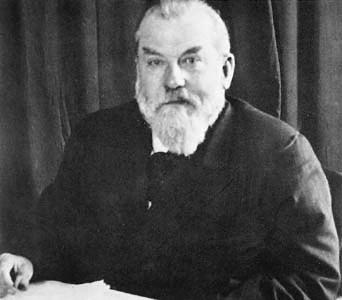 by permission of the People's History Museum

Turner, Sir Ben (1863–1942), trade unionist and politician, was born at Boothhouse, Austonley, a hamlet 2 miles from Holmfirth, Yorkshire, on 25 August 1863, the second son of Jonathan Turner and his wife, Emma (née Moorhouse). His father worked in mills, operating a woollen power-loom, and his mother had been a hand-loom worker (she was illiterate at the time of Turner's birth). Both sides of Ben's family were chapel folk and both parents were radicals in politics. His father, who read radical newspapers at the village cobbler's shop, was a great admirer of Ernest Jones and the Chartists and an active trade unionist, who was on the local committee at the time of the great weavers' strike in Holmfirth in 1872 and later a member of the Power-loom Weavers' Union. Turner was greatly influenced by his father, in his politics, his trade unionism, and in a taste for homely dialect verse.

Turner went to a dame-school then to a national school. As a member of a large family (three boys, four girls), he began to contribute to the family income six months before he was ten, working as an assistant in hand-loom weaving to both his aunt and an elderly man. At ten he became a half-timer, attending school only half the day and working the rest in a mill, a practice which he later campaigned against as a trade union official. At Easter 1877 the family moved to Huddersfield, the second time that Ben had left the vicinity of his village.

In Huddersfield Turner attended the secular Sunday school, becoming its secretary at eighteen. There he heard addresses by Annie Besant, G. J. Holyoake, Harriet Law, Dr Aveling, and others. He went to the mechanics' institute night school, read widely, and wrote labour notes for a local radical newspaper. On 5 October 1884 Turner married Elizabeth (1857/8–1939), daughter of Joash Hopkinson, a cotton spinner. A piecer in a spinning mill, she subsequently became an active suffragette. Turner and his wife had five daughters; they were both anti-vaccination campaigners and were taken to court for refusing to have their daughters vaccinated.

In 1882 Turner joined the Weavers' Union, established in 1881 in Huddersfield, and became actively involved in its committees and as a speaker from 1885. Historically, trade union organization was weaker in wool than in cotton: wool spinning was traditionally carried out in small and scattered units, and power-looms had spread more slowly. Turner was therefore faced with a surplus of labour (with male wages tending to drift down towards women's rates).

In 1887 Turner was victimized for his trade union work, spending a period unemployed before working as a clothing salesman and then an insurance agent. By this time he was a member of the Social Democratic Federation (SDF), joining in late 1886 after witnessing the suppression of a banned SDF unemployed demonstration in Trafalgar Square on 9 November 1886. Turner was strong in his commitment to the labour movement, but his socialist views were conciliatory not revolutionary. He was a believer in joint conciliation schemes with employers, publicly praising such systems of 'cosy co-operation' (Wrigley, 7).

In August 1889 Turner moved to Leeds after being offered work there writing for the Yorkshire Factory Times. He combined writing for this and the Workman's Times, started in 1890, with trade union work. He spoke across the midlands and north, and was actively involved in major strikes such as that at the Manningham mills in 1890–1. In 1889 he joined the Leeds Trades Council, which sent him as a delegate to the 1890 Trades Union Congress, and the Leeds Socialist Society.

Turner was a member of the Fabian Society for a few years, and was foundation secretary of the Batley branch in 1891 and treasurer of the Yorkshire society. However, the main focus of his activities was the Independent Labour Party (ILP), of which he was a founder member in 1893. He was a delegate from the Batley Labour Party which held its meetings in his house. The ILP provided a congenial home for Turner and his moralistic, pacifist, and moderate socialism. Turner also increasingly played a role in national Labour politics. He was elected to the national executive committee of the Labour Representation Committee and the Labour Party for 1903–4 and then 1905–21, when he retired in favour of serving on the general council of the TUC. He chaired the 1912 Labour Party conference. He stood for parliament in 1906, 1908 (by-election), December 1910, and 1918 before being elected for Batley and Morley in 1922 and in 1923. After defeat in 1924, he won again in 1929, but lost in 1931. He held office as secretary for the mines from June 1929 to September 1930.

Turner attended pre-war congresses of the Second International, including those in London in 1896 and Basel in 1912. He was a founder in 1894 of the International Textile Workers' Federation. In 1910 he went to St Louis as a TUC fraternal delegate to the American Federation of Labor conference. In 1920 he was chairman of the British Labour delegation to Russia, which went at the time the labour movement was campaigning against allied intervention in Russia. Turner was impressed by Lenin but not by his revolutionary politics.

Turner's greater role was as a trade union leader. With Allen Gee (1852–1939), he became a leading figure of Yorkshire woollen trade unionism. After part-time union work, in 1892 he became secretary of the Heavy Woollen district branch of the West Yorkshire Power-loom Weavers' Association. He worked to bring all textile workers into the union (which became the General Union of Weavers and Textile Workers in 1900 and the General Union of Textile Workers in 1912). By 1919 his union had taken over the Yorkshire Factory Times, now named Labour Pioneer, and Turner edited it until it ended with the general strike, in 1926. He was the first president of the National Union of Textile Workers (1922–33). From 1917 to 1929 he was also president of the National Association of Unions in the Textile Trade. He was a member of the general council of the TUC from 1921 until 1928.

As president of the TUC in 1927–8 Turner took part in the discussions with a group of major industrialists led by Sir Alfred Mond, known as the Mond–Turner talks. These talks explored possibilities for substituting joint consultation and co-operation for conflict in British industry. This was a reaction against the bitter confrontations in British industrial relations of the post-war years that had led to the general strike in 1926. Nevertheless the talks built on a strong strand of labour movement sentiment in favour of conciliation committees, which had been evident even in 1919–26 and was embodied by Turner as well as by figures such as Arthur Henderson and J. R. Clynes.

Turner was very proud of being a Yorkshireman. He missed few opportunities to publish his dialect verse in a range of local and Labour newspapers. In 1934 his collected Rhymes, Verses and Poems from a Yorkshire Loom were published, with a foreword by Philip Snowden. Turner was generally a good-natured man whom most found to be agreeable company. In his later years he was teetotal. He deplored bringing issues such as birth control into politics, observing that 'sex complexities' were 'extraneous' to socialism. For him, 'Labour stands for cleanliness of mind, body and soul' (About Myself, 162 and 169).

As a tireless campaigner for trade unionism and a pioneer socialist, Turner was widely respected in the labour movement. In national politics, however, he was a worthy rather than a front-rank figure. Turner died at his home, The Homestead, 25 Carlton Avenue, Batley, Yorkshire, on 30 September 1942, and his ashes were scattered over the family grave at Batley cemetery. His wife predeceased him in 1939.