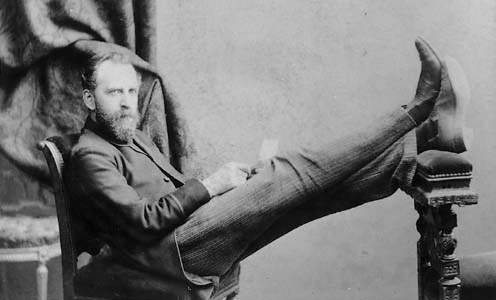 Stead, William Thomas (1849–1912), newspaper editor and spiritualist, was born in Embleton, Northumberland, on 5 July 1849, the son of a Congregational minister, the Revd William Stead (1814–1884), and his wife, Isabella Jobson (1824–1875), both of Yorkshire stock and Scandinavian descent. There were two daughters and, in addition to William, three sons. After tutoring by his father at Howden-on-Tyne until the age of twelve, and two years (1861–3) at Silcoates School, near Wakefield, Stead worked as an apprentice clerk in the counting-house of a merchant (also Russian vice-consul) in Newcastle upon Tyne. Encouraged by John Copleston, first editor of the Liberal Darlington Northern Echo, to write for the paper, Stead was a regular contributor until he succeeded his mentor as editor during April 1871. Two years later, on 10 June 1873, he married a childhood friend, Emma Lucy Wilson (1849–1932) of Howden; they had four sons and two daughters.

As an innovative and unconventional editor Stead made the Northern Echo one of the most renowned north country dailies by committing the paper to most of the agenda of the radical Liberals, the political leadership of Gladstone, and the religious and social endeavours of the Salvation Army. He also committed the Echo to advocating compulsory primary and secondary school education, universal male and female suffrage, repeal of the Contagious Diseases Acts, 'social purity' in politics, collective bargaining in industrial relations, and the eight-hour working day for coalminers. He also advocated radical foreign policies, calling for international arbitration, home rule for Ireland, ‘sane’ British imperial expansion, self-determination for the Balkan Slav nationalities, an Anglo-Russian entente, and Anglo-American amity. He maintained an unrelenting opposition to the poor law, as well as to Disraeli's foreign and imperial policies, jingoism, and war. Stead's greatest successes with the Northern Echo were his major contributions to inaugurating the 'Bulgarian atrocities' agitation in 1876 and to Gladstone's massive victory in the north country during the Midlothian election in 1880. These achievements not only made agitations and crusades major aspects of Stead's version of the 'new journalism' but facilitated (on Gladstone's recommendation) his appointment during July 1880 as assistant editor of the Pall Mall Gazette, a London paper which had only recently become a Liberal Party organ with John Morley as editor. The Morley–Stead combination, although often fraught, proved so successful that on Morley's departure for parliament in August 1883 Stead was appointed editorial director of the Gazette. Assisted by editorial assistants including Alfred Milner and Edward Tyas Cook and by a young, devoted staff Stead quickly moved to increase the circulation and influence of the paper by endeavouring to make it 'the great tribune of the poor', the conscience of the wealthy, and especially 'a centre of live power' in Britain and its overseas empire. By such journalistic innovations as bold headlines, pictorial illustrations, special interviews, provocative leading articles, attractive drama criticism, perceptive book reviews by such writers as William Archer, Bernard Shaw, George Meredith, and Oscar Wilde, and special ‘extra’ editions, the Pall Mall Gazette was made a force to be reckoned with in British politics. Stead's sensationalism and strong convictions, and his bold discussions of political and social issues and problems and of foreign affairs, were well reflected in a series of scoops, agitations, and campaigns during 1883–5. These included Andrew Mearns's exposé of urban housing for the poor ('The Bitter Cry of Outcast London'); the demand for the dispatch of ‘Chinese’ Gordon to evacuate Anglo-Egyptian garrisons from the Sudan (which resulted in the death of Gordon at Khartoum); the 'Truth about the navy' revelations in 1884 (which led to the enlargement and modernization of the Royal Navy); the resolution of the Anglo-Russian Panjdeh dispute in 1885 over the Afghan frontier in central Asia; and the 'Maiden tribute of modern Babylon' revelations and agitation in July 1885 (which forced the government to raise the age of consent for young girls and restricted white slavery and juvenile prostitution by passing the Criminal Law Amendment Act of 1885). Although lauded by many social reformers, including the Catholic Cardinal Manning, some Anglican prelates, the majority of nonconformist clergy, and most feminist groups, for his Maiden Tribute agitation Stead was denounced by the London press for 'peddling pornography', and because of a technical violation of the law in obtaining material for the Maiden Tribute revelations was tried and sentenced to three months' imprisonment (he subsequently liked to sport his convict's uniform).

The Maiden Tribute campaign was the high point of Stead's career in daily journalism. By 1886 his agitations and political interventions had alienated the majority of the press and many politicians in both parties, including his former patron, Gladstone, and had intensified Stead's lifelong vendetta against Joseph Chamberlain because of his intense distrust of Chamberlain's character and policies. During his last five years with the Pall Mall Gazette he propounded and sought to implement his 'government by journalism' facet of the 'new journalism'. This was largely responsible for the destruction of Sir Charles Dilke's political career and involved the strong defence of alleged victims of social and legal injustice, such as Mrs Florence Maybrick, Mrs Mildred Langworthy, and Miss Elizabeth Cass. The Gazette vigorously condemned the government's violation of civil liberties and arbitrary police conduct, especially during and following the ‘bloody Sunday’ affair in Trafalgar Square (November 1887). On behalf of the Irish home-rule cause it kept silent on Charles Stewart Parnell's liaison with Mrs Katharine O'Shea and defended Parnell during the Times Pigott forgeries episode (1888–9). Radical politics were put into practice, as the Gazette provided equal opportunity employment for women. Stead also achieved a great journalistic coup by securing interviews with Tsar Alexander III and Count Lev Tolstoy in Russia during 1888.

Following unresolved disputes with the proprietor of the Pall Mall Gazette, Henry Yates Thompson, Stead left the paper in early January 1890 to found the monthly 'non-partisan' Review of Reviews. Established in a brief partnership with George Newnes, which was soon to be superseded by a loan from the Salvation Army and a subvention from Cecil Rhodes, the journal was a highly successful venture, with counterparts quickly instituted by Stead in the United States (1891) and Australia (1892). In the Review of Reviews, as in the Pall Mall Gazette, he advocated the union of English-speaking peoples, the expansion and federation of the British empire, Irish home rule, and the maintenance of morality in government and politics. Given these objectives it is hardly surprising that he should have turned on Parnell and campaigned to oust the Irish nationalist leader from politics because of his adultery and, unsuccessfully, sought to prevent Dilke from resuming his political career (1891–2) on the grounds that he was an 'unredeemed' adulterer. He also endeavoured to popularize and enhance the ambitions and projects of his friend Cecil Rhodes; to advance the political careers of John Morley and Alfred Milner; to improve the spiritual and moral quality of British life; to facilitate Anglo-Russian and Anglo-American understanding and amity; and to support the suffragist and temperance movements and the work of the Salvation Army. Stead helped to ghost-write General William Booth's In Darkest England and the Way Out (1890). In addition he promoted the modernization and efficiency of British industry and reform of the British medical profession.

During the 1890s Stead also intensified his lifelong interest in psychic phenomena, establishing the short-lived quarterly Borderland (1894–6) and publishing some of his personal experiences with automatic writing in Letters from Julia (1897). He also popularized the Oberammergau passion play (1890) and personally conducted a crusade for civic reform in Chicago (1893–4). He endeavoured to launch a protest movement against the Turkish massacres in Armenia (1895–6) and, while remaining an ardent advocate of British naval supremacy, called for arms limitation to obviate a ruinous arms race between the great powers and the establishment of a system of international arbitration to avert devastating wars (1894–8). In a period that began with his active involvement in the promotion of the First Hague Peace Conference (1898–9) and lasted until his death fourteen years later, Stead worked tirelessly on behalf of the world peace movement. It was his devotion to this cause which in large part motivated his unrelenting opposition to the South African War (1899–1902) in the press and on the public platform, even though it resulted in the breach of friendships with Rhodes, Milner, and several old colleagues and associates, and incurred severe circulation losses and financial difficulties for the Review of Reviews.

The last decade of Stead's life was marked by bitter disappointments and sadness. His attempt to establish a morning Daily Paper in 1904 failed and brought him to the brink of bankruptcy, from which he was rescued by the Rhodes Trust and the generosity of several friends. His staunch belief in, and well-publicized experimentation with, spiritualism and his advocacy of unpopular causes evoked derision of his claims and some ridicule of his credulity and judgement. Worse still, the sudden death of his eldest son, William Thomas, in 1907 devastated him. But throughout these travails he carried on, reporting and intervening in the Russian Revolution of 1905, participating in the preliminaries and the proceedings of the Second Hague Peace Conference during 1907, assailing the 'Germano-phobia' of the British Foreign Office, promoting Anglo-German press understanding and conciliation, condemning Italian atrocities in the Italo-Turkish War of 1910–11, and, as ever, advancing the cause of world peace through international arbitration and Anglo-American collaboration.

Stead had often predicted that he would die either by lynching or by drowning. He drowned at sea in the Titanic disaster on 15 April 1912, while travelling to speak on world peace at the Great Men and Religions conference in New York city on 22 April. It was typical of his generosity, courage, and humanity that Stead was last seen leading women and children to the safety of the stricken liner's lifeboats. He was best remembered by his contemporaries not only for his devotion to the international peace movement but also for his advocacy of women's rights, defence of civil liberties, and concern for the deprived and oppressed. His obstinacy on certain moral issues and credulity on some aspects of psychic phenomena were more than balanced by his strong fidelity to friends, sincerity, and infinite generosity to all who sought his help. Above all Stead was influential in demonstrating how the press could be used to influence public opinion and government policy, for his skilful use of investigative journalism, and for his use of the interview to revitalize British journalism.