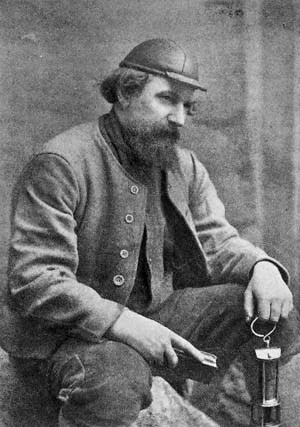 Skipsey, Joseph (1832–1903), poet, was born on 17 March 1832 at Percy Main near North Shields, the eighth child of Cuthbert Skipsey (d. 1832) and his wife, Isabella (née Bell). Cuthbert, overman at Percy Main colliery, was shot dead by the special constable against whom he was defending a pitman in the bitter strike into which Joseph was born. The killer served a six-month sentence, but Isabella received no pension or relief, and was soon forced to send her children down the pits, where Joseph went at the age of seven. As a trapper, opening and closing ventilation doors for sixteen hours a day, he taught himself to read and write from discarded playbills and advertisements. His first books were the Bible, Pope's Iliad, and Paradise Lost, gifts from an uncle when he was fifteen. Soon afterwards Skipsey became a putter, with higher pay, and studied Shakespeare, Burns, Blake, and some translations from Latin, Greek, and German, particularly Heine's poems and Goethe's Faust.

At twenty Skipsey walked most of the way to London, where in 1854 he married Sarah Ann Hendley (d. 1902), his landlady, with whom he soon returned north, first to work in Coatbridge, Scotland, for six months, then at the Pembroke collieries in Sunderland, and subsequently at Choppington. The couple had eight children. Skipsey was a strong and skilful hewer; intelligent and reliable, he was quickly promoted to pit deputy, but disliked the responsibilities and returned to hewing, where he stayed until retirement except for short spells at jobs obtained for him by admirers.

Skipsey's first volume of poems, published at Morpeth, Northumberland, in 1859, went largely unnoticed, and no copy is extant, but it attracted the attention of James Clephan, editor of the Gateshead Observer, who got Skipsey the post of an under-storekeeper at Gateshead. In the year of his next publication, Poems, Songs and Ballads (1862), 200 men and boys were killed by choke damp in Hartley colliery. In their memory Skipsey wrote 'The Hartley Calamity', a beautiful and dignified ballad which he read at many meetings to raise funds for Hartley widows and orphans. Greatly moved at one of these readings, Robert Spence Watson became a lifelong supporter of Skipsey, obtaining for him the job of assistant librarian to the Newcastle Literary and Philosophical Society in 1863. Meagre pay induced Skipsey to return to the pits—where he would remain for twenty years—the following year, when The Collier Lad and other Lyrics (1864) was published, followed by Poems (1871), and A Book of Miscellaneous Lyrics (1878, re-issued with additions as A Book of Lyrics in 1881).

By this time Skipsey was enjoying some celebrity as ‘the Collier Poet’, and in 1880 Thomas Dixon, a Sunderland cork-cutter whose writings had brought him into contact with John Ruskin, took him to London, where he met the leading intellectuals of the day. Largely because of Edward Burne-Jones' influence, Skipsey was granted a civil-list pension of £10, raised in 1886 to £25, with a donation of £50 from the Royal Bounty Fund. Skipsey left the pits again in 1882, when he and his wife became caretakers of the Bentinck board schools in Mill Lane, Newcastle, for three years. Spence Watson's patronage again got Skipsey employment as a porter at the newly opened Armstrong College in 1888, but it lasted only a few months: 'it was quite impossible to have a college where the scientific men came to see the Principal and the artistic and literary men came to see the porter' (Bunting, 10). In 1889 a glittering company, including Burne-Jones, Browning, Tennyson, William Morris, and Lord Leighton, sponsored the 'tall, portly, well-proportioned man with a fine grave face' to become custodian of Shakespeare's house at Stratford upon Avon. Skipsey, deeply knowledgeable about Shakespeare's works, could not endure being 'a common showman' of counterfeit relics to troupes of tourists (Bradley) and he returned to the Northumberland pits in 1891. Skipsey's psychological experiences at Stratford suggested the theme of Henry James's story 'The Birthplace', in The Better Sort (1903).

Although Skipsey published Carols from the Coalfields (1886) during his unsatisfying period away from mining, most of his literary work in the 1880s was as general editor of the Canterbury Poets series, published by Walter Scott at Felling. His lecture 'The poet as seer and singer', was published in 1890. His last volume of poetry was Songs and Lyrics (1892). Skipsey later travelled with the Spence Watsons to the Lake District and the Norwegian fjords; he became a spiritualist for a time, believing himself to be clairvoyant. His last year was spent in the care of his twelve-year-old granddaughter, Jane Skipsey, and he died, a year after his wife, in his son's house at Harraton, near Newcastle, on 3 September 1903. He was buried in Gateshead cemetery, and was survived by the eldest of three daughters and two of his five sons: William was inspector of schools for Durham, James a master shifter at Montagu colliery in Scotswood, where the elderly Joseph had sometimes visited the colliery doctor whose son, Basil Bunting, edited a collection of Skipsey's poems in 1976.

Contemporary responses to Skipsey's poetry were mixed. Spence Watson was dismissive; but Oscar Wilde found his work reminiscent of Blake's, and Dante Gabriel Rossetti considered him 'a man of real genius … a poet of the people who describes what he knows and mixes in' (Bunting). A Book of Miscellaneous Lyrics was well reviewed by Theodore Watts-Dunton in The Athenaeum (16 November 1878), and translations of 'Fairies' Parting Song' and other poems appeared in Ernest de Chatelain's Beautés de la poésie anglaise, volume 3. Even Rossetti, however, found some crudeness of diction, rhyme, and rhythm in Skipsey's poems, as did Bunting, his most ardent proselytizer. His best lyrics, about mining life, bring written poetry close to nineteenth-century traditional oral dialect ballads. Although he read his poems in a strong accent and expected others to do so, unlike most dialect poets Skipsey did not attempt to transliterate dialect pronunciation, fully aware that however broadly ordinary working people spoke, they could read only standard English.