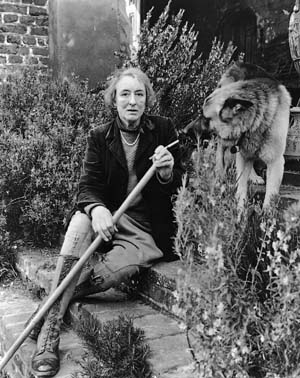 West, Victoria Mary [Vita] Sackville- (1892–1962), writer and gardener, was born on 9 March 1892 at Knole near Sevenoaks, Kent, the only child of Lionel Edward Sackville-West (1867–1928), and his wife and first cousin, Victoria Josefa Dolores Catalina Sackville-West (1862–1936), society hostess, the illegitimate daughter of Sir Lionel Sackville Sackville-West, second Baron Sackville (1827–1908), and the Spanish dancer Josefa de la Oliva (née Durán y Ortega, known as Pepita). Her father succeeded her grandfather as third Baron Sackville in 1908. She was known throughout her life as Vita. Her upbringing, both privileged and solitary, was shaped above all by the romantic atmosphere and associations of Knole, the sprawling Tudor palace set in a spacious park in Kent, where she spent her childhood. Her literary taste and temperament were created substantially by this aristocratic and historical backcloth and intensified both by the colourful and eccentric personality of her mother and by the gradual realization, with which she never entirely came to terms, that as a woman she could never inherit the Knole estate. Until she was thirteen she was educated by governesses at home before moving to Miss Woolff's day school in London, but her voracious reading in literature and history made her essentially an autodidact.

Sackville-West was also exposed to French culture from an early age through her mother's friendship with Sir John Murray Scott, ultimate residuary legatee of the art collector Sir Richard Wallace and owner of the Château de Bagatelle in Paris. Before the First World War she also enjoyed the opportunity to travel to Italy, Russia, Poland, Austria, and Spain. Throughout her life these cosmopolitan early years (which left the residue of fluency in Italian and French) were juxtaposed, and not without tension, with a deep sense of rootedness within the Kent countryside. She began to write at an early age and completed eight historical novels, five plays, and a number of poems before she was eighteen. She privately published a verse drama about the poet Thomas Chatterton in 1909. However, continual shadows played across her youth in both direct and indirect forms. Most publicly there were two lawsuits that threatened the security and reputation of her family: in the first her mother's relatives tried to prevent her father's inheritance of Knole, and in the second, where Vita was one of the major witnesses, the relatives of Sir John Murray Scott tried to overturn his large bequest to Lady Sackville on grounds of undue influence. Both were successfully overcome, but they took their toll on her parents' marriage. These events, combined with her mother's increasingly manipulative and emotionally quixotic behaviour, made the outwardly dominant and self-confident Sackville-West more diffident and uncertain.

On 1 October 1913, despite conducting love affairs with women, Sackville-West married Harold George Nicolson (1886–1968), son of Sir Arthur Nicolson (later Lord Carnock), at Knole. Sackville-West retained her maiden name. Nicolson was at this stage in his career a junior diplomat, and they began their married life in Constantinople, where he was currently posted. They returned to Britain in 1914 and their first son, Lionel Benedict Nicolson, was born in August that year. They lived both in London and at Long Barn, a house near Knole, which served as their country home between 1915 and 1930, where Vita wrote most of her early books and developed her first garden. A second son was stillborn in 1915, and their last child, Nigel Nicolson, was born in London in 1917. These years were crucial in three respects—for the emergence across a range of genres of her professional literary persona; for the full exploration of her sexual and emotional identity (what she called her dual nature); and perhaps above all for the maturation of an unconventional but harmonious marriage. Sackville-West, who signed all her books V. Sackville-West, published Poems of East and West in 1917, a collection of lyric poems composed while she was in Constantinople. In Heritage (1919), her first novel, she explored her own history through metaphors of genetic determinism, and in The Heir (1922) she vented her feelings about Knole. Knole and the Sackvilles (1922), a historical work, found a large audience which continued once public access to stately homes began to increase.

In the years immediately after the First World War Sackville-West became committed to a stormy and nearly self-destructive love affair with her schoolfriend Violet Trefusis (1894–1972), daughter of Mrs Alice Keppel, mistress of King Edward VII. The lovers travelled around Europe with Sackville-West occasionally cross-dressed as a fictive persona, Julian. They collaborated on a novel, Challenge (1923), that was published in America under Sackville-West's name but suppressed in Britain. It is dedicated to Violet and is about their relationship. Sackville-West very nearly left her husband altogether. However, this crisis in fact proved eventually to be the catalyst for Nicolson and Sackville-West to restructure their marriage satisfactorily so that they could both pursue a series of relationships through which they could fulfil their essentially homosexual identity while retaining a secure basis of companionship and affection. Sackville-West's other lovers included the journalist Evelyn Irons and Hilda Matheson, head of the BBC talks department, and she was also very close to Virginia Woolf, whom she met in December 1922. Sackville-West's Seducers in Ecuador (1924) was written for Woolf. Woolf returned the favour with her historical-fantasy novel Orlando (1928), a public love letter and tribute to Sackville-West. The novel sums up with unique subtlety and perception Vita's own multifaceted and sometimes discordant personality and her androgynous sexual appeal, historical imagination, and love of Knole. Meanwhile Sackville-West's marriage sought to explore the boundaries of friendship. Gradually a pattern emerged whereby Harold and Vita wrote to each other every other day, spending the weekends together in the country while following separate lives during the week in Kent and London. This framework was reinforced once Nicolson resigned from the diplomatic service in 1929 to follow a new career, first as a journalist and then as a politician.

As a writer Sackville-West enjoyed success in the 1920s as a prolific poet, novelist, and biographer. Her poem The Land (1926), dedicated to her lover, the poet Dorothy Wellesley, was an ambitious attempt to write a modern version of Virgil's Georgics by celebrating the annual round of the Kentish farming year. It rose above the conventions of Georgian poetry to achieve a personal vision, and proved enduringly popular. The poem received the Hawthornden prize in 1927. Even more successful in the short term was her novel The Edwardians (1930), which celebrated the lavish style of country house life that she had observed in her parents' heyday at Knole. Yet much of her best, most uninhibited, and least self-conscious writing was in travel pieces and essays, especially Twelve Days (1928), a book of literary sketches of the mountains of Persia, the result of a visit to her husband, who was posted to Tehran in 1925.

In 1930, when both Nicolson and Sackville-West were approaching middle age, they left Long Barn and purchased Sissinghurst Castle, the sketchy remains of a Kentish Elizabethan mansion, which they set about restoring and developing into the setting for a large-scale garden: this was a joint project where the principles of design were contributed by Nicolson and the planting schemes and maintenance by Sackville-West. In many ways it expressed a fusion of their own temperaments in which the effect achieved combined 'the strictest formality of design, with the maximum informality in planting' (Sackville-West, The garden at Sissinghurst, 403). The linked but individual sections of the garden were distinguished by predominant colour themes (such as the influential white garden), or by concentration on the flowers of a certain season, and simultaneously evoked characteristic English and Kentish gardens while also assimilating more exotic Mediterranean touches.

The responsibility of managing the garden ensured that Sackville-West lived a more solitary life at Sissinghurst than she had previously done at Long Barn, although there were frequent travels to Europe and a lecture tour in the USA in 1933. After her mother's death in 1936 she enjoyed relative financial security and was able to concentrate on her writing and her gardening plans, although she was also a regular broadcaster in the early days of BBC radio. In the 1930s her most notable works were two novels, All Passion Spent (1931), a story of an independent widow, and Family History (1932), and two biographical studies, St Joan of Arc (1936) and Pepita (1937), a memorable evocation of her mother and grandmother in which she tried to come to terms with the most unsettling and uncomfortable aspects of her early life and her dual nationality. During the Second World War, which she spent at Sissinghurst, she completed a novel, Grand Canyon, which imagined a German victory, and another long poem, The Garden (1946), which tries to sum up her own horticultural aesthetic and is in some respects superior to its predecessor The Land. It won the Heinemann award for literature in 1946. Alongside her work for the Kent committee of the Women's Land Army she completed another study of female sainthood, The Eagle and the Dove: St. Teresa of Ávila, St. Thérèse of Lisieux (1943). In 1948 she was appointed a Companion of Honour for her services to literature. The garden reached its full maturity in the 1950s, and in 1955 Sackville-West was awarded the gold Veitch medal of the Royal Horticultural Society. The popularity of Sissinghurst with the public, taken together with her highly successful gardening columns written in The Observer between 1946 and 1961, brought Sackville-West a kind of fame she had not anticipated, and which has been enhanced since her death by the transfer of the garden into the hands of the National Trust. Indeed, it is the image of Vita dressed as a gardener in gamekeeper's breeches and gaiters that has displaced in public memory the earlier depictions of her tall, strong-featured appearance by society painters such as de Laszlo and Strang. In her last decade she published a further biography, Daughter of France (1959), a study of ‘La Grande Mademoiselle’, the duchesse de Montpensier, and a final novel, No Signposts in the Sea (1961), a story of doomed love. In the course of 1961 she became seriously ill with stomach cancer, and she died at Sissinghurst on 2 June 1962. She was cremated and was buried in the Sackville family vault at Withyham, Sussex.

Sackville-West's unconventional personal life has provoked much discussion, and a BBC television series in 1989, thanks to her son Nigel's memoir Portrait of a Marriage (1973). It was based on a manuscript found in a locked Gladstone bag in the tower at Sissinghurst, written when Vita was twenty-eight. 'It was an autobiography … a confession, an attempt to purge her mind and heart of a love which had possessed her, a love for another woman, Violet Trefusis' (Nicolson, 1–2).

Sackville-West's career was the product of the irreconcilably disparate priorities within her own life, which enabled her to rise above conventional, stock literary forms while inhibiting her from attaining that unified 'central transparency' which Virginia Woolf prized as the mark of the entirely successful literary artist. It is perhaps no surprise in these circumstances that despite the genuine distinction of parts of her longer poems, her travel writing, and some of her biographies it is for the garden at Sissinghurst and her horticultural writing that she will be best remembered; for no other aspect of her creativity better synthesized and embodied the mysterious amalgam of alluringly romantic imagination, risk taking, and intelligent practicality that characterized both her life and the colourful persona which impressed her circle of friends so profoundly.