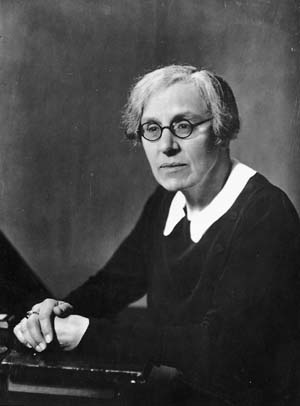 Royden, (Agnes) Maude (1876–1956), suffragist and preacher, was born on 23 November 1876 at Mossley Hill, near Liverpool, youngest of the eight children of Sir Thomas Bland Royden, first baronet (1831–1917), shipowner and MP, and his wife, Alice Elizabeth (1844–1932), daughter of Thomas Dowdall of Liverpool. She grew up at Frankby Hall in Cheshire. Articulate and devoutly Anglican, she was educated at Cheltenham Ladies' College, and at Lady Margaret Hall, Oxford, where she established a lifelong friendship with Kathleen Courtney. Maude's decision, on leaving Oxford, to take up work in a slum settlement was not remarkable at that time for a socially aware young woman, but bold for one who had to cope with lameness from congenital hip dislocation. She began with high hopes, but the eighteen months she spent at the Victoria settlement in Liverpool left her worn-out and disappointed. At a low ebb, she sought advice from a man she knew to be sympathetic: the Revd (George William) Hudson Shaw (1859–1944), a lecturer and leading figure in the Oxford University extension movement. He suggested a change of scene, inviting her to help in his Rutland parish. South Luffenham thus became her base from 1902 until 1905.

She grew strongly attached to Shaw and his mentally fragile wife, Effie, helping them revive a sluggish parish. Finding she had gifts of self-expression far beyond the needs of a Sunday school class, Shaw resolved to get her extension work, lecturing on English literature. Though the Oxford delegacy then employed only male lecturers, he insisted that they try her out. This was her start in public speaking: an apprenticeship that served her well in the context of women's suffrage, where she was soon a noted speaker for the non-militant suffragists under the leadership of Mrs Fawcett.

As rising militancy shook the nation, non-militants claimed the higher ground; and none more eloquently than Maude whose feminism stemmed from Christian faith. Who but Christ had seen women as human? In her eyes the women's movement was the most profoundly moral movement since the foundation of the Christian church. It did not seem so to the Church of England. There were very few clergy members of the Church League for Women's Suffrage, which she helped to found in 1909. But leading Anglicans sought her out, for the spirituality and unselfconsciousness with which she was able to address large audiences, especially upon moral questions. In 1913 the bishop of Winchester asked her to address 2000 men at the church congress, on 'social purity'—a burning question, given the concern at that time about the white slave traffic. In 1916 Archbishop Davidson put her on the council of his national mission which was to re-Christianize wartime England. Hundreds of missioners—clergy, laymen, even laywomen—were to ‘speak’ to the people. But Davidson suddenly got cold feet at the thought of women ‘speaking’ in church, contrary to custom, and with such as Maude likely to attract large congregations. In the end it was left to the bishops, many of whom—like the bishop of London—ruled that where women must speak in church for want of other accommodation, it should be only to their own sex, and only from the foot of the chancel steps.

Were there still untouchables, Maude wrote then, that women should be barred from holy places? It moved her nearer to what one friend called ecclesiastical militancy. In 1917 when the City Temple, the great Congregational church in Holborn, offered her a preaching post, she took it. Ecumenism was not in vogue and such mingling with nonconformists shocked even liberal Anglicans. For her, however, three fruitful years in the pulpit of the City Temple so confirmed her preaching vocation that she went further: again with help from her devoted friend, Hudson Shaw. Shaw had been since 1912 vicar of St Botolph without Bishopsgate and it was at his invitation that in 1918 she spoke in church on the League of Nations and Christianity. He was rebuked by the bishop of London. In 1919 Shaw asked her to preach at the three hours' service on Good Friday. The bishop forbade it, on the grounds that this was an especially 'sacred' service. Not long afterwards the stakes were raised when the former Church League for Women's Suffrage (a cause now won) resolved to campaign not only for the preaching but the priesthood of women.

It is not known when Maude herself first thought the unthinkable, that a woman might become a priest. Probably well before the war, for she answered a discreet enquiry in 1913 with, 'I go cheerfully as far as women Bishops and Archbishops and Popes' (M. Royden to U. Roberts, 8 March 1914, Women's Library, Women in the church). But she was caught up with suffrage then, and with pacifism during the war. The campaign launched in 1919, in which she took a leading part, looked to the forthcoming Lambeth conference to consider the ministry of women. Fired perhaps by post-suffrage euphoria, some of her friends now thought it likely she would become the first woman priest. But all they got was a recommendation that women be allowed to 'speak' in church, and even that was hobbled by the old restrictions. Despite these setbacks, the 1920s saw Maude at the height of her fame.

In 1921 Maude established the Guildhouse: an ecumenical place of worship, a fellowship, a social and cultural centre that soon became part of the London scene. It was a new start: for her, as preacher; for Martin Shaw, as organist and composer; and for the Revd Percy Dearmer, as professor of ecclesiastical art who transformed the big chapel in Eccleston Square. On Sunday afternoons there were talks by speakers foremost in politics and the arts. Maude preached at the Sunday evening service to a congregation from all over London. Even on weekdays the Guildhouse buzzed with its multiplicity of clubs and causes. In these unsettled post-war years Maude was in such demand to speak that, home or abroad, she was often billed as 'World famous woman preacher'. In 1923 in the USA she preached in churches and cathedrals, spoke in high schools and opera houses, to college students and businesswomen, pressing the Christian cause of peace and the need for the League of Nations. In 1928 her tour extended from the USA to New Zealand and Australia; thence to Japan and China and India. But while she was buoyed up by a sense of mission, the Guildhouse suffered from her absences. Later she regretted having turned increasingly to preaching as hopes of the priesthood faded. In 1936 when the Guildhouse closed, her sense of failure was not assuaged by her being by then a Companion of Honour and holder of honorary doctorates.

Maude supported but did not lead efforts in the anti-feminist thirties to extend the Anglican ministry of women. Peace was again her major cause and she joined Dick Sheppard's Peace Pledge Union, though in 1940 the Nazi threat led her to renounce her pacifism. In October 1944, not long after his wife's death, she married Hudson Shaw, with whom she had been in constant touch throughout all her activities. He was then eighty-five and died two months later. However, in 1947 she astounded even intimate friends with the revelation in A Threefold Cord of their passionate but platonic love for each other from first meeting in 1901. She died in Hampstead on 30 July 1956, leaving an adopted daughter, Helen.