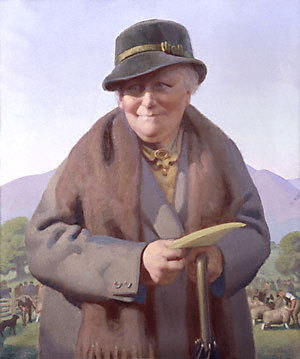 Potter [married name Heelis], (Helen) Beatrix (1866–1943), artist, children's writer, and sheep breeder, was born on 28 July 1866 at 2 Bolton Gardens, South Kensington, London, the elder child and only daughter of Rupert William Potter (1832–1914), a lawyer specializing as equity draftsman and conveyancer until he inherited a large fortune in 1883. A close friend of John Everett Millais and a gifted amateur photographer, Rupert Potter had in 1863 married Helen Leech (1839–1932), the youngest surviving daughter of the late John Leech, a prosperous cotton merchant from Stalybridge, near Manchester.

Beatrix, known by her second name to distinguish her from her mother, had a lonely childhood, looked after by nurses and taught by governesses. She was delicate and often ill, but she found great comfort in drawing and painting, encouraged by her parents, both amateur artists. When she was nearly six a brother, Walter Bertram, was born, although as soon as he was old enough he was sent away to school. Every summer the family took a large house in Perthshire and at weekends they visited Beatrix's grandfather, Edmund Potter, at his home, Camfield House, Hatfield. Both children soon became fascinated with the natural world, observing and recording the habits of animals and birds and, from an early age, they cared for a variety of pets. From 1881 to 1897 Beatrix kept an encrypted journal which, decoded in 1958 by Leslie Linder, provided valuable details of Potter's formative years, during which she was constantly drawing and painting.

In 1882 the family spent their first holiday in the Lake District, a part of England with which Potter would become identified. Her interests now included fossil-hunting, photography, and in particular the study of fungi. By 1893 she was painting and recording fungi in detail, encouraged by Charles McIntosh of Dunkeld, and in 1897, with the assistance of Sir Henry Roscoe (1833–1915), who was married to her aunt, Lucy Potter, she submitted a paper to the Linnean Society of London. 'On the germination of the spores of Agaricineae' by Miss Helen B. Potter was read on 1 April 1897, not by Potter herself, as women could not attend. Nor was the paper published—though on 24 April 1997, one hundred years later, recognition was finally given to Potter's research by the Linnean Society with a lecture by Professor Roy Watling of the Royal Botanic Garden, Edinburgh, entitled 'Beatrix Potter as mycologist'.

Whenever she was away from London, Potter sent illustrated letters to the children of her last governess, Annie Moore, and it is the story from one of these, written on 4 September 1893 to Noel Moore, that became her first published book. Rejected by a number of publishers, The Tale of Peter Rabbit was issued privately by Potter herself on 16 December 1901, in an edition of 250 copies, all the illustrations but the frontispiece in black and white. A small reprint followed in February 1902, and then a privately issued edition of The Tailor of Gloucester, before Frederick Warne & Co. persuaded Potter to redo the illustrations for The Tale of Peter Rabbit in colour for the publication in a trade edition on 2 October 1902. It was the first of twenty-two uniformly produced ‘little books’ by her, published by Warne, nineteen of them by 1913. With many of them featuring her own pets—Peter Rabbit, Benjamin Bunny, Mrs Tiggy-Winkle, and Samuel Whiskers—Potter's books have become classics of children's literature, with their sharp prose, their strong story lines, and their exquisite, freshly painted, and beautifully observed pictures.

In 1905 39-year-old Potter became engaged to her editor, Norman Warne, who died only four weeks later of leukaemia. She fled to Near Sawrey in the Lake District, to a working farm, Hill Top, that she had recently purchased with her royalties. It was the start of a new interest in her life, farming. Though still living with her now ageing parents in London, Potter spent as much time as possible at Hill Top, working on new books for Warne, adding to her farm stock, and acquiring land. On 15 October 1913, aged forty-seven, she married a local solicitor, William Heelis (1871–1945), son of the late John Heelis, rector of Kirkby Thore, and settled in Castle Cottage, Near Sawrey, keeping Hill Top as a place in which to draw and to store her treasures.

Over the next thirty years, Beatrix Heelis built up her Lake District property, improving the stock on her farms and becoming a prize-winning breeder of Herdwick sheep, president-elect of the Herdwick Sheepbreeders' Association, and a notable judge at local agricultural shows. She also bought up extensive tracts of land to save it from development by builders, often working in close association with the National Trust. She alerted them to properties and estates coming on the market and, through the sale of drawings (mainly to the USA), raised the money to buy pieces of land for them. In 1930 she purchased the 5000 acre Monk Coniston estate, on condition that the trust bought half of it from her as soon as they were able to raise the money. She then managed the entire estate herself for the next six years.

Beatrix Heelis died on 22 December 1943 at Castle Cottage of a heart attack following severe bronchitis. She was cremated in Blackpool nine days later, and her ashes were scattered on her land by her shepherd, Tom Storey. In her will she left everything to her husband, William Heelis, and on his death her fifteen farms, numerous cottages, and over 4000 acres of land to the National Trust. Hill Top was to be preserved as it stood and the sheep stock on her fell farms to be of the pure Herdwick breed. The copyright in all her published work was bequeathed to Norman Warne's nephew, Frederick Warne Stephens, and was ceded to Frederick Warne & Co. in 1970. Over sixty years after her death, Beatrix Potter's original artwork is held in national collections, the largest in the Victoria and Albert Museum in London and the Free Library of Philadelphia. Her books are available in thirteen languages and the characters from them feature on an extensive range of merchandise. The Beatrix Potter Society, formed in 1980, has a worldwide membership.