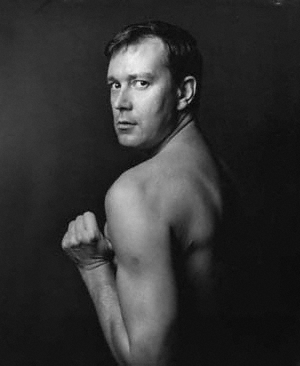 Orton, John Kingsley [Joe] (1933–1967), playwright, was born on 1 January 1933 in the Maternity Hospital, Leicester, the eldest of four children of William Orton (1905–1978), gardener, and his wife, Elsie Mary Bentley (1904–1966), machinist and charwoman. Their seaside-postcard personae of dissatisfied, domineering wife and frail, hen-pecked husband later resurfaced in their son's plays. Orton was educated at Marriots Road primary school and, after failing his eleven-plus, at Clark's College, where his mother enrolled him privately on a secretarial course. He was determined to improve both mind and body: the former with a process of self-education (he had read the whole of Shakespeare by the age of fifteen); the latter with a Charles Atlas chest-expander. He found escape from a series of badly paid, boring office jobs in the world of amateur dramatics. Then, after reading an article by Laurence Olivier on the availability of scholarships, and paying for elocution lessons to eradicate his east midlands vowels, he applied to the Royal Academy of Dramatic Art (RADA), and was accepted for 1951.

Orton was proficient enough to gain his diploma when he graduated from RADA in 1953, but his most dramatic encounter took place off-stage, with his fellow student Kenneth Leith Halliwell (1926–1967). Halliwell was seven years older than Orton and affected an air of superiority in both dress and manner. He had an impressive breadth of knowledge and a disconcerting physical presence. Whereas Orton felt alienated from his family, Halliwell was a genuine orphan. Whereas Orton had a puckish, round face, impeccable skin, and smouldering eyes, Halliwell was prematurely bald, heavy, and clammy. Nevertheless, unlike his fellow students, Orton did not dismiss Halliwell as a misfit. Instead, in his first term, he accepted Halliwell's offer to move into his West Hampstead flat. They lived together for the next sixteen years.

In the first years of their relationship Orton was happy to defer to the more experienced Halliwell. After a miserable four-month stint as an assistant stage manager at Ipswich Repertory Theatre, he willingly fell in with Halliwell's plan that they should devote their energies to writing. They lived a modest, almost monastic, existence, eking out Halliwell's small inheritance with a variety of odd jobs, rising at dawn and going to bed at dusk to save on electricity. They collaborated on a series of novels: 'The Silver Bucket' (1953), 'Lord Cucumber' (1954), 'The Mechanical Womb' (1955), 'The Last Days of Sodom' (1955), and 'The Boy Hairdresser' (1956). Each also wrote separately, with Halliwell producing 'Priapus in the Shrubbery' (1959), and Orton 'Between Us Girls' (1957) and 'The Vision of Gombold Proval' (1961).

None of the novels was published in Orton's lifetime, but 'The Vision of Gombold Proval' appeared posthumously as Head to Toe in 1971, and The Boy Hairdresser and Lord Cucumber were published in 1999. While each contains passages of comic invention, the overall effect is laboured, artificial, and monotonous. Between Us Girls, however, the diary of would-be actress Susan Hope, published in 1998, constitutes Orton's first exercise in literary ventriloquism which, paradoxically, led to the discovery of his own voice.

The turning point in the development of that voice took place in 1962, when both Orton and Halliwell received six-month prison sentences for stealing and defacing books from Islington Public Library. Orton later recalled their practice of doctoring covers and authors' photographs:

With an irony he would have relished, the contentious covers were later exhibited in the very library that originally brought the prosecution.

The two men responded to prison very differently: Halliwell attempted suicide, while Orton found it gave him a perspective he had hitherto lacked.

Being in the nick brought detachment to my writing. I wasn't involved any more and it worked. Before, I had been vaguely conscious of something rotting somewhere: prison crystallised this. The old whore society really lifted up her skirts and the stench was pretty foul.

The experience fired him. After two unperformed apprentice plays, Fred and Madge and The Visitors, his breakthrough came in 1963 when the BBC Third Programme accepted Ruffian on the Stair. By the time it was broadcast, Entertaining Mr Sloane had been produced at the Arts Theatre (1964), and audiences had been given their first taste of Orton's singular brand of sexual subversion, Oedipal outrage, and epigrammatic wit. Aspects of the plot were derivative of Pinter—though Orton himself considered the influence to flow in the other direction, claiming that Pinter could never have written The Homecoming without the example of Entertaining Mr Sloane. The language, however, was all Orton's own, a style that John Mortimer neatly dubbed 'South Ruislip Mandarin' (Lahr, 56).

In order to distinguish himself from John Osborne, John Orton became Joe. And, in the three years before his premature death, Joe Orton enjoyed all the success that John had lacked. Largely because of the enthusiasm and financial support of Terence Rattigan, Entertaining Mr Sloane transferred, first to the West End, where it ran successfully for five months, and then to Broadway, where critical hostility killed it. Its West End run was curtailed by the concerted efforts of ticket-sales chief Peter Cadbury and impresario Emile Littler, who led a backlash against the rash of so-called ‘dirty plays’.

Orton was astute enough to realize that his career would not be harmed by scandal (indeed, he fostered it himself in letters to the press from his female alter ego, Edna Welthorpe). He continued his project of comic sedition in The Good and Faithful Servant (1964) and Loot (1966), the latter of which underlined his disdain for taboos, with its farcical antics involving a corrupt police inspector, a murderous nurse, a devout Catholic widower, two sexually ambivalent youths, and a corpse. Many would argue with the attitudes that his drama embodied; few could dispute the force of the laughter it generated. Orton wrote the part of Inspector Truscott for his close friend Kenneth Williams, but Williams's baroque comic style, together with Peter Wood's ornate production, scuppered the play's chances, confirming Orton's instincts that 'unless Loot is directed and acted perfectly seriously, the play will fail' (Lahr, 241). Its London première, the following year, fared better, winning Orton the 1966 Evening Standard best play award and establishing its enduring place in the repertoire.

Loot's success sparked Orton's creativity. In the ten months between its London opening and his murder, he wrote one one-act play, 'Funeral Games', and revised two others, 'Ruffian on the Stair' and 'The Erpingham Camp', which were presented as the double bill Crimes of Passion (1967). He also completed a film script for the Beatles, 'Up Against It', which was never produced (though his work was later represented on screen by indifferent versions of Entertaining Mr Sloane, 1969, and Loot, 1970). His final play was the madcap farce What the Butler Saw. Like Loot it received an unsatisfactory première, in a star-studded production at the Haymarket (1969), and its rehabilitation had to wait until Lindsay Anderson's 1975 revival at the Royal Court.

What the Butler Saw, set in a psychiatric clinic where the doctors are far madder than any of the (unseen) patients, culminates in the descent of a Dionysiac figure, Sergeant Match, drugged and dressed in a woman's gown. In the diary that Orton had begun to keep at the instigation of his agent, Margaret (Peggy) Ramsay, he noted with approval Halliwell's recognition of his classical devices. But the couple's intellectual empathy was no longer mirrored elsewhere, and Halliwell felt increasingly sidelined in Orton's life. While Orton's artistic endeavours triumphed, his own exhibition of collages in a King's Road basement failed. While Orton was socially and sexually desirable (as witnessed by the diary record of his fervidly priapic adventures), Halliwell thought himself unloved. Finally, on 9 August 1967, he battered Orton to death at their home, 25 Noel Road, London, and swallowed a fatal dose of sleeping-pills. Orton was cremated at Golders Green on 18 August.

Halliwell's hammer-blows ended Orton's life and established his legend. After seeing Loot the critic Ronald Bryden dubbed its author 'the Oscar Wilde of Welfare State gentility' (Lahr, 268). Although, unlike Wilde, Orton would never have claimed to have put his genius into his life and his talent into his works, he has, like Wilde, threatened to become more celebrated for his life (in particular for his sex life) than for his plays. John Lahr's edition of The Orton Diaries (1986) and his earlier biography, Prick up your Ears (1978), which was adapted by Alan Bennett for the screen in 1987, have combined to create an indelible image of the rough-trade playwright whose private life was largely conducted in public lavatories. Nevertheless, it is as a stylist so unique that he furnished a new critical term, Ortonesque, that he will be remembered. The playwright and critic Frank Marcus put it most pertinently when he wrote of What the Butler Saw 'I think it will survive and tell people more about what it felt to be alive in the sixties than anything else of that period' (Fox, 67).