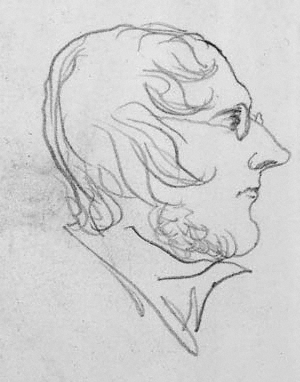 courtesy of the Brontë Society

Branwell was educated at home by his father. Like his sisters, he read widely from an early age, being particularly fond of Blackwood's Magazine, especially the 'Noctes Ambrosianae'. After the deaths of their mother in 1821 and their two eldest sisters in 1825, he and his remaining sisters, stimulated by their reading, began to make up and act out plays. These ‘Young Men’ plays, under the leadership of Charlotte and Branwell, evolved into the complex saga of the imaginary Glasstown confederacy, situated in the Asante country of west Africa.

Brontë's earliest known piece of writing dates from March 1827, but with the production in January 1829 of his Magazine, which quickly became Branwell's Blackwood's Magazine, he revealed his literary aspirations—pre-eminently as poet, but also as dramatist, critic, historian, conversationalist, editor, and publisher—in short as the man of letters he saw exemplified by Christopher North and James Hogg in the 'Noctes Ambrosianae'. Between 1835 and 1842 Brontë wrote six times to Blackwood's, offering his services and samples of his poetry, and in December 1835 putting himself forward to replace the late James Hogg. Most of his hundreds of manuscript pages up to the end of 1837, chronicling events and activities in Glasstown, and later in Angria, were works ‘published’ in Glasstown (later Verdopolis); in 1832 he embarked on the first manuscript volume of his 'collected' poems, to be followed by others in 1835 and 1837. In his competitive/collaborative chronicling of the worlds of Glasstown and Angria with Charlotte, Brontë's particular interest lay in the politics, civil wars, and military campaigns that led to the emergence of Arthur Wellesley, Marquis of Douro and Duke of Zamorna (Charlotte's hero), and Alexander Percy, earl of Northangerland (Brontë's protagonist); to the creation in 1834 of the kingdom of Angria, with Zamorna as king and Percy as his premier and father-in-law; and to their subsequent self-destructive rivalry.

Meanwhile, and probably as early as 1834, Brontë was also receiving instruction in painting from the portrait painter William Robinson. It was about 1834 that he completed his portrait of the Brontë sisters, having painted over the original representation of himself in the portrait. Although he drafted a letter in 1835 seeking admission to the Royal Academy, recent evidence suggests that the letter was never sent and that Brontë never made the infamous trip to London described by earlier biographers (Barker, 226–31). In July 1838 he set up as a portrait painter in Bradford, but the venture was unsuccessful, and his career as painter came to an end. In the course of it, however, he had made numerous literary and artistic acquaintances, including the sculptor J. B. Leyland and his brother Francis, both of whom remained Brontë's lifelong friends.

In June 1839 Brontë embarked on a review of the classics with his father to prepare for employment as a tutor. On 1 January 1840 he took up a position in the home of Robert Postlethwaite in Broughton in Furness. Proximity to the Lake District inspired a return to literary activity. In April 1840 he sent a long poem and his translations of five of Horace's Odes to Thomas De Quincey at Dove Cottage, Grasmere. Five days later he sent another poem and two translations to Hartley Coleridge at Nab Cottage, Rydal Water, to solicit his opinion on whether it would 'be possible to obtain remuneration for translations … such as these' (Barker, 333). A visit to Nab Cottage on 1 May, at Coleridge's invitation, encouraged Brontë to undertake a complete translation of book I of the Odes, which Coleridge promised to read on completion. Despite his dismissal as tutor, Brontë sent the completed translations to Coleridge in June 1840. Because the translations were of a high quality and would probably have found a ready market (Barker, 336), it is unfortunate that Coleridge never completed the very positive and encouraging reply he began to draft in November–December 1840.

In October 1840 Brontë was employed as assistant clerk-in-charge at Sowerby Bridge on the new Leeds and Manchester Railway, and promoted to clerk-in-charge at Luddenden Foot on 1 April 1841. Contrary to the traditional view of Brontë's dissipation during this employment, the proximity to the literary and artistic circles of Halifax, which included not only the Leyland brothers, but also poets such as William Dearden, John Nicholson, and Thomas Crossley, provided new impetus for literary activity. Within a month of his promotion, Brontë published his first poem, 'Heaven and Earth', in the Halifax Guardian. Despite being dismissed from his railway post in March 1842 because of a discrepancy in the accounts for which he was held responsible, though not suspected of theft or fraud, by the end of 1842 Brontë published seven further poems and an article on Thomas Bewick in The Guardian, eight in the Bradford Herald (six of which appeared simultaneously in The Guardian), and one in the Leeds Intelligencer, all but one under the pseudonym ‘Northangerland’. Publication in The Guardian was no mean achievement; the paper was proud of the original poetry it featured and the high standards it set. Brontë also tried Blackwell's once more, unsuccessfully, and sent lines to Caroline Bowles, James and Harriet Martineau, and Leigh Hunt for criticism and advice.

Employed as tutor with the Robinsons at Thorp Green, near York, from January 1843 to July 1845, Brontë continued to write, publishing two more poems in The Guardian in 1845, four in the Yorkshire Gazette (one a repeat from the Bradford Herald), and commencing work on a novel, never completed.

After his dismissal from Thorp Green because of an affair with Mrs Robinson, and the subsequent realization in 1846, on the death of her husband, that she had no intention of marrying him, Brontë declined into chronic alcoholism, opiates, and debt. His behaviour after his dismissal from Thorp Green caused the family much distress, embarrassment, and on the part of Charlotte, bitterness over talent wasted (Barker, 568–9). Yet even in his decline Brontë published two further poems in The Guardian, in 1846 and 1847 respectively. He died at Haworth parsonage on 24 September 1848, most likely of tuberculosis aggravated by delirium tremens (Barker, 564, 569), although his death certificate gives the cause as 'chronic bronchitis-marasmus'. He was buried in the family vault on 28 September, having much more nearly realized his literary aspirations than has been traditionally acknowledged.