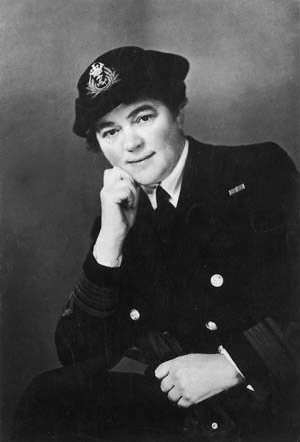 Mathews, Dame Elvira Sibyl Maria [Vera] Laughton (1888–1959), director of the Women's Royal Naval Service, was born at 130 Sinclair Road, Hammersmith, Middlesex, on 25 September 1888, the daughter of Sir John Knox Laughton (1830–1915), naval instructor, and his second wife, Maria Josepha di Alberti (d. 1950). She was educated at the convents of the Religious of St Andrew, Streatham, then (like her mother) at Tournai, and then at King's College, London.

As a girl, Vera Laughton joined the militant Women's Social and Political Union, and women's rights remained an important thread of her life thereafter. She joined the Catholic Women's Suffrage Society (later the St Joan's Social and Political Alliance) at or soon after its foundation in 1911 and nearly fifty years later presided over the St Joan international meeting at Geneva in summer 1959. She employed her journalistic skills, first as sub-editor of The Suffragette, working in London and Glasgow, and in 1914 as acting editor.

In the early part of the war Laughton applied to work at the Admiralty, only to be told that no women were allowed; she then moved to sub-edit a journal, the Ladies Field. When the Women's Royal Naval Service (WRNS) was formed in 1917 she hastened to join it, and after an officer's course, went as WRNS unit officer to HMS Victory VI, a naval training depot at Crystal Palace. There she kept a happy ship, inspiring her crew with confidence to tackle the daunting tasks now for the first time imposed on service women. She was also public-spirited, active in legislative reforms and arranging lectures on matters of public interest. A keen sportswoman herself, she encouraged and promoted all kinds of inter-service sports during and after the war.

Laughton was appointed MBE when the WRNS unit was disbanded in 1919. After demobilization she published a booklet entitled The Wrens: a Story of their Beginnings and Doings in Different Parts. She was active in the Association of Wrens, and as its first vice-president founded and edited its magazine, The Wren, from February 1921. She also launched Time and Tide, bringing out its first number in May 1920. In 1921 she sat on the committee of the International Women's Franchise Club, which supported women's emancipation. She was the first captain of the Sea Ranger ship Wren, being enrolled with her company by Lady Baden-Powell in July 1922.

These activities were inevitably curtailed when Laughton sailed to Japan to marry in the Roman Catholic church in Kobe on 10 June 1924 (and then in a civil ceremony at the British consulate). Her husband was Ernest Gordon Dewar Mathews (1880/81–1943), an engineer. Their first child, Elvira, was born in Japan; two sons followed after their return to London. In Japan, Mrs Laughton Mathews, as she became known, acquired some knowledge of Japanese language and culture; she was also appointed commissioner for British guides in Japan, running her own company and travelling extensively to attend rallies.

The family returned to Britain in 1927, settling at 57 Carlton Hill, Maida Vale, London. Laughton Mathews resumed her concern with women's rights, compiling with Phyllis Challoner Towards Citizenship: a Handbook of Women's Emancipation (1928). Her work with the guides and rangers expanded as she became a division commissioner, then, in 1930, district commissioner for Camberwell. In 1928 she became captain of the Sea Ranger ship Golden Hind, a responsibility she held until 1939. Every year she took the Sea Rangers of the Golden Hind, together with her husband and children, to camp, often abroad. While chairman from 1932 to 1939 of the St Joan's Social and Political Alliance she gave evidence on their behalf before the select committee of the House of Lords on the age of marriage, urging that it should be raised to sixteen for boys and girls. She was active in many other organizations working for the benefit of society in general and for women and young people in particular.

With the re-formation of the WRNS in 1939 Laughton Mathews was appointed director, with Ethel Goodenough as her deputy. During her service she travelled to virtually every establishment where Wrens were posted. The CBE was conferred on her in 1942, the DBE in 1945. Dame Vera, as she became, won great acclaim within the Admiralty, in parliament, and among her own Wrens for the humanity and common sense with which she led her force. After the war she worked to forge the Wrens into a permanent service, retiring in 1947.

Dame Vera's capabilities were immediately called on by the post-war government; she was appointed chairman of the Domestic Coal Consumers' Council set up when the coal industry was nationalized; and when the gas industry was nationalized she sat on the South Eastern Gas Board, the first woman in gas management in Britain, a post she held until shortly before her death. These positions led to her service on various subsidiary bodies dealing with the consumption of domestic fuels. Dame Vera's last public act was to preside at the lord chancellor's unveiling of the memorial to Christabel Pankhurst in July 1959. She died at her home, 14A Ashley Gardens, London, on 25 September 1959.