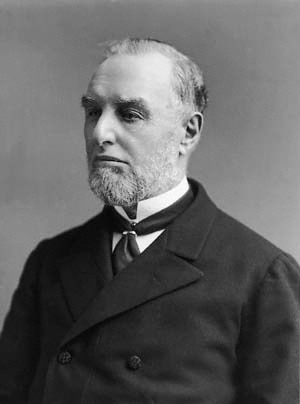 Mappin, Sir Frederick Thorpe, first baronet (1821–1910), industrialist and politician, was born on 16 May 1821 in Sheffield, the eldest of the four sons of Joseph Mappin (1793–1841), cutlery manufacturer, and his wife, Mary, the daughter of Thomas Thorpe of Haynes, Bedfordshire, a land surveyor. He was educated at Mr Wright's school, Sheffield, and at the age of thirteen joined the family firm, taking charge of it on his father's death. On 25 September 1845 he married Mary (d. 1908), daughter of John Wilson, a steel manufacturer, of Oak Holme, Sheffield; they had three sons.

Under Mappin's guidance, the firm which became Mappin Bros. rose to the forefront of the Sheffield cutlery trades. It grew from about a hundred workers to five hundred, acquired London's largest cutlery warehouse, and developed an extensive export trade, partly through Mappin's own vigorous salesmanship abroad. In 1855 he became Sheffield's youngest master cutler. His success owed much to his ability to supply high-quality goods to an increasingly affluent Victorian domestic market. Following a partnership dispute, he left the firm in 1859, but it would in 1903 form part of Mappin and Webb, the London business set up by his youngest brother, John Newton Mappin (1836–1913).

After his departure Mappin directed his entrepreneurial energies towards the heavy steel industry, in 1860 purchasing Thomas Turton & Son, a top-quality steel manufacturer but also owners of William Greaves & Co., the pre-eminent file and edge toolmakers in Sheffield. Under Mappin, Turtons now led the mechanization of Sheffield's cutlery trades, but its introduction of the first grinding machine for file-cutting in 1865 precipitated a major strike, at a time when Sheffield's industrial relations were deeply embittered by the challenge to its well-organized handicraft trades. In this particular contest over files, the employers broke union resistance, but the pace of technological change was by no means rapid and Turtons continued to employ much hand labour into the 1890s. Mappin also turned Turtons into the leading manufacturers of railway springs, distributed from its depots in London, Paris, and New York. Appropriately, he became a director of the Midland Railway in 1869, a position he held until 1903. In 1886 Turtons was converted into a private limited company, with Mappin as chairman (until his death), but he now retired from an active managerial role in favour of two of his sons, Frank Mappin (1846–1920) and Wilson Mappin (1848–1925); his other child, Samuel Mappin (1854–1942), became a gentleman farmer in Lincolnshire.

After 1886 Mappin's keenest business interest lay in the Sheffield Gas and Light Company, of which he had become a director in 1863 and was chairman from 1873 until 1908. Under him it became the second-largest provincial gas undertaking, paid the maximum permitted dividends, and produced the cheapest gas in Britain. This, Mappin believed, was a fundamental public benefit for Sheffield, leaving him a confident advocate of enlightened private enterprise against the rising tide of municipal trading.

Mappin's strong belief in the duties of wealth also made him 'benefactor to Sheffield' (DNB) in many other ways. Above all, he was the leading advocate of technical education in Sheffield, a vital necessity if its industry was successfully to keep pace with growing German and American competition. He was largely responsible for the creation of the Sheffield Technical School in 1884. He also supported generously Firth and University colleges, which together became the University of Sheffield in 1905; he was among its charter pro-chancellors and was commemorated in its Mappin Hall in 1911. Mappin served on Sheffield town council (1854–7 and 1876–83), acting as mayor in 1877–8 but retiring disillusioned by the lack of vision of his colleagues, whom he regarded as small-minded men of little experience. He was also a long-serving member of Sheffield's important town trust, playing an instrumental role in its taking over the town's botanic gardens. Besides such civic duties, Mappin was a benevolent practitioner of voluntary action, building a coffee house, supporting churches of several denominations (having abandoned Congregationalism for the Church of England), and, to the lasting cultural benefit of Sheffield, establishing, under the will of his uncle, the brewer J. N. Mappin (1800–1883), the Mappin Art Gallery, to which he gave numerous paintings from his own extensive modern collection. In 1900 his contribution to the welfare of the city of Sheffield was aptly marked by the granting of its freedom. He was also justice of the peace and deputy lieutenant for the West Riding of Yorkshire, a captain in the volunteers, and in 1878 had been awarded the Légion d'honneur as a juror at the Paris Universal Exhibition.

Mappin's local prominence led naturally to an important part in Sheffield politics, as president of both the Sheffield United and Hallamshire Liberal associations. He entered parliament as MP for East Retford in 1880 and sat for the Hallamshire division of the West Riding between 1885 and 1905. An infrequent speaker, he proved a loyal Gladstonian, backing home rule for Ireland and gaining a baronetcy on 27 August 1886. He contributed regularly, if with growing reluctance, to party funds. But he looked with disfavour upon labour representation, purportedly urging at Attercliffe in 1894 that 'we are almost as much giving up the seat if a working man is elected as if a Tory was' (Brown, 56). He also alienated many file-cutters by his failure to support their campaign for the marking of machine-made files, but the miners of south Yorkshire remained his loyal supporters until he retired from parliament in 1905.

Mappin died at his home, Thornbury, Fulwood Road, Sheffield, on 19 March 1910 and was buried on 23 March at Ecclesall cemetery in Sheffield; his wife had died on 10 April 1908. He was succeeded, as second baronet, by his eldest son, Frank Mappin. Sir Frederick left an estate of almost £1 million, a considerable fortune by the standard of his industrial peers and in the light of his substantial philanthropic and political donations. He may be regarded as typical of a generation of energetic, masterful businessmen, supremely confident in their own abilities, who did so much to shape the economic, political, and cultural identity of late Victorian provincial England.