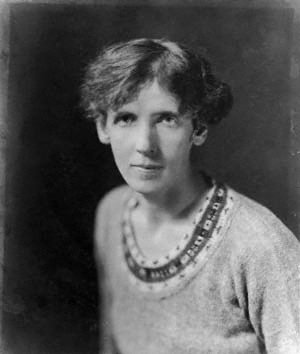 Macaulay, Dame (Emilie) Rose (1881–1958), author, was born at Rugby on 1 August 1881, the second of the seven children of George Campbell Macaulay (1852–1915), assistant master at Rugby School, and his wife, Grace Mary Conybeare (1855–1925), daughter of the Revd William John Conybeare. Among her Macaulay antecedents was the historian T. B. Macaulay, a first cousin of her paternal grandfather. For seven years of her childhood her family lived at the seaside town of Varazze, near Genoa—a time of great happiness for her—and she received her early education mostly from her parents. As a child, she was a tomboy who believed she would grow to be a man, a gender ambiguity which pervades her later fiction. After the Macaulays returned to England in 1894, she attended the Oxford high school. In 1900, with financial assistance from her uncle and godfather, Reginald Macaulay, she went to Somerville College, Oxford, where she read modern history and acquired a lasting interest in the seventeenth century. She was awarded an aegrotat in 1903. University life stimulated Macaulay's independence and she lost the intense shyness from which she had suffered since her return from Italy.

While Macaulay was at Somerville her family moved to Aberystwyth in Wales, but in 1905 her father was appointed lecturer in English at Cambridge University, and from the following year the family lived at Great Shelford, Cambridgeshire. Her early poems were published in the Westminster Gazette, and her first novel, Abbots Verney, appeared in 1906. By 1914 she had written six more novels. Her early fiction was sombre, concerned with a woman's life at home and its problems; it incorporated themes of loss and isolation from society, yet was combined with a witty, aphoristic style. She did not reach public notice as a novelist until The Lee Shore was awarded first prize in a Hodder and Stoughton novel competition in 1912. Its success, together with the £600 prize-money and, once more, the generosity of her uncle, enabled her to leave home and buy her own flat in London.

Once settled in her flat in Southampton Buildings, off Chancery Lane, she began to move in literary circles. In 1914 she published The Making of a Bigot, a comic novel, and The Two Blind Countries, a collection of poems; these were followed in 1919 by Three Days, another volume of poetry. During the First World War she worked as a nurse and a land girl until 1916, when she became a civil servant in the War Office, with responsibilities for exemptions from service and conscientious objectors. At the War Office she met Gerald O'Donovan (1871–1942) in February 1918, a novelist ten years her senior, with whom she formed a close friendship. O'Donovan was already married and had children, and Macaulay's religious convictions and moral scruples made her reluctant to begin a relationship with him but, nevertheless, two years into their friendship, they became lovers, and she ceased taking communion in the Anglican church. O'Donovan never left his family, but Macaulay's relationship with him lasted until his death.

After the war Macaulay worked as a publisher's reader for Constable, and it was in the twenties, the middle period of her fiction, that her talent as a novelist flowered. Her gentle irony, effervescent wit, fastidious turn of phrase, and lightness of touch in exposing the absurdities of the day won for her a large, varied, and enthusiastic public. Potterism (1920) was her first best-seller, followed by Dangerous Ages (1921), which was awarded the Femina Vie Heureuse prize. In 1921 she rather self-consciously entered the Bloomsbury circle, forming a—sometimes strained—friendship with Virginia Woolf. Her popularity continued with Told by an Idiot (1923), a family history outlining shifts in social, religious, and political thought over the previous forty years. It drew comparisons with Woolf's Orlando. Orphan Island (1924), Crewe Train (1926), and Keeping Up Appearances (1928), all written in a vein of detached amusement at the follies of the human race, also sold well. At this time she was also writing many lively articles for the daily press, as well as books of essays with a more learned flavour: A Casual Commentary (1925) was followed by Catchwords and Claptrap (1926), which reflected the pleasure she derived from the English language and her insistence on verbal precision.

In 1934 Macaulay published a biography of Milton, described as 'refreshing and informed', and during the thirties she became increasingly absorbed in the seventeenth century, her specialist area of study from her time at Somerville College. The result of her prolonged meditation on the period was They Were Defeated (1932), her only historical novel, centring upon the poet Robert Herrick, and her own favourite among her books. In it she considers the position of the woman writer through her heroine Julian, a promising poet defeated by social pressures. She deliberately restricted the characters' vocabulary to the words known to have existed at that period, yet her dialogue remained fluent and credible. This novel, and her brief, scholarly study Some Religious Elements in English Literature (1931), initiated a new stage in her writing, one having a decidedly more academic emphasis. Her anthology of prose and verse, The Minor Pleasures of Life, was published in 1934, as was her novel Going Abroad. In 1935 she began writing a weekly column, 'Marginal comments', for The Spectator and also published her best volume of essays, Personal Pleasures. A book of literary criticism, The Writings of E. M. Forster, was published in 1938. In 1932 Q. D. Leavis had described Macaulay's books as upper-middlebrow best-sellers, 'to be found on the shelves of dons, the superior type of schoolmaster (the other type has Kipling, Ian Hay and P. G. Wodehouse), and in the average well-to-do home' (Leavis, 37). By the end of the thirties, however, her work had gained greater prestige.

During the Second World War, Macaulay wrote little. For nearly three years she served as a voluntary part-time ambulance driver in London and her life was disrupted by the loss of all her belongings when her flat was bombed. In 1941 O'Donovan was diagnosed as suffering from terminal cancer and given six months to live. Macaulay's distress at watching him die was heightened by the necessary secrecy of their relationship, which meant she was unable to express anything more than a friend's concern for his welfare. In her grief after his death in 1942, she became ill and depressed and was supported by her friend Rosamond Lehmann. Though she continued writing for periodicals, she published no books during the war years. In 1946 They Went to Portugal, followed by Fabled Shore (1949), established Macaulay as a writer on travel and travel history, a field she continued to explore in Pleasure of Ruins (1953). Throughout her life she delighted in foreign countries and was especially fond of the Mediterranean region.

After the war Macaulay discovered that her name had been on the German list of writers to be exterminated after the Nazi invasion of Britain. Although in earlier life she had called herself a 'High Church Agnostic', she began to correspond with a distant cousin, the Revd J. H. C. Johnson, and in 1950 re-entered the Church of England after a long estrangement. Two volumes of her letters to Johnson were published after her death as Letters to a Friend (1961) and Last Letters to a Friend (1962). Prior to her correspondence with Johnson she had resumed writing fiction with The World my Wilderness (1950), which showed that new depths of pity had transmuted her satirical approach. A revivified understanding of the human heart was even more evident in her final brilliant novel, The Towers of Trebizond (1956), which was awarded the James Tait Black memorial prize. Partly inspired by her trip to Turkey in 1954, it was a picaresque compendium of her interests. The narrator, Laurie, unhappily estranged from the church owing to an adulterous relationship, describes her aunt Dot's eccentric attempts to liberate Muslim women in Turkey into high Anglicanism. John Betjeman described it as 'the best book she has written and that is saying a lot', and it was a literary sensation, a best-seller in both Britain and the United States. The Towers of Trebizond brought Macaulay celebrity status: to her great amusement, she was invited to dine at Buckingham Palace with Queen Elizabeth, the duke of Edinburgh, and Princess Margaret, on its account.

During Macaulay's last years she wrote prolifically for periodicals such as the Times Literary Supplement, The Spectator, the New Statesman, The Observer, and The Listener. In 1951 Cambridge University conferred an honorary LittD upon her and in 1958 she was made a DBE by Harold Macmillan. She died suddenly of a heart attack at her home, 20 Hinde House, Hinde Street, London, on 30 October 1958. Letters to a Sister, a selection of letters to her sister Jean, accompanied by a fragment of Venice Besieged, the novel she was working on when she died, was published posthumously in 1964.