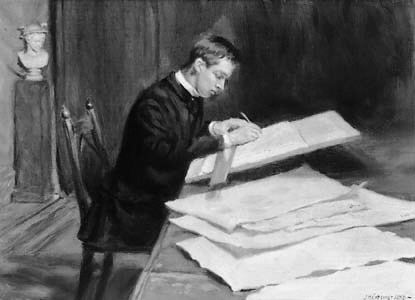 Lorimer, Sir Robert Stodart (1864–1929), architect, was born at 21 Hill Street, Edinburgh, on 4 November 1864, the third and youngest son of James Lorimer (1818–1890), regius professor of public law at Edinburgh University, and his wife, Hannah (1835–1916), daughter of James Riddell Stodart, writer to the signet. His brother John Henry Lorimer achieved note as a genre and portrait painter. J. R. Stodart's father, Robert, was a piano maker, who in 1777 patented the first British grand action, and it was from his maternal side that Lorimer inherited his lifelong passion for music. He first showed enthusiasm for architecture, and for the company of craftsmen, when his father leased and repaired the castle of Kellie, Fife, as a weekend residence in 1878. Educated at Edinburgh Academy and Edinburgh University, he left the latter in 1884 without graduating to enter the office of Robert Rowand Anderson and Hew Montgomerie Wardrop (1856–1887). He stayed there four and a half years. In 1889 he left for London, where he made the acquaintance of John James Stevenson, James Marjoribanks MacLaren, and, slightly later, Richard Norman Shaw. He obtained a place in the office of George Frederick Bodley, who encouraged his love of fine craftsmanship. After a year he moved to the office of MacLaren's successors, William Dunn and Robert Watson, working on the tactful remodelling and extension of the ancient house of Glenlyon and on the associated hotel and village of Fortingal, Perthshire. The subtle synthesis of Scottish and English vernacular traditions created by MacLaren, Dunn, and Watson had a profound influence on Lorimer, who developed the theme from 1893 onwards in a remarkable series of roughcast medium-sized houses and cottages built in Colinton, in Midlothian, North Berwick and Gullane, both East Lothian, and elsewhere; the finest example was built at Wayside, St Andrews, Fife, in 1901. These buildings paralleled the work of William Richard Lethaby and Charles Voysey, with whom Lorimer had become more closely associated through election to the Art-Workers' Guild in 1897.

Lorimer's return to Edinburgh in 1892 had, however, been primarily to restore the dilapidated sixteenth-century house and garden of Earlshall, Fife (1892–1900), for a friend of his father's, R. W. Mackenzie. In it he applied the same principles as his father had done at Kellie, respecting what existed and avoiding additions as far as practicable. He also designed for Earlshall some very fine marquetry furniture. In 1894 he reconstructed St Marnock's, Dublin, as a handsome house in a symmetrical seventeenth-century style. These led to many commissions for tactful restoration and sympathetic extension later, most notably at Pitkerro, Forfarshire, Craigmyle, Aberdeenshire, and Barton Hartshorn, Buckinghamshire (all 1902), Lympne Castle, Kent (1907), Dunderave, Argyll (1911), and Balmanno, Perthshire (1921); the two last were the finest of the series.

Lorimer's earliest commissions for large houses built completely anew were commuter-belt country houses in England. They included Whinfold, Hascombe, Surrey (1899), the early Lutyens-like High Barn, Godalming, Surrey (1901), and the arts and crafts brick-and-tile Weaponess House, Scarborough, Yorkshire (1902). The largest house he ever built, the rambling neo-Jacobean Brackenburgh, Penrith, Cumberland, a true country house, followed in 1901, and challenged comparison with the very best work of his English contemporaries. Lorimer's first comparable commission in Scotland came in 1903 with Rowallan, Ayrshire, a large house in Scottish sixteenth-century style for Cameron Corbett (Lord Rowallan), which drew themes from the ruined Auchans House near by. The project was curtailed after the death of Corbett's wife, Alice, which resulted in problems with the building which were perhaps never fully resolved. The commission for Ardkinglas, Argyll, for Sir Andrew Noble, followed in 1906, and in it the picturesque but compact style of Lorimer's best medium-sized houses was applied to a really large one. Both these houses were built of carefully crafted rubble, rather self-consciously arts and crafts, but at Briglands, Kinross-shire, where his large addition of 1898 was extended to the scale of a great house for Lord Clyde in 1908, a roughcast treatment was adopted. By far the most successful example of his great houses was the stone-slated Formakin, Renfrewshire (1912–14), 'the purest Scotch I've ever done' (letter to R. S. Dods, Savage, Edinburgh Craft Designers, 115), for the collector John A. Holms, in which the ideas behind his unbuilt house for the shipowner Sir William Burrell were more than realized. With its gate lodges, great garden, tower-house-like bothy, farm court, and mill, it is a place of extraordinary magic in which the visitor is left wondering what is old and what is new, when only the farmhouse is ancient. Similar qualities on a much smaller scale were achieved at Laverockdale, Colinton, in 1912.

Although not by temperament a classicist, Lorimer was a successful designer in a late Stuart, early Georgian manner. In 1907–9 he built the Carnegie Library at the University of St Andrews, the only major public commission of his earlier years, and Hill of Tarvit, Fife (1907), a symmetrically fronted house for the collector F. B. Sharp. The Scottish dormered mid-seventeenth-century form originally proposed for that house was subsequently adopted, with asymmetrical elements in the composition, at Woodhill, Forfarshire, and the granite Rhu-na-Haven, Aberdeenshire (both 1908). In the internal remodelling of the great mid-Georgian pile of Galloway House, Wigtownshire (1909), Lorimer achieved a confident early Georgian style not easily distinguished from original work. Similar qualities are to be found in his more extensive remodelling of Midfield, Midlothian, and his finest work in that idiom, the reconstruction of the mid-eighteenth-century Marchmont, Berwickshire, for R. F. McEwan (both 1914–15). Another major remodelling, though in a neo-Jacobean idiom, was the restoration after a fire of the interior of Sir Charles Barry's Dunrobin Castle, Sutherland, for the duke of Sutherland (from 1915).

All Lorimer's larger houses were remarkable for the craftsmanship of their interiors, with rich plasterwork modelled by Thomas Beattie and Sam Wilson, stonecarving by Joseph Hayes, and wrought-iron work by Thomas Hadden. For several he designed superb furniture, often to complement the collections of his clients. His gardens, which were designed with just as much care, were influenced by his friendship with Gertrude Jekyll from 1901 onwards, although only at Whinfold, Surrey, and Barton Hartshorne, Buckinghamshire, was she directly involved. His work attracted a great deal of contemporary attention, notably from Hermann Muthesius (in Das englische Haus, translated as The English House, ed. D. Sharp, 1979) and in Country Life.

Lorimer's career as an ecclesiastical architect was at first slow to develop, despite his early success with the church of the Good Shepherd, Edinburgh (1897), which owed more to J. D. Sedding and Harry Wilson than to Bodley. Subsequent commissions were mainly for high-quality woodwork within existing churches, but in 1909 he replaced Thomas Ross as architect of the Thistle Chapel at St Giles's Cathedral, Edinburgh. The chapel is very much in Bodley's manner—tall, slim, and apsed externally with boldly stepped basecourses, and vaulted within. The rich stallwork was executed by Nathaniel Grieve and the brothers W. Clow and A. Clow, working from maquettes by Louis Deuchars. The chapel was a most remarkable revival of medieval crafts. It brought Lorimer a knighthood in 1911 and established his reputation for restoring and refurnishing medieval churches. In 1912 he furnished the choir at Dunblane Cathedral, Perthshire, disregarding the surviving medieval stalls in favour of a richer scheme; in 1915 he was entrusted with the restoration of the burnt-out Whitekirk, East Lothian, and in 1923 with the reinstatement of the divided St John's Church in Perth, and the completion of the choir and tower at Paisley Abbey, Renfrewshire. In his new-build churches he tended to adopt a simpler idiom, most notably at the large red tile-roofed Italianate St Peter's, Edinburgh, for André Raffalowich and Canon John Gray (1906), and at the brick St Andrew's, Aldershot, Hampshire (1926), with a ‘pencil’ tower of early Scots-Irish type.

Lorimer's absorbing occupation between 1918 and 1927 was the Scottish national war memorial, for whose construction his whole development had prepared him. His first scheme (1919) was for a gothic memorial cloister attached by a low passage to a lofty octagonal shrine crowning the highest point of Edinburgh Castle Rock. This cloister was subsequently (1922) redesigned as a 'hall of the regiments'. But J. S. Richardson, the principal inspector of ancient monuments and a disaffected former assistant of Lorimer's, had a canvas montage built to demonstrate the effect of the shrine on the profile of the castle; and, although Lorimer's scheme was robustly defended by Sir John Burnet, public protest at alteration of the familiar skyline resulted in a complete redesign. The barrack block on the site was recast as the hall, and the shrine reduced to a lower apse. The details are in a very personal, rugged late Scottish gothic with some early Renaissance elements within, and draw inspiration from James V's palace block at Stirling. It was a commission which suffered from having to take account of too much advice, but the craftsmanship was superb, and the concept of the shrine with its suspended figure of St Michael fulfilled the emotional requirements of a national war memorial. The response was popular and immediate. In 1928 Lorimer was made KBE. In parallel with the national war memorial, Lorimer designed a great many local memorials, notably those at Paisley and Galashiels, Selkirkshire, and the naval war memorials at Chatham, Portsmouth, and Plymouth. He also carried out a great deal of good work for the Imperial War Graves Commission in Italy, Germany, Egypt, and Macedonia, although at none of these was he asked to design on a truly monumental scale.

Until 1913 Lorimer had tended to avoid public and commercial buildings, as he disliked being rushed and the fluctuating demand on staff resources. But in that year he was asked to prepare sketch designs for the proposed Scottish Office buildings on Calton Hill, Edinburgh. To his bitter disappointment he was not recommissioned when the project was revived in 1928. But with his first apprentice—by then his partner, John Fraser Matthew (1875–1955)—he designed the University of Edinburgh zoology and animal genetics blocks at King's Buildings, the former austere classical modern, the latter in a more characteristic style (1927–30). The best works of his later years were the classical chapel at Stowe School, Buckinghamshire (1927–8), for the interior of which the Temple of Concord was robbed of its columns, and the Scandinavian gothic St Margaret's Knightswood, Glasgow (1929–30).

On 2 October 1903 Lorimer married Alicia Violet (1875–1940), daughter of Edward Wyld of Denham, Buckinghamshire, with whom he had three sons and a daughter. In the same year he was elected ARSA. Election to ARA followed in 1920, and RSA in 1921. In appearance he was handsome and alert, with large keen eyes of grey-blue. His strength as an architect lay in an obstinate idealism, an instinctive perception of the elements on which the character and psychological effect of a design depended, and his love of fine craftsmanship. Nearly all his work has a lyrical quality, but a very few of his designs are overworked, sometimes from a reluctance to discard designs with which he was dissatisfied and start afresh, sometimes from being called upon to alter and extend what was already as good as it could be. When his plans for his own country house at Auchentrail, Fife, proved unrealizable, he bought and adapted a good late Georgian one nearby at Gibliston.

Lorimer died suddenly following an operation for appendicitis on 13 September 1929 in Edinburgh. His body was cremated and the ashes buried in the family burial-ground at Newburn, Fife. Of Lorimer's sons, Hew became a pupil of Eric Gill and was a distinguished sculptor. An almost complete archive of Lorimer's drawings is held by the Royal Commission on the Ancient and Historical Monuments of Scotland, Edinburgh.