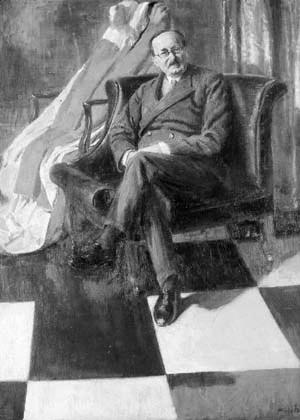 Horder, Thomas Jeeves, first Baron Horder (1871–1955), physician, was born on 7 January 1871 in Shaftesbury, Dorset, the fourth and youngest child of Albert Horder, a successful draper and businessman, who had married one of his assistants, Ellen Jeeves. Two years after his birth the family moved to Swindon, where Horder was later educated at the high school and quickly showed himself an exceptional pupil. At the age of fifteen he was thought to have a chest complaint and spent two years working on his uncles' farms on the Wiltshire downs. After his return home, he passed the matriculation examination of London University. He had still no idea what he wanted to do in life, except that he did not wish to enter the drapery business; it was the family doctor who suggested he take up medicine.

Horder took a correspondence course in biology with a tutorial college in Red Lion Square, London, where his papers were corrected by H. G. Wells, who is said to have noted on them that Horder was not cut out for research. Wells was later to be one of his patients. In 1891 Horder obtained an entrance scholarship to St Bartholomew's Hospital, and he was awarded the junior and senior scholarships in anatomy and physiology in 1892 and 1893. He graduated BSc from London University in 1893 with second-class honours in physiology, and qualified in medicine in 1896; he went on to obtain the degree of MB, BS with first-class honours and gold medals in medicine, midwifery, and forensic medicine in 1898, and MD in 1899. He became a member of the Royal College of Physicians in 1899 and a fellow in 1906.

Horder's resident hospital experience began with his appointment as a house physician to Samuel Gee at St Bartholomew's. Gee was a gifted physician whose teaching was founded on observation and deduction at the bedside and regular attendance at the post-mortem room. He made a great impression on Horder, who published 'Clinical aphorisms from Dr. Gee's wards (1895–6)' in St. Bartholomew's Hospital Reports in 1896. Up to this time Horder had been uncertain whether his future lay in biology, physiology, or medicine, and it was from Gee that he learned the fascination of the art of medical diagnosis which was to be the mainspring of his career. Horder subsequently held a number of junior appointments at St Bartholomew's and at the Hospital for Sick Children, Great Ormond Street; he was demonstrator of practical pathology at St Bartholomew's in 1903 and medical registrar and demonstrator of morbid anatomy in 1904–11; he also became a member of the staff of the Royal Northern Hospital, Islington.

In later life Horder said that the three great advances of medicine in his lifetime were the integration of morbid anatomy with clinical medicine, the development of laboratory methods and the birth of clinical pathology, and the arrival of X-rays. The combination of observation at the bedside with special investigations in the laboratory was the foundation of Horder's success. When accused of forsaking the bench for the bedside, he replied: 'No, I took the bench to the bedside.' This was true, and people soon began to talk about Horder's box, with its syringes and needles for venous and lumbar puncture, its tubes of broth and agar for preparing cultures at the bedside, its stains, cover-glasses, and folding microscope. In much of his work he was closely associated with the brilliant pathologist and scientist Mervyn Gordon; and while Horder himself never became a research worker, together they greatly advanced the existing knowledge of cerebrospinal fever, acute rheumatism, and infective endocarditis.

Horder began making a name for himself in the early years of the twentieth century, and while still a registrar at St Bartholomew's he was able to afford a Rolls-Royce which he discreetly parked a few streets away from the hospital. His success was not altogether palatable to some of his senior colleagues, who did not like his background or his new outlook on medicine, and at times writhed under his criticism. His chance came when he was called in consultation to see Edward VII and by astute observation was able to make the correct diagnosis. 'They can hardly fail to take me now,' he said to a friend. In 1912 he was appointed assistant physician at St Bartholomew's; he became a senior physician in 1921 and retired under the age limit in 1936. He was made honorary consultant physician to the Ministry of Pensions (1939) and medical adviser to London Transport (1940–55). He was the outstanding clinician of his time and one of the personalities in medicine best known to the British public. His patients included George V, George VI, Elizabeth II, Bonar Law, and Ramsay MacDonald.

Horder was short and compact in build and his chief qualities have been described as sagacity, audacity, and humanity. The impression he gave in consultation or in committee was of organized common sense. He had the faculty of seeing the relevant facts in a clinical situation, arranging them in perspective, and comparing them with the previous data in his well-stored memory so as to arrive at the correct diagnosis. His help was widely sought in committee work and he was chairman of the Ministry of Health advisory committee (1935–9), chairman of the committee on the use of public air-raid shelters (1940), and medical adviser to Lord Woolton at the Ministry of Food (1941). He was chairman of the scientific advisory committee of the British Empire Cancer Campaign for approximately thirty years, and chairman of its grand council from 1950 to 1955. He was chairman of the Empire Rheumatism Council from its beginning in 1936 until 1953. Others of his numerous interests were the Noise Abatement League, the Family Planning Association, the Cremation Society, and the National Book League.

In his teaching Horder emphasized observation, precision, and logic. He used to say that the best book to read in medicine was the Primer of Logic by W. S. Jevons. Most of what he wrote was the current coin of medical literature, but his book, Fifty Years of Medicine (1953), which was an expanded version of his Harben lectures delivered in 1952, may still be read with pleasure, as may his occasional addresses, Health and a Day (1937). Horder was a rationalist who believed in the possibility of solving human problems by science, education, and reform, and he was not afraid to do battle for his beliefs. Characteristically, the title he chose for his Conway memorial lecture in 1938 was 'Obscurantism'. He was an individualist who disliked many of the features of the National Health Service and he organized the Fellowship for Freedom in Medicine, becoming its first chairman in 1948. His main interests outside medicine and public life were literature and gardening.

Horder was knighted in 1918, created a baronet in 1923, and a baron in 1933. He was appointed KCVO in 1925 and GCVO in 1938; among the honorary degrees he received were a DCL from Durham and the MD from Melbourne and Adelaide. In 1902 he married Geraldine Rose (d. 1954), only daughter of Arthur Doggett, of Newnham Manor, Baldock, Hertfordshire. They had two daughters and one son, Thomas Mervyn (1910–1997), chairman of the publisher Duckworth from 1948 to 1970. He died suddenly at his house, Ashford Chace, Steep, near Petersfield, on 13 August 1955, having been blessed with abundant health and vitality to the end; he was succeeded in his title by his son.