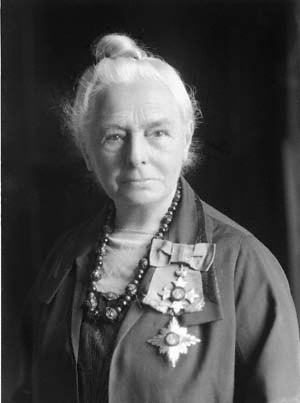 Dove, Dame (Jane) Frances (1847–1942), founder of Wycombe Abbey School, was born at Bordeaux, France, on 27 June 1847, the eldest of the ten children of the Revd John Thomas Dove (1821–1906), vicar of Cowbit, Lincolnshire, for more than forty years, and chairman of the Spalding board of poor-law guardians and of the South Holland magistrates' bench, and his wife, Jane Ding, daughter of Thomas Lawrence of Dunsby, Lincolnshire. Her education began at home in London, where she was taught by her father, with her two brothers. Subsequently she attended Queen's College, Harley Street, for nearly three years. At this time her father was curate to the Revd Llewelyn Davies, rector of Christ Church Marylebone. This association with the Davies family and their acquaintances brought an early exposure to the debate on women's education. At the age of fifteen her formal education was interrupted when her father was appointed to Cowbit, which in 1862 was an isolated fen village. There was little diversion for the Dove children beyond 'watering cabbages'. At her own request, Frances Dove was sent to a boarding-school, which she later described as being 'everything a school should not be' (Bowerman, 15). After a year away she returned home to a much busier life, educating the younger children, making their clothes, and undertaking parish visiting.

In 1871, at the age of twenty-four, Frances Dove was prompted to enter Girton College by news of the new college for women brought from London by her father. She prepared for the entrance examination virtually unaided and, although the aggregate of her marks placed her sixth of the eleven candidates, her performance in the arithmetic paper was outstanding. She was one of the nine students who, with Emily Davies (Llewelyn Davies's sister) as mistress, migrated from Hitchin to Girton in 1873. Her story of Davies's meeting her, the first student to enter the new building, surrounded by builders' debris, passed into college history. She and another member of her year were the first women to sit the natural sciences tripos, and as such were the first to be admitted to university lectures in anatomy, physiology, and chemistry. In 1874 she attained the standard of the ordinary degree; this she was able to convert to an MA in 1905 when Trinity College, Dublin, offered suitably qualified women quasi ad eundem degrees.

While she was still at Girton, Dove was engaged by Miss Beale to teach mathematics and physiology at Cheltenham Ladies' College. Constance Maynard, a contemporary at Girton, called it a 'capital beginning'. Maynard and another Girtonian, Louisa Lumsden, were to follow Frances Dove to Cheltenham, and when in 1877 Lumsden was invited to become the first headmistress of St Andrews School for Girls, Dove and Maynard joined her on the staff. However, their incompatible temperaments made them uneasy colleagues. In 1882, when Louisa Lumsden resigned, Frances Dove was appointed headmistress in her place. It was under her supervision that the school was rehoused in new buildings and changed its name to St Leonards. Her most important task was to establish a tradition of excellence which would outlast the pioneer enthusiasm which had carried the school in its early years. By the time she announced her resignation in 1895 the school had more than doubled in size.

Dove's decision to leave St Andrews to found a sister school in England was, as she later admitted, 'a great venture of faith'. The prospectus of the Girls' Education Company, which she founded in 1896 to raise the necessary finance for the enterprise, stated that, 'The proposed system of education aims at doing for girls, with suitable modifications, what the existing great Public Schools do for boys' (Bowerman, 79). Lord Carrington's house near High Wycombe, Buckinghamshire, was purchased, and Wycombe Abbey School opened in September 1896. Although she never spoke of the school in proprietary terms, it was nevertheless the realization of Frances Dove's educational ideals, brought about largely by her own energy and organizational ability. Starting with forty girls, she built up the numbers to 230, with fifty mistresses, by the time of her retirement in 1910. Her success inspired the foundation of Benenden School in 1923, and made her an important figure in disseminating the model for girls' boarding-schools pioneered at St Leonards.

The underlying principle of Dove's educational thinking was education for citizenship. She set out her philosophy in her essay 'Cultivation of the body' in the volume which she edited with Dorothea Beale and Lucy Soulsby, Work and Play in Girls' Schools (1898). She argued that women should be taught corporate virtues, and that to be good citizens it was essential to have wide interests, a sense of discipline, and esprit de corps. She applied these principles at Wycombe, believing that the best place to instil ideals of citizenship was the school. Like headmasters of boys' public schools, she regarded team games as the best medium for developing character, and introduced cricket, hockey, and lacrosse as compulsory activities. A regime of daily cold baths and unheated dormitories was intended to develop hardiness in the girls; she was comparatively uninterested in their clothes or appearance, though she favoured 'rational dress'. The curriculum at Wycombe included gardening, carpentry, and Swedish gymnastics as well as more conventional academic subjects, though she was suspicious of music, fearing that the emotional nature of girls might be 'overstimulated by excessive time spent on music, especially if the music is of a certain kind' (Cultivation of the body, 55). A devout high-church Anglican, she ensured that the religious life of the school was centred on the parish church at High Wycombe.

Dove regarded the school as a preparation for a life of service. Pupils were expected to become involved in community work through the United Girls' School Mission at Camberwell, and in missionary work abroad by contributing to the Melanesian mission. On her own retirement she devoted her time to public work in High Wycombe. In 1906 she had inaugurated the Central Aid Society in the town, involving welfare work with invalid children and workhouse girls, and infant health. She was a governor of schools and raised funds for church schools. She was a committed suffragist, believing that women could exercise a wholesome influence upon public life. At the first elections open to women candidates for borough and county councils, held in November 1907, she stood for High Wycombe town council, one of the women candidates co-ordinated by the Women's Local Government Society. Staff at Wycombe Abbey School assisted in her campaign, after which she was returned at the top of the poll. Her nomination to the mayoralty in October 1908 appeared to be a formality, but unexpected opposition, stirred up by a reaction against the suffragettes, defeated the motion for her appointment, preventing her from becoming the first woman mayor in England. She lost her council seat in 1913. Thereafter she continued to undertake voluntary work for the diocese and the county education committee, and was made a JP for Buckinghamshire in 1921, learning to drive at an advanced age in order to fulfil her many commitments in the county. She was a member of Girton College council from 1902 to 1924, becoming thereafter a life governor. In January 1928 she was created DBE.

A photograph taken in the year of Wycombe Abbey's foundation shows a youthful-looking Frances Dove with clear dark eyes and upswept white hair in a high-necked, smocked dress. It is a great deal less intimidating a portrait than that painted by Sir William Richmond and presented to her in 1904. There is no doubt that both pupils and peers sometimes found her forbidding. However, just as her spartan lifestyle was tempered by a love of fine art, so those who recalled her indomitable will and autocratic manner remembered an affectionate and generous nature. Frances Dove died, unmarried, at her home, 24 Priory Avenue, High Wycombe, on 21 June 1942.