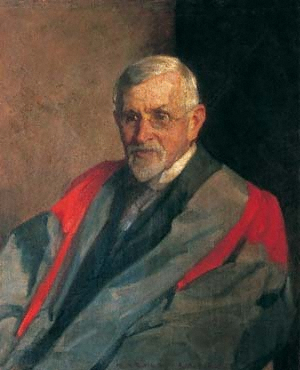 Craigie, Sir William Alexander (1867–1957), lexicographer and philologist, was born in Dundee on 13 August 1867, the youngest son of James Craigie, jobbing gardener, and his wife, Christina Gow. His native speech was thus the lowland Scots of Forfarshire, and during his childhood he learned some Gaelic from his maternal grandfather and later his eldest brother. About the age of twelve he began reading the early Scottish writers. From the headmaster of his school—the West End Academy, Dundee—he gained a knowledge of phonetics. While attending St Andrews University, where he graduated with honours in classics and philosophy in 1888, he also found time to learn German and French, and began studying Danish and Icelandic. In his final session he carried out the research on the university library's manuscript of the early Scots Wyntoun's Chronicle which enabled him to demonstrate conclusively the relationships of the several versions of this work.

With a Guthrie scholarship Craigie proceeded to Balliol College, Oxford, and thence, after one term, to Oriel College as a bible clerk. Apart from the work of his regular curriculum, which led to firsts in both honour moderations (1890) and literae humaniores (1892), he continued his private study of Scandinavian, attended lectures on Celtic, and began producing articles on these subjects for Scottish journals. The winter of 1892–3 he spent in Copenhagen, where he studied Icelandic manuscripts and learned modern Icelandic from Icelandic friends. From 1893 to 1897 he was assistant to the professor of Latin at St Andrews. In his spare time he continued his writing of articles, produced his valuable Primer of Burns (1896), and contributed translations from Icelandic and Danish to the fairy books and Dreams and Ghosts of Andrew Lang as well as his own Scandinavian Folk-Lore (1896).

On 28 June 1897 Craigie married Jessie Kinmond (1864/5–1947), daughter of William Hutchen, tailor and clothier, of Dundee; on her loving care and companionship he depended greatly. They had no children. Also in 1897 Craigie accepted an unexpected invitation to join the staff of the Philological Society's New English Dictionary in Oxford. He was appointed co-editor of the New English Dictionary with James A. H. Murray and Henry Bradley. Thereafter he continued to work on the dictionary until the completion of its supplement in 1933, producing the letters N, Q, R, U, and V, Si–Sq, and Wo–Wy, amounting to nearly a fifth of the main work, and about a third of the supplement.

Along with his daily stint of seven and a half hours of lexicography, which was far from using up all his energy or exhausting his zest for work, Craigie kept alive all his old interests. In 1904 he was appointed Taylorian lecturer in the Scandinavian languages at Oxford, and in 1916 he became Rawlinson and Bosworth professor of Anglo-Saxon. In 1921 he began seriously to collect material for his projected dictionary of Older Scottish, and when in 1925 he moved to the University of Chicago, as professor of English, in order to edit a Dictionary of American English, he was for some years occupied simultaneously with three major dictionaries, yet still turning out a steady flow of other writings.

In 1936 Craigie resigned his Chicago chair and settled at Christmas Common, Watlington, Oxfordshire, on the Chiltern Hills. He now gave most of his time to the Dictionary of the Older Scottish Tongue, which he carried to the end of the letter I in 1955, when he was eighty-seven, before handing over to his successor, A. J. Aitken. He had also continued to contribute to the American dictionary until its completion in 1944. After the war he produced his Specimens of Icelandic Rímur (3 vols., 1952), a masterly survey of a field of Icelandic literature in which his erudition and discernment were unrivalled, and a supplement (1957) to the Icelandic Dictionary of G. Vígfússon.

Craigie's remarkable knowledge of many languages was perfected, and friendships with the scholars of other countries cemented, in the course of the travels on which he and his wife spent all their vacations, visiting all the countries of northern Europe and in 1921 going round the world. In this way he became one of the most widely known of the scholars of his generation, and the quietly dignified, rather reserved, yet unfailingly kindly and companionable personality of this tiny Scotsman, with his modest tastes and tidy habits, and his fellow-feeling for simple folk and small nations, made him one of the best loved. His travels included four visits to Iceland, where he was revered by the whole nation.

Craigie was the ablest and most productive lexicographer of his time, and was universally recognized as the supreme master of the art and techniques of dictionary making. Yet in addition to his major works he contrived also to produce, almost entirely in his spare time, an astonishing number of other, smaller-scale but authoritative writings in many provinces of specialist philology, notably on Older Scottish and on English philology of every period. Over the whole extent of Icelandic literature, ancient and modern, he gained a greater mastery than perhaps any non-Icelander had ever done, and wrote valuably on skaldic verse and on the sagas as well as on his beloved rímur. These writings and others on Frisian and on Gaelic display his characteristic virtues of clarity, brevity, and directness, and his acute and perceptive observation of philological facts and details.

His published work was only part of the vast service Craigie rendered to scholarship. He gave a new impetus to Old Norse and Anglo-Saxon studies in Oxford and later in Chicago. Throughout his career he initiated and encouraged new scholarly enterprises. Out of his plan for 'completing the record of English' by means of the 'period dictionaries', which he launched in 1919, were born the great historical dictionaries which followed the New English, among them his own American and Scottish dictionaries. His lifelong interest in Frisian, and the enthusiastic support which he gave to the Frisian scholars in their attempt to re-establish their language, they recognized by making him one of the two original honorary members of the Frisian Academy on its foundation in 1938. His sponsorship, and the active leadership which he provided in partnership with Professor M. K. Pope, brought about the foundation in 1938 of the Anglo-Norman Text Society, and as its president he fostered this society's project (initiated in 1947) for an Anglo-Norman dictionary. His suggestion and encouragement led likewise to the founding of the Icelandic Rímur Society in 1947. He served for long periods as president or council member of a number of other famous learned societies in England and in Scotland. All his great academic prestige and his extensive range of contacts he placed at the service of these and other good causes of learning.

Craigie possessed an amazingly retentive memory and an ability to grasp at sight the essence of a problem and to marshal facts and arguments with great speed. Even so, his erudition, and his prodigious output, he achieved only by utilizing his time to the utmost, working methodically for most of each day and evening throughout his long life. Yet he was always accessible and ungrudging of his time to others. To the numerous authors of scholarly works who sought it he gave encouragement, fruitful advice, and abundant practical help.

The many honours awarded Craigie included honorary degrees from St Andrews (1907), Calcutta (1921), Oxford (1928), Cambridge (1928), Michigan (1929), Wisconsin (1932), and Iceland (1946); a knighthood in 1928 on completion of the New English Dictionary; an honorary fellowship of Oriel in the same year; and a fellowship of the British Academy in 1931. The Icelanders' appreciation of his friendship and his service to their literature was shown in many different ways, including a knighthood (1925) and a knight-commandership (1930) of the order of the Icelandic Falcon. In 1952 his eighty-fifth birthday was honoured by a gathering held at Oriel College, Oxford, when he was presented with a commemorative memoir and list of his publications, and his portrait by Harold Speed, which now hangs in the college. He died at Watlington on 2 September 1957.

Close
National Portrait Gallery, London
National Library of Scotland, Edinburgh
Calendars of the grants of probate … made in … HM court of probate [England and Wales]
Scottish Historical Review
Proceedings of the British Academy